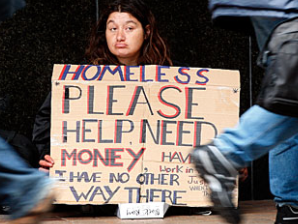 According to Paula Bennett, the above sign is evidence of a ‘positive’ immigration story.

Deputy Prime Minister Paula Bennett has admitted there are more people homeless in New Zealand than there was when National took office.

But she says the reasons for that tell a “positive story”.

Speaking to The AM Show on Friday, Ms Bennett said New Zealand’s quick recovery from the global financial crisis (GFC) and the growing threat of terrorism overseas has seen people flock to our shores.

“New Zealanders decided they wanted to come back to New Zealand and stay here, so as a consequence we’ve had more people in this country pretty much in a really short period of time, and that has put pressure on the housing market – there’s no two ways about it,” she said.

…are you fucking delusional Paula?

She’s looking for a silver lining in a mushroom cloud!

The hundreds of thousands living in overcrowded and dangerous conditions?

The 1600 who die from cold houses each year?

That’s all evidence of NZ being a positive story is it?

What the Christ would she consider a nightmare?

Paula’s argument is fucking bullshit. She’s trying to claim here that NZers coming home because of Terrorism and global recession has created the problems – that’s just not true.

It’s the open door immigration policy that is driving the property bubble and the false growth figures, not NZers returning home!

But Statistics New Zealand data shows in the last 40 years, there has not been a single year in which more Kiwis came home than left.

The exodus peaked in 2012, which saw a net 39,507 New Zealanders depart. It’s since recovered to a net outflow of 1284 Kiwis. On a net basis, most immigrants in 2017 have been from China, India, the UK and the Philippines.

This con job is how the Government is desperately glossing over their market driven failures. National pulled this stunt last week by claiming that homelessness in Hamilton had nearly been eradicated…

The manager of a Hamilton shelter is disputing the National Party leader’s claim that homelessness has almost been eliminated in the city.

…they aren’t even trying to defend their failures, they are trying to paint them as fantastic successes as if we are fucking stupid!

For them, as Minister’s on the pay they are set with the perks they enjoy and with home ownership high within the National Party, it probably is one never ending joy ride.

For those suffering on the bottom and the middle, there is no success story here, and even if there were, what kind of success is this?

The only reason National are so pro immigration is because it creates the false growth numbers they need, it props up middle class illusions of wealth via inflated property prices and because many NZ-Chinese migrants are huge supporters of National (The Blue Dragons) and because many senior National Party MPs are heavily invested in Chinese interests.

These people need to be removed from power.