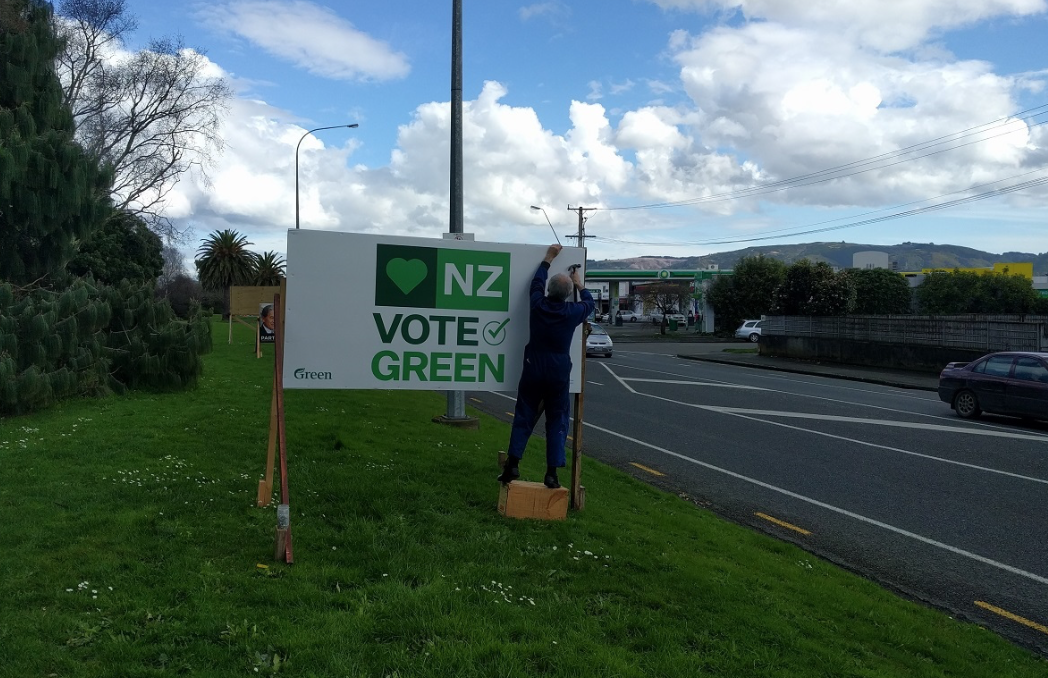 Hutt Valley, 19 August – As part of my contribution to the Green party election campaign, I joined the Green’s Billboard Team #5. Our team was assigned to the Rimutaka Electorate – and it was an eventful day…

We began at 10am, assembling at a private residence in the Lower Hutt suburb of Woburn. Teams were assigned suburbs throughout Lower Hutt and the Rimutaka Electorate.  Vehicles were loaded with timber; corflute sheets of varying sizes; nails, and tools. The weather was cloudy, but sunny and the day continued to warm.

But we were on limited time. The weather forecast was not brilliant for the afternoon. We would have to do as much work as possible in the limited time available.

Then on to Upper Hutt.

The team had previously erected several billboards over the previous weeks and were well-experienced in the technique. Recent rain had softened the ground, making it easier to drive in the stakes to which legs and support-struts were attached;

(Note: not all team members were included in these images. Some did not want to be photographed, others were working on other billboard frames.)

The soft ground that made our work so easy would  prove to be problematic later on.

Several households throughout the electorate were  happy to have smaller corflutes attached to their fences;

The team moved to existing billboards, repairing damage caused by vandals in one instance – and by recent windgusts in another. At Gibbon Street, Green Party members charitably re-erected an ACT Party billboard that had been knocked over by vandals;

Support for the Green Party took an unusual turn when – at one house – I was invited to come for dinner later. (I declined the gracious offer.) It was a difficult decision; the aroma of a spicy Indian dish wafted through the open door as we sought permission from the home-owner to place a placard on her fence.

Around mid-day, a small disaster struck the team. The ground on which our vehicle had parked was softer than we had thought, and quickly became bogged down. No amount of muscle-powered pushing and other ‘tricks’ worked.

At that moment, Labour’s Rimutaka MP, Chris Hipkins and his wife and child were driving past in his trademarked red 4X4.

He slowed and leaned out his window;

“Do you guys need any help?”

We all nodded. No way were we going to turn down his offer of assistance. Besides which, there was probably a clause in the Labour-Greens Memorandum of Understanding on this kind of scenario; “each Party will help each other out in the event of getting bogged down in mud“.

After some careful towing, Chris managed to extricate our vehicle. Had the election been that day, we probably would’ve voted for him on the spot, in sheer gratitude.

So on top of putting up a dozen billboards on frames and fences, Team #5 managed to engage in some inter-party co-operation; Green members re-erecting an ACT billboard, and a Labour MP coming to our rescue!

If we want to change the government, we have to work for it. That means going out and campaigning for Labour, the Greens, or Mana Movement. It won’t happen by itself – only People Power can do it.

We have four weeks to do it, people.