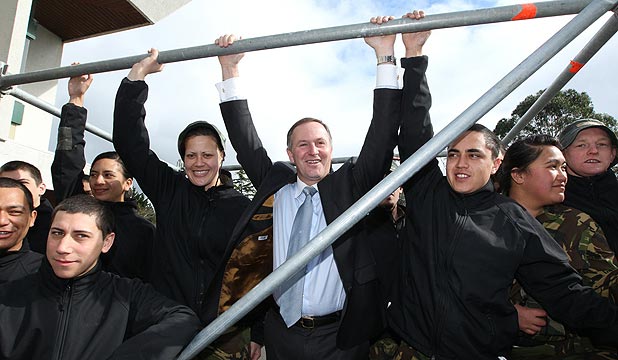 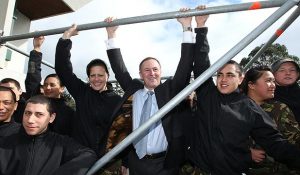 It has been said by a mind far wittier than myself that whilst history doesn’t repeat … it sure does rhyme. The commentator who uttered that forgot to add that on certain occasions, it just outright plagiarizes.

But looking at National’s recent announcement over the weekend of what looks set to be one of its headline election policies, it is pretty hard to escape the conclusion that that’s literally what’s happened here.

I may be young enough to only barely remember the previous National Government, but the first thing which shot through my mind upon hearing Paula Bennett et co do a press conference to attempt to sell ‘boot camps’ for youth offenders was … “we’ve been down this road before”.

For you see, way back in the mists of 2008 – when concerns about nanny-state-ism didn’t literally mean Government MPs eves-dropping on your phone-calls – a recently elevated National Party leader seeking to stamp his mark on ‘law and order’ issues and hopefully win the Prime Minister-ship for the first time, did exactly the same thing.

That man was John Key – and it seems evident now that Bill English, despite not possessing anything like the same levels of thing-masquerading-as-charisma-that-actually-just-means-saying-akshully-a-lot, was taking notes on his predecessor’s path to the hearts, minds, and ballot-boxes of our voting populace.

So this leads to two obvious questions.

The scheme National rolled out in its first term set up “Military-style Activity Camps” (MACs), which sounds like a school holiday paintball program run by a cosmetics company. These took a pretty small number of the more serious youth offenders (about seventeen over the course of the first two intakes – although with capacity for somewhere in the vicinity of 40 per run), and sought to combine the more traditional ‘military discipline’ style of Reforming Your Youth Offender from the Defence Force with a prolonged period of support from the Ministry of Social Development towards reintegrating program graduates into their community.

The results of this program were … mixed, to be fair. On the one hand, there was an observable drop in recidivism rates of the youth offenders in question – specifically, ‘only’ 86% of those who went through the camps went on to reoffend within 12 months of coming out again. And, perhaps more interestingly, many of the offences those 86% then subsequently committed were less severe than those they were sent to the camps for. So maybe a ‘mere’ assault charge or wounding with intent rather than Grievous Bodily Harm or something. Although this is countermanded by another data-set which has a majority of those who reoffended continuing to commit offences of “the same nature and frequency” as what they were up to prior to their exposure to the Boot; as well as, potentially, the information from the first two runs of the program – which had four out of the initial cohort of 17 youth offenders winding up in jail not long after graduating the scheme (i.e. exactly the outcome the boot camps were supposed to prevent).

Still, this is arguably a superior set of outcomes as compared to New Zealand’s *previous* iteration of the boot camp phenomenon – which was scrapped by then-Justice Minister Phil Goff in 2000 due to concerns about a 90%+ recidivism rate, as well as their output of what he termed “faster, fitter, young criminals with the same bad attitude”. This was an assessment echoed by principal Youth Court Judge Alan Becroft – who noted that the scheme’s result were a cohort of youth offenders who were “still burglars, just harder to catch” – thus rendering it “arguably the least effective sentence in the Western World”. (In the spirit of completeness, it’s worth noting that John Key subsequently tabled in Parliament a letter from Judge Becroft which expressed “cautious” support for expanding the program – although somewhat confusingly, the extracts quoted from approvingly by the then Prime Minister appeared to be more generalized commentary on youth offending)

Having said all that, though, it’s difficult to draw meaningful conclusions from the Government’s 2010-2013 ‘boot camp’ policy because the data-set of young offenders being analysed was rather small (86 young offenders over three years – of which, 14 dropped out or were expelled). So while it is tempting to cite things like the Department of Corrections’ own 2012 report on what works (or doesn’t) with Youth Offenders when it says that boot camps tend to have “negligible or negative effects” … it’s worth noting that this document didn’t deal with the Government’s then-still-running boot camp scheme. Similarly, the 2011 comments from the Government’s science advisor, Sir Peter Gluckman, that actual evidence for the efficacy of boot camps was “limited or lacking” appears to have been in reference to the idea of boot-camps for youth offender correction in general rather than the Government’s operation in specia.

Although lest anybody succumb to the common political maxim that “but it’s SURE to work (unlike all the other times it’s been tried) because we’ll get it RIGHT this time!”, the 2011 Gluckman report also notes that there’s a relative paucity of information as to what might make a ‘boot camp’ proposal successful rather than a mere re-run of the ‘fitter offender’ program so widely derided and then scrapped under the previous Labour administration.

Long story short, we don’t even necessarily know if the previous ‘boot camp’ program was notably better than other already-extant schemes the kids might have wound up in – or even, for that matter, whether the 14% of graduates who stopped reoffending is a significant improvement over the number of youth offenders who cease encountering the criminal justice system as they get older precisely *because* they ‘grow up’.

It might have been possible to come to a better determination about the merits (or otherwise) of their scheme, but looking through a succession of comments from learned people on the matter – it appeared that the Government was curiously reluctant to actually put out too much or too detailed ‘hard data’ on its results besides the exceptionally ‘broad brush’ stats cited above.

So in other words, unless there’s some absolutely amazing and cutting-edge research out there which is yet to be released to the public … the National Party’s 2017 Boot Camp proposal is just as much of an ‘experiment’ as their 2008 Boot Camp proposal was. About the only difference that seems to have come to light thus far was Paula Bennett’s statement concerning the Ministry of Social Development’s involvement in the prior iteration of ‘boot camps’ being one of the lead reasons for it being a failure – which is a shame, because on balance, I’d rather suspect that the long-term MSD supportive involvement in a young person’s life would have been one of the positive features of the program due to its rehabilitative rather than punitive functions. Whereas handing the scheme over entirely to the Military, as Bennett’s comment seems to imply, simply appears an opportunity to emphasize the harsher elements of ‘boot-camp’-ism which produced the previous succession of flawed outcomes and ‘fitter offenders’.

Now in terms of just why National’s chosen to announce such a scheme, there are several potential explanations.

One is that with mounting pressure on Bill English over the Todd Barclay scandal – himself a putative ‘youthful’ offender – the Nats have chosen to announce something ‘big’ [or, at the very least, big-sounding] in a bid to ‘jangle keys’ as a distraction from both this and “Jacinda Mania”.

The other of which is that they’ve traditionally campaigned very heavily on being the ‘law and order’ party. Which is fine when you’re in Opposition – but one you hit Government, can start to go very messily when you wind up presiding over a spate of police station closures, and an escalating crime-wave of robberies and standovers driven by your questionably useful cigarette tax-hike.

It’s plain from a number of observable factors that the National Party feels they are ‘losing control of the narrative’ [or at least, their self-appointed role therein] when it comes to law and order; as we can see from not only the strong media coverage of the aforementioned cigarette-raids and shopkeeper beatings … but also through the formation of the New Zealand People’s Party with its fairly direct focus on representing the concerns of the petit bourgeois on law and order issues, as well as the fact that National has been roundly outmaneuvered by first New Zealand First and then Labour with promises of increasing police numbers.

So with that in mind, they’ve chosen to go with the OTHER side of the law and order coin. Namely, Popular Punitive Penal-ism. Because while on the face of it, one thousand eight hundred extra police is probably going to do a much better job at taking offenders [whether adult or ‘fun sized’] off the streets, it lacks that certain visceral vindictiveness of actually getting to say you’re going to get so hard on young criminals that you’ll be throwing them to the military to sort out.

It also has the additional advantage of being a seemingly simple solution to the complaints of every dairy owner who’s been done over recently about how young offenders aren’t deterred by the criminal justice system because they apparently know they’ll just be let off due to their age.

But the trouble with ‘simple solutions’ [particularly the ‘seemingly’ simple ones] is that they’re often neither simple nor a solution once examined more closely. And given the rather questionable ‘evidence’ on the success of ‘boot-camp’ style regimens in the past here, there’s a very real chance that this most recent proposal will similarly wind up coming a little unstuck upon further scrutiny or sometime after its actual implementation.

This is rather concerning, because of the potential impact this might have on *other* policy-proposals that might *actually* make a difference in the lives of our young people.

We already know that the National Party takes a rather dim view of expanding ‘social’ spending when there are wafer-thin ‘surpluses’ to be had; so in a very real sense, the millions that will likely go into this program (thirty million dollars, to be precise, for a few dozen offenders) will mean that similar funding is unavailable for measures which seek to address at-risk youth BEFORE they get to the stage whereby we’re packing them off to ‘boot camps’. This is despite the raft of evidence rather strongly suggesting that the earlier one intervenes, the greater and more positive the impact [and thus the per-dollar efficiency] a policy is likely to have.

But also, other much more evidentiary-based uses of the military in partnership with other government agencies to turn young lives around may also suffer – whether due to reputational association, or decisions concerning the allocation of resources.

One example of this is the rather excellent Private Member’s Bill put forward by New Zealand First MP Darroch Ball, entitled the ‘Youth Employment, Training and Education’ bill, which sought to run a scheme similar to the already-existing LSV-platoons as an alternative to the latter years of secondary school for kids who could benefit from it. That, at least, could put towards a mound of evidence for why it would make a strongly positive difference for a much larger pool of at-risk young people than the Government’s re-rubbed ‘boot camp’ proposal.

But of course, the Government voted that bill down despite not ever really being able to give a coherent reason why.

It now appears that one of their motivations was to avoid any ‘stealing of thunder’ from their latest policy announcement.

Which leads me to conclude that the only thing that’s HARDER BETTER FASTER STRONGER from National at present – is the mounting feeling of desperation they’re experiencing in their bid to cling on for dear life into a Fourth Term.

Oh, and as far as the proposed curfew for young people goes … that’s lifted fairly directly from an episode of The Simpsons. Didn’t work there, either.