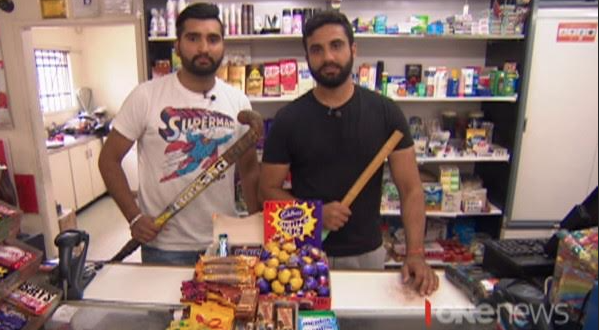 There’s something seriously disconcerting going on out there in the Auckland community at the moment. For several months now, barely a week has passed without a story about some lowlife thugs violently doing over a convenience store, liquor shop or dairy, frequently injuring staff in the process.

The owners and operators, predominantly Indian, feel somewhat powerless to stop them – and with good reason.

In an ideal world that’s sadly unlike the one we presently reside in, police would be on-hand to quickly and expeditiously respond to any and all such calls of a ‘robbery in progress’. But due to a fundamentally callous and cost-cutting government, our law enforcement is cripplingly under-resourced to actually do anything about the problem. Shopkeepers dialing 111 are told that Police are too busy to respond; or have to feign that they themselves are equipped with firearms in order to get the attention of law enforcement. Impending police station closures will only exacerbate the issue, and for the moment we’re left with both the Police Minister and the Police themselves urging a greater role for the “community” in crime prevention.

Or, in other words, as Homer Simpson famously campaigned on during his own tilt at a local body governance position … “Can’t Someone Else Do It.”

But the trouble is, the clearest and most obvious way in which shopkeepers are able to take the problem into their own hands as it were, is carefully circumscribed by law.

If a dairy-staffer is suddenly inundated with rambunctiously rampaging ragamuffins rapaciously ransacking as many kilograms of cigarettes from his store as they can possibly carry … said proprietor is pretty much powerless to stop them. They can’t exactly physically restrain a perpetrator – there’s no specific legal provision to explicitly allow them to do so. The closest law I could find on the subject, s53 of the Crimes Act, tightly constrains the forms of physical intercession available to anyone seeking to use reasonable force in defence of property; and there’s strong anecdotal evidence that shopkeepers are simply too afraid of legal repercussions from even something as simple as physically restraining an offender and waiting for the cops to arrive to actually and actively take control of the situation.

They’ve unfortunately got good cause to be trepidacious. It wasn’t so long ago that another shopkeeper – a Mr V. Singh – found himself on the wrong end of criminal assault charges after using reasonable force to defend himself and a co-worker from drunken teenagers armed with a knife who’d invaded his store and stabbed him.

Fortunately, in Mr Singh’s case, the charges were thrown out after a certain high-profile defence lawyer offered to get involved and fight Singh’s case free of charge – but the chilling effect upon shopkeepers feeling able to defend themselves and their establishments (a deliberate motivation for the police in bringing the charges in the first place) has remained.

I’d say it was only a matter of time before somebody was killed – but incredibly sadly, that’s already happened.

So what do we do about this sorry and evidently escalating situation.

Well the obvious answer – and inarguably the best one – is to properly resource the New Zealand Police to actually do their job. New Zealand First secured a thousand extra front-line police plus three hundred support staff the last time we were proximate to Government between 2005-2008, and it’s incredibly disheartening that National appears to have undone our good work at the stroke of a series of pens over the last few years. This isn’t just an armchair pundit’s opinion, however – a massive eighty six percent of front-line officers themselves believe that our Police lack the resources they need to properly do their job. And in light of the Government’s frankly inexplicable decision to close a number of cop-shops in the name of cost-cutting, community access to policing is only going to get worse.

So it seems, on the face of it, that improvements in both the quantity and quality of policing to address this issue are off the table.

We must therefore look for alternative solutions, pending the election of an alternative government.

Some shopkeepers want a law-change to explicitly empower them to be able to physically restrain malcontents rather than having to let them walk out the door. While this would obviously solve some of the short-term issues thrown up by the present police shortage – as the inevitable (and lengthening) delay-period between a 111 call being logged and an officer turning up at the scene would no longer provide an enviable opportunity for the perpetrators to melt into the ether – it’s a clearly imperfect solution. If there are a half a dozen offenders flash-raiding your shop, as seems to be the new favoured M.O for these sorts of engagements, there’s a somewhat limited chance that the one or two staff on-site are likely to be in a position to seriously consider restraining anybody.

That is not to say such a proposal is completely lacking in merit. As applies smaller-scale heists with more limited numbers of offenders such as those common in supermarkets, knowing that shopkeepers and/or security staff have the lawful power to physically detain you while the cops arrive could form a deterrent to committing crime in the first place. The lack of such an easily enactable provision certainly does, at present, encourage the opportunism inherent in this lower-level offending.

At the more serious end of the spectrum, there have also been demands for a clarification of our Nation’s self-defence laws. At present, the way these work is that under s48 of the Crimes Act, people are justified (and therefore legally protected) in using “reasonable force” in defence of themselves or others. The trouble is, “reasonable force” is a highly nebulous standard – and subject to quite a myriad of interpolating factors.

Ordinarily, it’s up to Police to make a decision as to whether the force used was reasonable, and ‘filter out’ people who shouldn’t be put through the legal system as a result; but the number of charges being thrown out pre-trial would appear to indicate that the Police are often erring too far on the side of caution when it comes to the use of their discretion, and instead taking an approach of leaving such determinations more exclusively up to the judiciary.

While it might seem like a sound legal practice to insist that any application of force in self defence ought to be one that can stand up to exterior scrutiny in court, the plain fact of the matter is that legal bills and other associated costs of proving one’s innocence are highly expensive – which leads to the inescapable conclusion that the extant regime is forcing morally blameless people (the victims in these situations no less) to be financially penalized for what later turn out to be perfectly legal (even occasionally outright commendable) actions in self defence.

Clearly, there is some considerable scope for either law or process reform in this area – and that’s why in the run-up to the 2014 Election, New Zealand First campaigned upon a somewhat related legislative proposal designed to cover homeowners using force in self-defence against burglars and other intruders. NZF also made strongly approving noises about clarifying the ambit of self defence laws in order to give a greater degree of certainty to people having to use them, so as to hopefully avoid unfortunate repeats of the undesirable situation outlined above.

A final point worthy of mention is that as one of the core underpinnings of this recent wave of convenience-store targeted crime is the increase in cigarette-prices due to excise tax hikes (which have made cigarettes both less affordable, and more relatively valuable on the black market as a result), there remains every likelihood that both the level of offending – and the brazenness with which it is carried out – will only continue to get worse.

All things considered, my innate liberal proclivities mean that I remain somewhat uncomfortable with the notion of ordinary citizens having to take the law into their own hands. Not simply because of the risks inherent to such a position that a defender might go too far; but also, and more fundamentally because in a modern, nominally first-world Nation … this isn’t how things ought to be. People shouldn’t *have* to take the law into their own hands, because our Police ought to be properly resourced. Shortfalls in political will and material support for law enforcement are not factors that should be allowed to force us into a corner and contemplate either accepting crime as a day-to-day cost of doing business here in New Zealand, or put the onus on regular New Zealand citizens to defend themselves and their property from the economically violently indigent.

And yet, here we are.

It shouldn’t take another shopkeeper being stabbed, badly beaten, or even killed to get this issue taken firmly in hand. However we choose to do it.