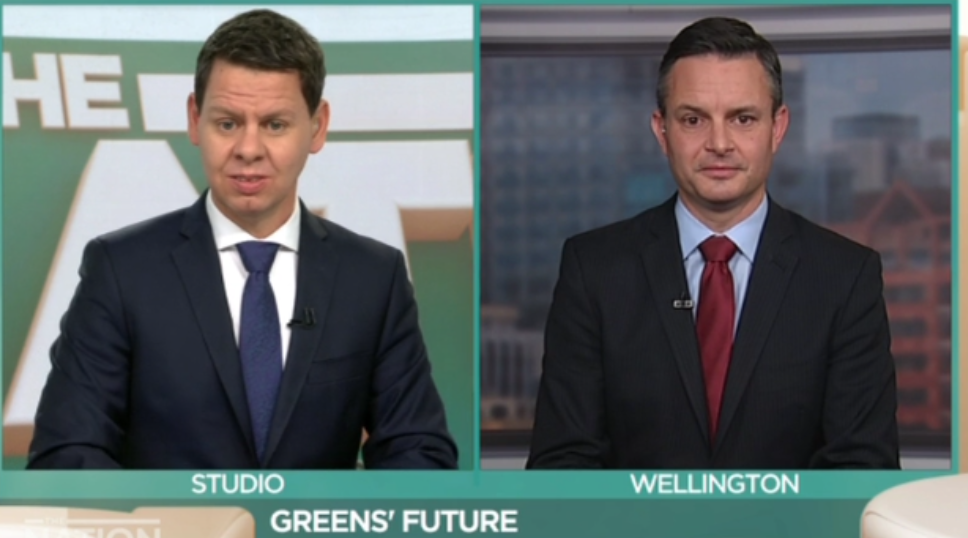 For a while, the interview was low-key, with Gower exercising old school  journalistic professionalism. It’s as if someone slipped him a nice camomile tea laced with a couple of shots of  bourbon and just a smidgeon of valium.

The interview progressed well, with James Shaw being somewhat irritatingly ‘coy’ about the Green’s campaign re-set. Gower kept his frustration in check as Shaw did the dance of the Seven Veils, but without the peeling-away of said veils.

Then, at 6:10 into the interview, there was this jaw-dropping exchange between Gower and Shaw;

Patrick Gower: Well, an important aspect of that is what Metiria Turei’s venture around this benefit fraud was all about, which was empowering the disenfranchised. Now, where do they sit — those people that she tried to reach, or, as you’ve argued, did reach now they’ve seen someone who’s stood up for them slapped down and destroyed, effectively? What message does that send to those people that you were trying to reach that this is what happens when someone speaks up for you?

James Shaw: Yeah, Patrick, I have to say that’s been a huge personal concern for me is — what message does that send? And so it is a really important part of our campaign that the people that have come forward over the course of the last four weeks in response to Metiria’s campaign who said, ‘Finally, I feel like there’s someone in the House of Representatives who actually represents me,’ we are going to be speaking directly to those people and say, ‘The Green Party is here for you. We still stand for you.’ And it is our goal to end poverty. I mean, Metiria herself said that is was always bigger than her.

Patrick Gower: Yeah, but what do those words mean when what they see is she stood up for them and she was taken down by her own party in some senses? You guys didn’t stand behind her.

James Shaw: Patrick, we absolutely stood behind her. She had the full support of me, the caucus, the party executive. I mean, we had thousands of volunteers all over the country.

Why – when listening/reading his words – does one feel rising nausea and anger?

And why does the word “hypocrisy” ring loud?

Perhaps I’ve crossed over into a Parallel Universe… Bernie Sanders is still President of the United States, right?

Some background info for Guyon Espiner

Time to speak up for Metiria Turei!

Time to speak up for Metiria Turei! (Part Rua)

Metiria Turei has started something