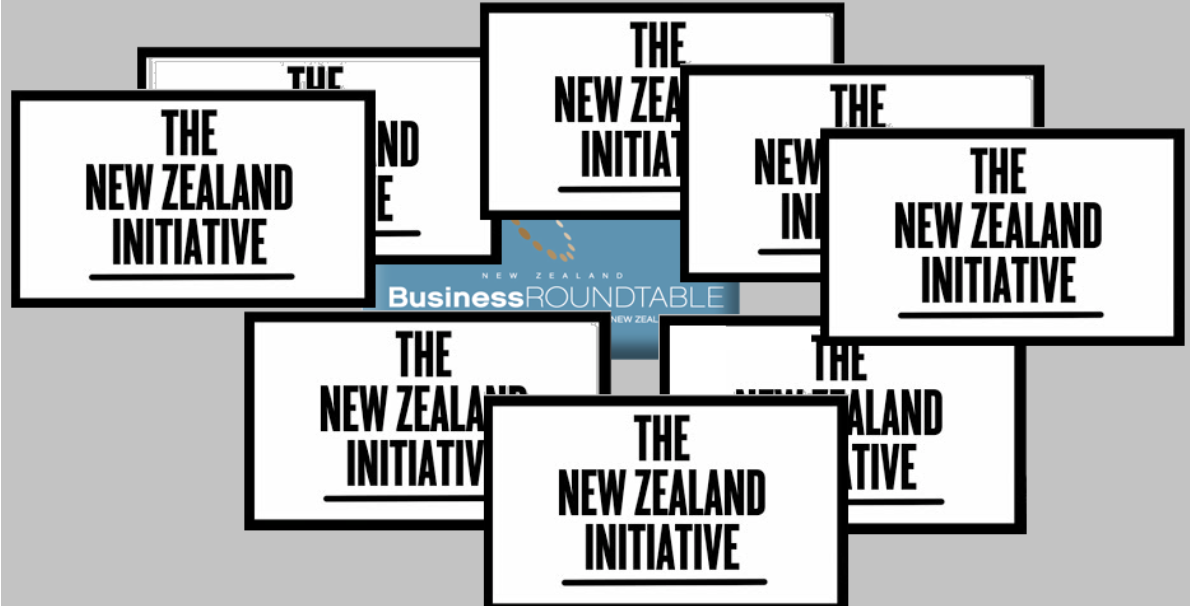 The title of the  “report” sneakily implies our education system is not transparent; is un-professional; and our schools un-supported.

Amongst the several vague recommendations was this one;

True to New Zealand’s self-managed school landscape, the government largely lets school boards and principals get on with leading their schools. However, in other respects, school leaders can be hamstrung by bureaucratic restrictions; for example, the Ministry prescribes how school leaders should spend parts of their teaching resource budgets.

Recommendation 6: Effective leaders should be trusted as true professionals and granted total budget autonomy to lead their schools.

“Total budget autonomy” is code for bulk-funding – a favourite agenda from the New Right.

Bulk-funding had previously been introduced as part of National’s “Ruthenasia reforms” in the 1990s. It was done away with by the Labour-Alliance government in 2000.

The change would set a “global budget” for each school, delivered as cash instalments for school expenses, and a credit system for salaries.

According to the documents, this would mean:

• Principals would determine the split between cash and credit, with the flexibility to make adjustments during the year.

• Unspent credit would be paid out at the end of the year and a process for recovering credit overspends would be established.

• Teaching staff salaries would be charged against the “credit” portion at an average rate.

• Non-teaching staff salaries would be charged against the “credit” portion at actual cost.

The global budget system would not be the same as the controversial bulk funding of teacher salaries that sparked protests 20 years ago, the proposal said. The documents said: “This is a significant difference from historical bulk funding proposals which would have seen schools charged the actual salary.”

The reaction was predictable, and Post Primary Teachers’ Association (PPTA) president, Angela Roberts, spoke for many when she warned;

“It is bulk funding. It is minor technicalities that make it something different, and I think it’s very cynical of the ministry to think that they can con people with a change in language.”

The schools get to decide how they spend that, how many teachers they purchase effectively and how many teacher aides. So schools will be incentivised through the averaging out to have cheaper teachers or fewer teachers because they can cash that money up.

Bulk funding was resoundingly rejected by the community 20 years ago because everybody understood the cost would be borne by the school when the government couldn’t be bothered putting more money into the system.”

Opposition to Parata’s Bulk-Funding-In-Drag plan was met with heated opposition by parents, teachers, school principals. Donna Eden, a teacher with 20 years’ education experience explained why she was so vehemently opposed to “Global Funding”;

“Teachers really don’t like bulk funding, so much so that they have been out of the classrooms meeting and rallying. And they’re talking to anyone who will listen about how our kids will be worse off.

Why? Well, it will mean bigger classes and fewer teachers. It will mean our kids have less time with their teacher because instead of sharing him or her with 15 other children there will be 30 or more classmates needing the attention of their kaiako. It will mean less support for the kids that need it. It will mean fewer teacher aides for fewer hours.

It will likely mean untrained teachers in the classroom because they will be cheaper to pay.

It will mean winners and losers, and that, my friends, is not okay. Every child deserves the best, all of them, all over our country.

It’s simply that schools will be given a lump sum of money. And from this lump sum they will pay teachers’ salaries (which are currently centrally funded, meaning they don’t cost schools) and for everything else (think the power, water, supplies, first aid supplies, the caretaker, the office staff , support staff like teacher aides, any class room resources…)

There will be a separate pool of money for maintenance – property repairs and the like.

Why is it bad news?

Firstly, because there is no new money. It’s just moving around the money that is already there. And it’s already not enough.

For the first time ever school operations grants, the cash that keeps schools running, have been frozen.

While costs rise, this budget won’t keep up. This means cuts to what schools can offer. It will start with trimming the extracurricular stuff. It won’t stop from there.

Hekia Parata is looking to remove the caps to class sizes and the guaranteed teacher funding this brings. It will mean that classes will get bigger – they will have to in order to stay within budget.

It’s like trying to do the grocery shopping with the usual budget when you have four extra people staying for the week. It just won’t stretch; something will have to give.

If it comes down to a choice between paying the power bill and paying a teacher, it is principals and boards of trustees that will have to decide who goes. What a horrible decision to have to make.”

On 18 November last year, Parata caved to mounting public pressure and announced that National would not proceed on it’s “Global Funding” policy;

“I have therefore recommended, and Cabinet has agreed, that the global budget proposal not proceed. The global budget was a mechanism for payment, not for determining the level of funding, so this decision will not affect the core purpose of the review.”

Barely a year later and the NZ Initiative/Business Roundtable has attempted to breathe life back into Bulk Funding/Global Funding. This time referring to the model as ‘Total Budget Autonomy‘. (No doubt  Crosky-Textor or some other tax-payer funded spin-doctor will come up with some new clever, shiny name.)

But it’s still a pig. Perhaps with a new shade of lipstick. But a pig still.

The question is, why the Neo-libs keep beating the same drum?  Why keep trying to implement a policy that has been tried; failed; and almost no one wants.

More importantly, the evidence is that Donna Eden’s fears are well-based and grounded in reality.

New Zealand has had bulk-funding in another area of the State Sector – and it has proven to be a dismal failure;

Cost pressures mean DHBs have not been fully funded to cover wage increases for the 40,000 workers whose contracts are up for renegotiation shortly.

“The fiscal strategy presents some tough choices for Budget 2015, there are a number of fiscal pressures across the social sector, and Ministers will need to review options and trade-offs to determine an appropriate Budget package.”

The Treasury document that Ms Kirk quotes makes this observation on funding DHBs;

There are material cost pressures affecting the Ministry-managed NDE [non-
departmental expenditure] service lines that need to be managed as part of
this process. These cost pressures will include demographic demand growth,
wage and price inflation, and other factors. As for DHBs, it is unlikely that
these pressures can be fully funded, so we will be looking to the sector to
deliver substantial efficiencies. To maintain current levels of service
provision, it is likely that a reasonably large injection of new funding will
be needed – in addition to the $275 million already agreed for DHBs – or
Ministers will need to make choices on what services are to be altered or cut back.

Note this bit; “…cost pressures will include demographic demand growth, wage and price inflation, and other factors. As for DHBs, it is unlikely that these pressures can be fully funded, so we will be looking to the sector to deliver substantial efficiencies”.

Treasury’s admonition that “it is unlikely that these pressures can be fully funded” for DHBs is borne out by the number of Boards that are in deficit – and  worsening. A forecasted $58.7 million deficit has blown out to $89.9 million. Half of DHBs either in the red, or perilously close to it;

In the case of Capital and Coast DHB – currently $28 million in deficit – it is noteworthy that there financial woes started in the mid-1990s;

In 1995-96 Capital Coast Health reported a deficit of $26m, which the following year grew to $70m. Chief financial officer Tony Hickmott said the $68m debt hole left by the construction of the regional hospital in 2008 had contributed to deficits for the past 10 years.

Increased demand for services, high labour costs, increased complexity of patients, and the increasing and ageing population had compounded the issue.

Building construction. Labour costs. Demand for services. Increased complexity. Increasing population. Each one of those factors can easily be translated into the education sector which also requires building upgrades or building entire new class-rooms; growing students rolls; increasing special-needs; and rising population due to National’s exploitation of migration to create the illusion of economic growth.

How long would it be before schools found themselves in precisely the same precarious  financial woes that our DHBs are currently suffering?

As things currently stand, parents/guardians are having to dip more and more into their pockets to pay “school donations”, to make up for obvious shortfalls in the Vote Education budget;

Of course, the National government still claims – without a hint of self-awareness of the Big Lie – that education is still free in New Zealand;

It’s free to go to a state school — but the school can ask for donations towards their running costs.

But at least one school – St Heliers – is unashamedly upfront in why school “donations” are necessary;

A donation is requested of parents to contribute towards the shortfall in funding from the Government.

Even with direct Ministry funding, schools are still having to make up a “shortfall in funding from the Government“. This dire situation has been compounded by National’s decision to freeze school operational funding this year;

The above Herald story goes on to report;

The targeted approach means more than 1300 schools will get less money than they would have received, had that money been used for a general increase.

The difference ranges from a few hundred dollars up to $24,000.

About 816 schools will get more, and information on a further 242 schools is suppressed for privacy reasons because fewer than five students are at-risk.

Now imagine the funding constraints that  schools would have to deal with if Bulk Funding/Global Funding/’Total Budget Autonomy’ was re-introduced for their sector.

But we don’t have to imagine, do we? Because half the District Health Boards in this country have already shown us what would be in store for schools throughout the country.

Which is something that the  NZ Initiative/Business Roundtable seems to have studiously over-looked when they compiled their rubbish report, ‘Amplifying Excellence: Promoting Transparency, Professionalism and Support in Schools‘.

Never under-estimate the ability of the New Right to suggest policies that that been tried, tested, and failed. Just keep repeating the experiment over and over and over again.

One day the result will be different.

Of course it will. Just ask Albert Einstein.

The Spinoff:  A teacher tells you what you need to know about bulk funding

Fairfax media:  Parents prop up schools to tune of $250m

NZ Herald: ‘At risk’ school funding revealed – with 1300 to lose out under new model

Save our Schools:  Parata backs down on bulk funding plans

The Legacy of a Dismantled Prime Minister