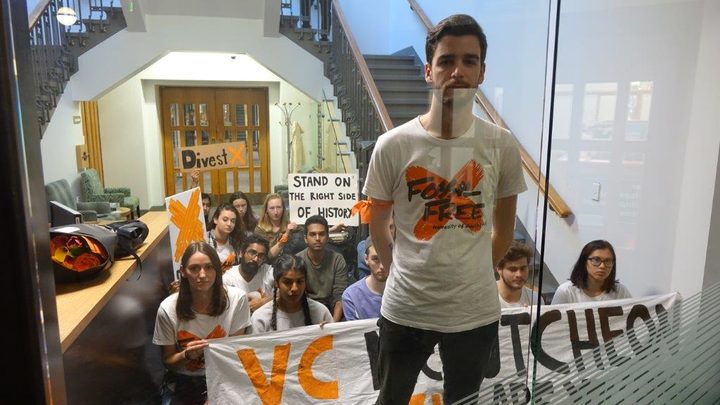 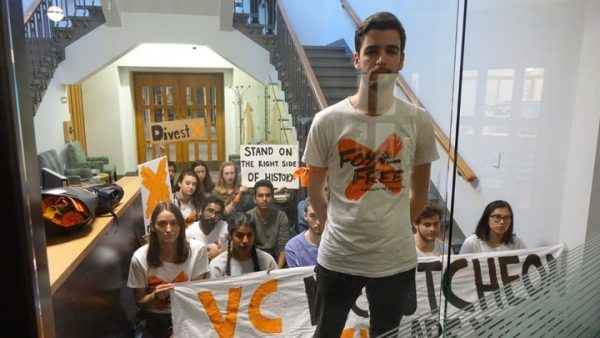 I don’t have a history of breaking the rules. Ever. I was that kid who was scared of wearing a hair-tie the wrong shade of blue.

Today, on May 29 2017, I am peacefully occupying the Vice Chancellor’s wing of the University of Auckland with 13 fellow activists. We are demanding that our Vice Chancellor Prof. Stuart McCutcheon actively support divestment from coal, oil and gas extraction.

In 2013, my first year of university, I heard some environmental campaigner guy called Bill McKibben tell a story. It was a story of maintaining the status quo, of fearing transition, and of valuing profit above the well-being of people and the planet.

In our Vice Chancellor’s story, we are hypocrites by divesting from coal, oil and gas while we remain dependent on them. In his version, divestment is a tokenistic move which we should avoid, because it won’t turn around climate change on its own.

I’ve been blind all my life. I live in a first-world country and yet I often have to work twice as hard to overcome access barriers that sighted people don’t face. My mother always tells me life’s not fair. But that doesn’t mean we shouldn’t try and make it fairer.

Two and a half years ago, a group of university students, including me, started explaining Bill McKibben’s story to our Vice Chancellor, the University Council and the University Foundations. We reminded them that universities are the critic and conscience of society, and that if they were serious about their efforts to kerb climate change, they would take all practicable steps not only to reduce their own emissions but also to stigmatise the industry which is responsible for polluting and wrecking our planet. We even cited the University’s Strategic Plan. “we cannot plunder the future in order to pay for the present”.

I still don’t like breaking rules, at least those which have a good reason for existing. There are very good reasons why laws against trespass exist. I know.  I also know about the support for my university to divest’ from 3385 petition signers, 240 staff and 23 student organisations including the Auckland University Students Association. I know how many respectful, articulate and well-informed letters, emails and reports we’ve written and continue to write, and I know how many meetings with university officials we’ve presented at.

It’s stuffy in this room, just down the stairs from our Vice Chancellor’s office. I’m dehydrated, the concept of time feels off kilter and I’m reminded of long-haul flying. The plane is currently the ultimate carbon emissions culprit, perhaps. The plane was also once revolutionary, certainly. It remains a connector of humanity, a crosser of geographical boundaries that ultimately bring us closer to each other.

Across at least 76 countries, 732 institutions and over 58,000 individuals have made fossil fuel divestment commitments. And a couple months ago, the CEO of the multinational oil and gas giant Shell announced  that the “biggest challenge” the company is facing is “the fact that societal acceptance of the energy system as we have it is just disappearing”.

We just sung to the Vice Chancellor. * “Do you hear the people’s call? Support divestment for us all. We won’t move until we’re done. We will fight until we’ve won”.