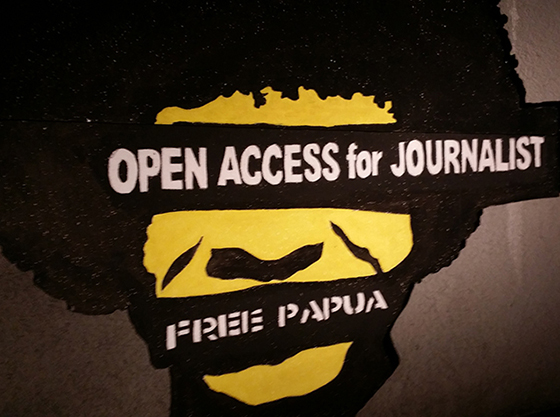 Indonesian hospitality was given a rave notice this week for hosting World Press Freedom Day 2017, but it was also given a huge black mark for its “gagging” of free discussion over West Papua violations.

Four days before the WPFD event got under way, prominent Papuan journalist Victor Mambor had warned in the New Internationalist that Indonesian double standards had imposed a silence over West Papua.

Even a Papuan protest outside the Jakarta Conference Centre venue was kept at the margins, ensuring most of the 1300 journalists, media academics and communication policy makers from 90 countries were unaware of the shocking press and human rights violations that continue almost daily in the Melanesian provinces of Papua and West Papua (collectively known as West Papua).Al Jazeera broadcast the most comprehensive television report from its Jakarta bureau on media freedom and West Papua with both Titro.id website and The Jakarta Post also carrying reports.

But for the rest, mostly silence.

Wenda was arrested and beaten by police while covering a peaceful demonstration in support of a proposed United Nations referendum on self-determination in Sentani, a suburb of Jayapura, West Papua’s largest city and regional capital.

Global media freedom organisations such as Reporters Without Borders (RSF) and the International Federation of Journalists (IFJ) immediately carried reports but this astonishingly didn’t spill over into repercussions at WPFD.

As director of the Pacific Media Centre taking part in the Southeast Asian Consultative Roundtable on a Special Mechanism for the Protection of Safety of Journalists, I raised a plenary question about the “silence” over West Papua violations and got an informative answer from Atnike Sigiro of Forum Asia.

But then back to the silence.

Impressive ‘side forum’ on Papua
I was privileged to be one of the three main speakers at the public “side forum” on a “Free Press in West Papua” seminar that night along with Victor Mambor, chief editor of Jubi and a former chair of the Papuan chapter of the Aliansi Jurnalis Independen (AJI); human rights lawyer Usman Hamid of the newly formed Amnesty International Indonesia; and moderator human rights lawyer Veronica Koman.

The seminar had a packed audience, including the IFJ’s media rights barrister Jim Nolan, and impressive Papuan theatre props and the bird of paradise pen logo.

During the evening, I spoke about President Joko “Jokowi” Widodo’s broken promises on West Papua and developments about independent media coverage and the success of solidarity networks, including the Pacific Media Watch freedom project.

“Indonesia as host of WPFD wanted to convince the international community that media freedom is in fact a priority,” says Mambor.

“Unfortunately, the Indonesian government’s record does not match its rhetoric, particularly in Papua and West Papua. These two provinces [that make up the region of West Papua] have faced serious issues: restrictions are placed on foreign journalists, while violence and discrimination against Papuan journalists and bribery are common occurrences.”

Indonesia ranks 124th out of 180 on the RSF 2017 Press Freedom Index – a slight improvement on last year.

Journalists face harassment
However, research by the independent journalists union AJI shows that only 15 foreign journalists – including two New Zealand radio television crews – had been allowed into the region since then.

And many face serious obstacles or actual harassments and detentions.

Writing in the New Internationalist, France 24 journalist Cyril Payen, whose 2015 documentary Indonésie: la guerre oubliée des Papous (Papua’s Forgotten War) was condemned by Indonesian authorities and led to the journalist’s “banning”, said the president’s promise was “too good to be true”.

The French Ambassador in Jakarta was summoned to the Ministry of Foreign Affairs, says Payen.

“During the tense meeting, the diplomat was told I had ‘betrayed’ their trust and that my film was ‘biased’. And as a result, I would be denied any Indonesian visa from that day onwards.

“The president’s promises had not lasted long.”

Asep Komarudin, research coordinator of the Jakarta Legal Aid Institute for the Press (LBH Pers Jakarta), says a recent clampdown on websites raising issues of human rights violations is because the government claims that they include “separatist” content.

“We need to ensure that any restrictions meet accepted human rights standards,” he says.

Komarudin adds that websites should not be restricted unless there is a “clear, transparent” process recognised by law and carried out by an independent body -“not by the government”.

Winner of this year’s US$25,000 UNESCO Guillermo Cano World Press Freedom Prize is Eritrean/Swedish journalist Dawit Isaak, jailed 16 years ago by Eritrean authorities without charge or trial in a crackdown against the media.

His daughter, Bethlehem, gave a passionate speech accepting the award on behalf of her father.

The declaration has set down 74 articles that call for the commitment of all stakeholders to support free, independent and pluralistic media through the promotion of freedom of the press and expression in the advancement of the Sustainable Development Goals (SDGs).

“We see the importance of Agenda 2030 on SDGs, particularly goal 16 on promoting peaceful and inclusive societies for sustainable development,” Zabrina Holmstrom of the Finland National Commission to UNESCO told the conference.

“Let’s use the adopted Jakarta Declaration preluded in the Finlandia Declaration [last year],” she said. “We need critical minds for critical times. Stand up for your rights. There can’t be a compromise in freedom of expression.”

But that also means no compromise over West Papuan freedoms and justice.