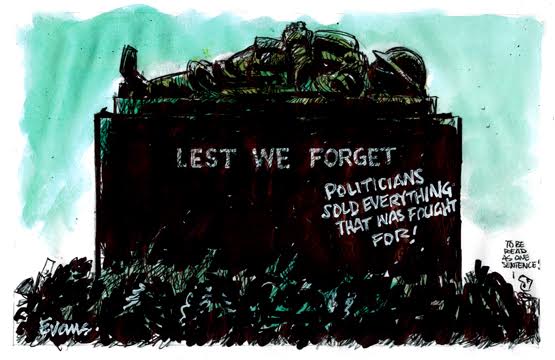 Anzac Day is important to remember because of the utter futility of being part of an imperialist military alliance.

New Zealand casualties in that war, killed or wounded, were 58%. That is equal to one-quarter of the adult male population. Our death rate of those who served at 16.6% was higher than that suffered by Germany!

“The total number of New Zealand troops and nurses to serve overseas in 1914–18, excluding those in British and other Dominion forces, was 100,444, from a population of just over a million. Forty-two percent of men of military age served in the New Zealand Expeditionary Force, fighting in the Gallipoli Campaign and on the Western Front. 16,697 New Zealanders were killed and 41,317 were wounded during the war – a 58 percent casualty rate.”

Although numbers are difficult to estimate accurately the German losses are thought to be around 13% of those who served. (see War Losses Germany)

This was because of the utter contempt that the British empire’s officer corps (drawn largely from the more stupid sons of the aristocracy) had for their own working class and peasant troops.

Captured officers from the other side were treated in a far superior manner than those of their own troops.

This war was strongly opposed by the fledgeling Labour Party in New Zealand and some of its leaders were expelled from parliament and went to prison for their stand.

The British empire was a horrific colonial enslaver of hundreds of millions of human beings. Millions died as a direct consequence of their rule. (See “Five of the Worst Atrocities carried out by the British Empire“)

There is nothing in that history that needs to be celebrated.

What we should be celebrating is the heroic stand of the labour movement at that time. (See Voices Against War)