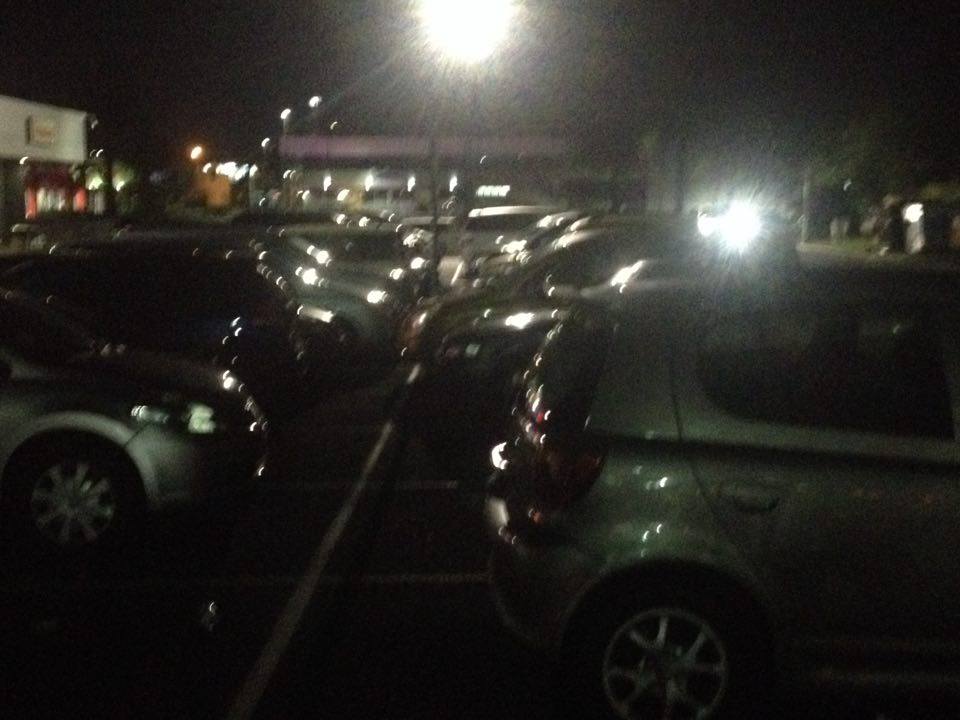 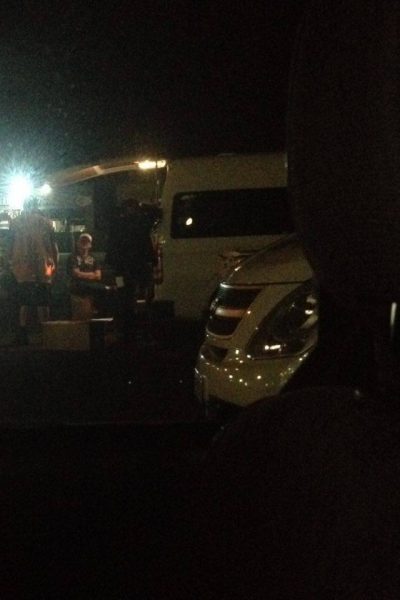 Starting out on this blog, I intended to look into Millennials on the move, escaping the rent trap and redefining the “good life” from home on the range, to home on the road.

Armed with Google and the #vanlife, my search took me through the highs of the movement to a community of inspiring vehicle dwellers, tiny house builders, shared-space organisers, off-grid homesteaders, environmentalist communities, and YouTube celeb status stealth campers. Butut beyond these highs was a great number more lows for everyday people.

There I found families in cars too afraid to get help, fearing Child, Youth and Family would tear their family apart for the lack of a stationary roof. Here were inimum wage or part-time employees having to choose between a car or a home: between gas or food or rent.

Beyond the innovative and inspiration of this community is something else that’s more important.
I avoided anything #vanlife while searching as it seemed to paind over and somehow soften the hard edge of suffering of a much larger group of cara-dwellers whose photos were less than “Instagram-worthy”.

I settled on the study of ’Walmart City’, a nationwide community of vehicle dwellers sleeping overnight in Walmart carparks in the US. Sure the conditions these people lived in were far less than ideal and Walmart – as the exemplar of the job-chewing corporation – has a big part in the problem. But I could also see that it also provided a safe place for people to sleep, cook, eat, wash etc without harassment from security or law enforcement.

Kind of the equivalent of not kicking you so much when you’re down that you lose the ability to be useful to them at all.

Coming back home,, I started to look at New Zealand vehicle dwellers and found a disproportionate amount of airtime given to the #vanlifers – and next to nothing for the larger group of poverty-stricken New Zealanders not living,rather just surviving in vehicles.

This is not to criticise or detract from the awesomeness of #vanlife (which provides a some sort of answer to the problem of povertybut I can’t be complicit with the medias use of #vanlife to cover over the more pressing issue of New Zealanders struggling quite literally in our streets.
So who are these people? Are they lazy, uneducated, unskilled? Do they struggle with gambling addiction, crime or mental health issues? Unemployment and financial mismanagement? Are they driven by loan sharks and the foreclosure of homes? Or simply trying to feed too many mouths on welfare?

Short answer to these question, no. But talking to this community I learnt that the main reason for their vehicle-dwelling was the huge gap between wages and rent. There were also some who couldn’t afford to study because part-time work didn’t cover expenses. Or when student loan repayments took just a little too much out of their low wages for them to have enough to rent a home.

These people were mostly employed, studying, or had studied.They’d given themselves the magic ticket to a better life qualification (along with a large loan), yet they often found themselves without a job to their chossen field. Instead theyfound themselves on minimum wage struggling to make ends meet.

Attitudes towards WINZ were less than civil with good reason. Fears of children uplifted, the cruel treatment of beneficiaries and the disincentivisaiton by the system towards the often only available low paid or part time work were major factors. Punitive policies dished out for those without a fixed abode seeking accommodation supplement and tax credits meant work and income had become less useful to these people than the limited work they could aquire and the total downsizing of their living conditions.

Basically the consesus was “their help is no help and it costs me more than it pays not just finacially but emotionally and mentally.

WINZ had become for these people a bigger burden to bear than moving into and living in their car.
So these people have a car often have both an education trade or skill and a job and or study but where do they park?

Freedom camping areas are limited, often not in residential or industrial areas where these people’s jobs or education providers are and restrictions relating to self contained certification of vehicles means many are not allowed in these areas anyway.

Freedom camping areas are really designed for travellers to see New Zealands natural beauty, not for citizens to function in a local community.

So I went on a hunt for New Zealand’s Wallmart city. Which large organisations/ corporations parking policies allowed for overnight camping like Wallmart?

Ringing around the stores asking to park my van and sleep in it for the night, Bunnings staff took to solving my problem like any other diy project I might amble into their isle with.

Staff told me where I could park, the best places to park, the most popular places to park throughout NZ and more specifically helped me with information for my search in Auckland.

North, South. East and West Bunnings staff had me covered, they even tracked down the stores without locked gates so I could get out in the event of a fire. They searched for and identified their carparks that happened to be busy or well lit or close to amenities because of neighbouring stores.
Staff seemed to know their carparks as well as their stores and even warned me off certain areas having trouble with break ins or that had Police patrols at the moment. They were helpful right down to suggesting diy projects I might consider for inside my van to make life more comfortable. every store I rung and every person I talked to was helful and offered support without being condescending, judgemental, or pitying.

Following these instructions melded together into a kind of road map, I set out to see the carpark campgrounds for myself. Starting in the North, I set myself up and watched as cars stayed longer than store closing and still more arrived a good hour after the doors shut.

Sure enough as it got darker I saw blue phone lights flashed about visible from the back windows of the cars, one man got out to smoke and stretch his legs, a dog owner let their dog sniff about around the car sand a young woman sat typing in the passenger seat with the glovebox forming a desk for her laptop. 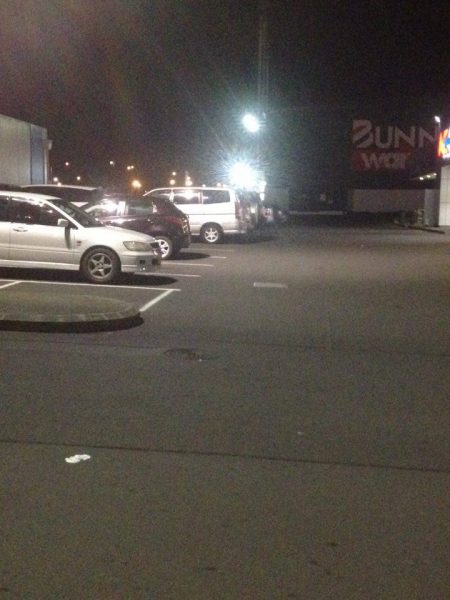 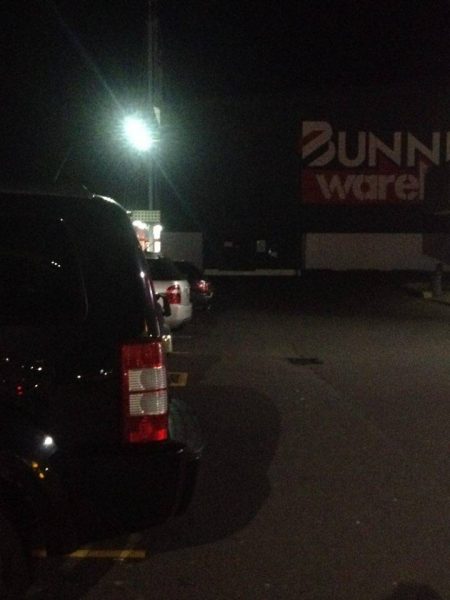 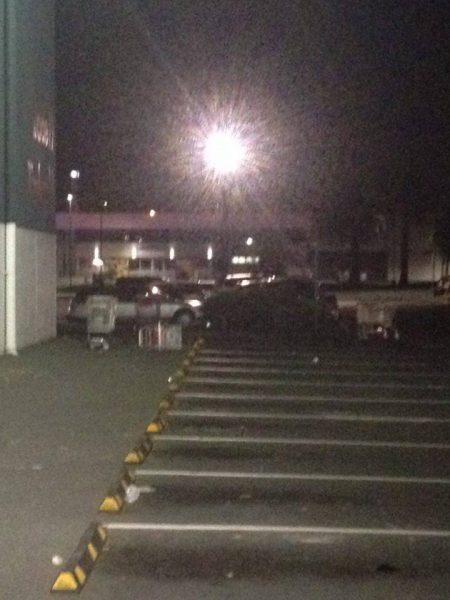 These people were winding down and settling in for the night.

As I made my way out West, East and eventually out South, the numbers of people increased and the sense of community and ease about the location was more apparent. 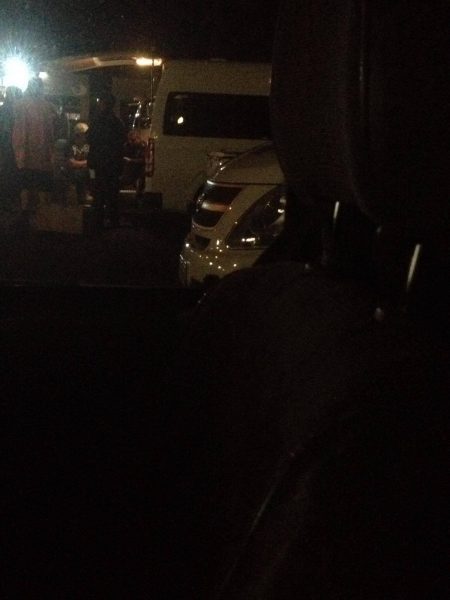 People were visiting other vehicles or chatting outside and even three people cooking on butane burners with the van door open. Not quite a Bunnings carparks sausage sizzle (you cant walk past without smelling and wanting, if your a carnivor like me) but it fit the Bunnings vibe all the same. 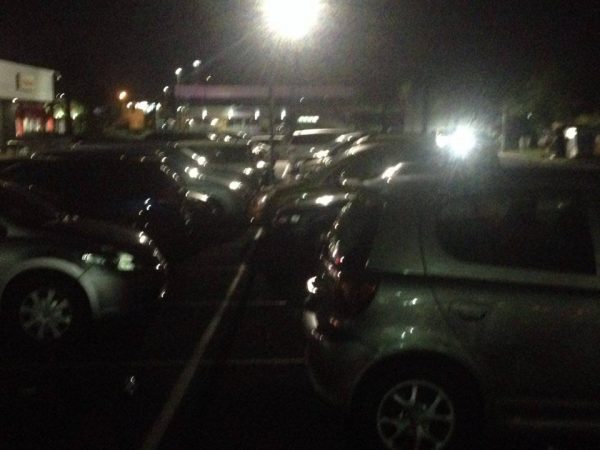 The smell certainly got the attention of a few dogs that like their owners were camped out in the car overnight. I saw a few wet noses sniffing at the crack in the top of the window and thought how quiet they had been for me not to have noticed, they weren’t there barking or whinning.

After my mostly sleepless night people watching from the tinted windows of the cab on my ute, I slurped back some cold coffee and focused now on the morning routine of these vehicle dwellers. 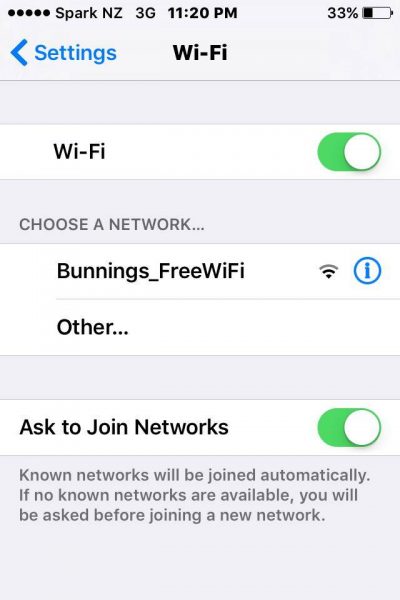 I say morning, but it was 5am and in my world that’s still bloody night time! People were getting cleaned up, dressing, eating cereal packing up bedding and heading off to their jobs, study or other daily activities.

So it’s official, Bunnings is the closest thing we have to Wallmart city, no other large organisation had even allowed let alone encouraged me to sleep in their carparks to be safe when I rang around the main centers of New Zealand. Bunnings however offered me free lodgings and even free wifi in both North and South Island stores and specific information on Bunnings carark camping logistics from North of auckland to South of the Bay of Plenty.

I contacted Bunnings head office to try and find out if this was a policy and why they might be so neighbourly to a mostly moved along community.

In true Bunnings style my request was delt with swiftly by their management and media enquirement team and I received a reply to my email the following day. unfortunatly they would only comment on the Whakatane store as this carpark is the only one advertised online as offering shelter for vehicle dwellers having done so with no problems for 11 years as told to me by bunnings Whakatane staff.
Bunnings sent me this statement…….

“Whilst Bunnings doesn’t encourage people to camp in our carparks, we are aware that over the years a small number of people have parked in our Bunnings Warehouse Whakatane carpark, outside of trading hours. We will continue to work closely with and be guided by the local council.”

Since my investigation, Bunnings took down yesterday their advertising of free camping at Whakatane but they haven’t been able to take it off the RV sites… 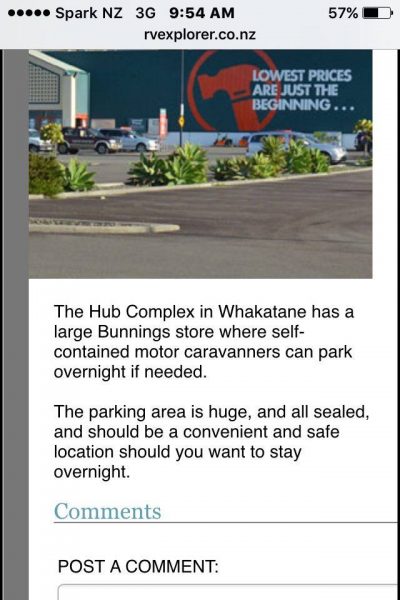 So really two things from this blog, firstly good on you Bunnings for being neighbourly and letting people doss down for the night (despite this not being policy) and secondly, and more importantly, why the bloody hell is New Zealand getting so unaffordable that an Australian companys carpark is the best help available to a growing number of our people?

Besides replacing our government with Bunnings employees what can we do about it?

Ruby Joy is a sex worker activist and writer