This is the great grumpy man of NZ Blogging, Lynn Prentice over at The Standard mauling someone who has disagreed with him about Poto Williams.

Here’s the comment, and you decide how appropriate Lynn’s reposes is…

[lprent: You really are a bit of a silly fuckwit. She didn’t “complain to the media”. She put it on her Facebook page. Banned for 2 weeks for lying and general inaccuracy. Please lift your game. Being a STUPID troll is unacceptable. ]
Immmm well actually Lynn no, she hired a PR company to write and seed it with the media.

How come the Standard can dredge up a 12 year interview with Willie Jackson, but can’t notice a story breaking just 2 hours ago that Poto Williams hired a PR team to write the attack on Willie Jackson and that they seeded it with media before hand.

This unbelievable division is why Labour can’t win elections. 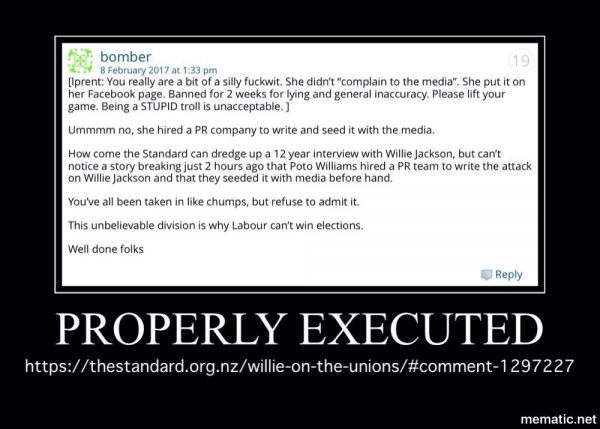 PS – If we here at TDB think your comment is stupid, needlessly offensive or defamatory we just don’t publish it, no one gets banned, and in light of the news that Poto didn’t just innocently post up a Facebook comment and in fact hired a PR company to do it and seed it with the media, shouldn’t poor old Ross be allowed back on?

Why Ross would choose to do that is another question.