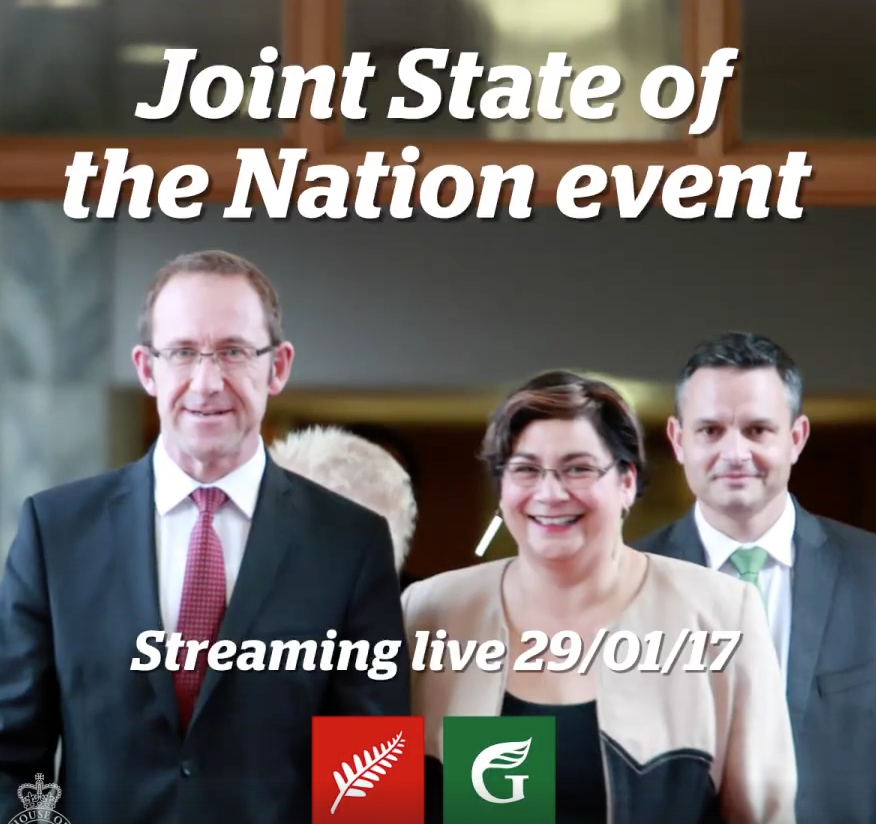 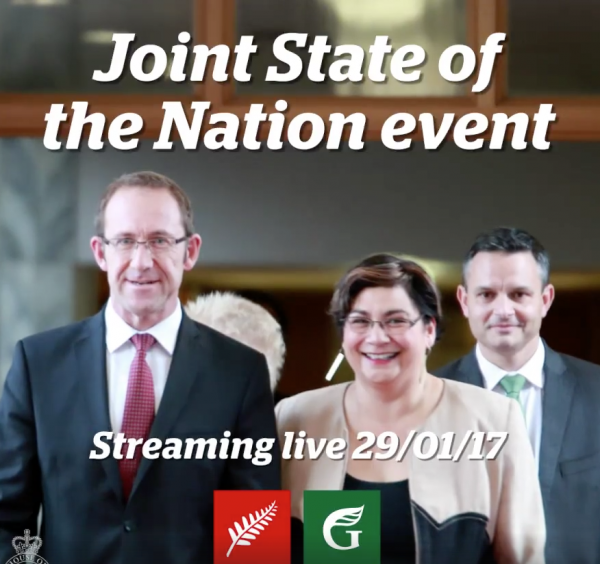 It was a smart move to hold a joint State of the Nation. It builds on the symbolism of the Memorandum of Understanding and creates the perception that there is unity and that the Greens and Labour are a Government in waiting.

Pity that the 4 week Mt Albert by-election will erode the symbolism of this State of the Nation, and that’s going to be the real test of this joint statement.

Will the Greens and Labour still look like a Government in waiting come the end of February?

With National and Gareth Morgan yet to show their hand, it’s one hell of gamble that the by-election won’t create huge friction between Greens and Labour, and the Greens are going to have to wear that if it happens. 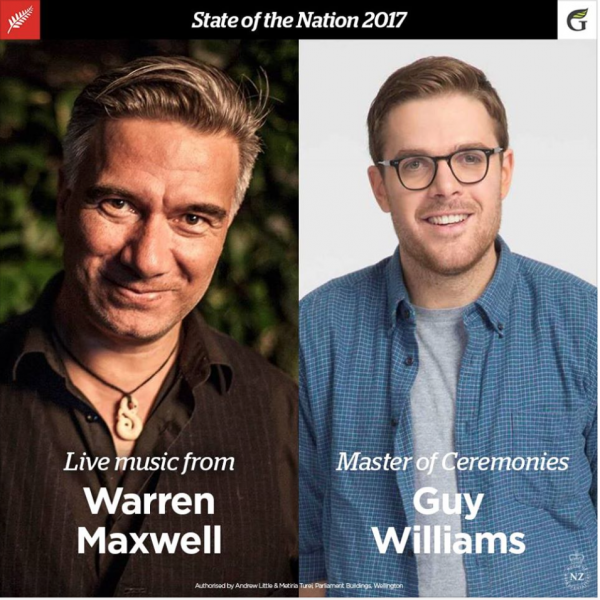 Place is packed, Spark is still down so the livestream numbers will take a hit.

Chloe Swarbrick on the stage which is good to see. Have no idea who the rest of the people on the stage are. They all look like they catch buses. Or cycle.

Labour and Green activists are on their best behaviour smile and hand people signs.

One wag comments to me that it has all the managed tension of a Hillary Clinton campaign speech.

Labour’s ‘numbers man’ Rob Salmond is hiding behind a curtain, which is where he should always hide.

The Livestream is awful. Very clunky.

Livestream is so awful, only die hard political geeks will be watching this, numbers viewing online on the Labour Party and Green Facebook page don’t get above  250 on Labour and 380 on the Greens .

Metiria makes a big issue of fierce women, ends up sounding like Hillary Clinton. Says some nice things about Helen Kelly though, so that’s nice.

Makes the point that workers should be able to come home without being dead.

Jeanette Fitzsimons makes a surprise mention in Met’s speech, (she was chained to a gate with a bunch of other Grandmothers last week protesting Dairy’s love of coal).

Met talks about Green Party values. It’s all a well worn path without any surprises or new details.

A surprising wasted opportunity, Met’s a much better public speaker than this. It’s good that the Greens have gone on and on about feelings though because their largest voting bloc – millennials – are all about the feels.

No new policy announced, but lots of love for women. It’s almost as if there are no men in the Green Party worldview. Dr Invisible James Shaw doesn’t say anything.

Andrew is up next. Can we call him ‘Butch’ now he doesn’t wear his glasses?

I think he’s been reading too much Simon Wilson over on The Spin Blog.

Makes the point that he’s worked hard for workers all his life.

Talks about his prostate cancer, says, “‘My battle with cancer colours everything I see, even today” – allows him to stand up for Cancer patients and makes health an issue to debate.

Cleverly allows Andrew toward the ‘that’s not right’ style of politics. No real ideology as such, just the general sense of unfairness.

Argues that his kids won’t ever own their own home, so he wants to make sure they do.

Is strongest who he makes a case against Trump, sounds like a statesman when he denounces Trump.

Has a good go at Bill English’s decision not to go to Waitangi.

Makes some fair points but it’s nothing we haven’t heard before.

Amazingly no new policy mentioned at all. It’s all come off like a group hug session in a safe space. It’s hard to even know why they did the Joint State of the Nationa as there is bugger all in this.

I don’t think anyone who voted National in 2014 would change their vote based on today and no one who didn’t vote will come out and vote because of this Joint State of the Nation.

It’s still early in the election year, so let’s hope they sharpen up before Bill English sets the date.

Two suggestions – get someone in who knows how to livestream as this was a joke and 2, get new speech writers both were pretty stale for States of the Nation.