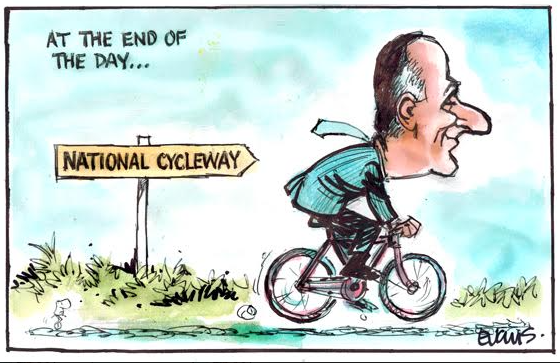 One puzzling question, for philosophy and everyday life is this. What is the relationship between essence and appearance? It could be one of manipulation and deception; how the social world appears may obscure an underlying reality. Some individuals may present themselves in disguise to hide their true character. Yet, how things appear cannot be disconnected from essence. If our political culture is pervaded by lies and propaganda then that is the essential truth of the situation. If someone is a master of deception then that forms part of their essence. Alternatively, it might be claimed,in a given situation, that appearances are not deceiving at all.

What you see is an essential component of what you get.

These different views of the essence/appearance relationship will inform my evaluation of John Key as a New Zealand Prime Minister. Adam Dudding in a recent Sunday Star Times feature recalled Key`s 2008 visit to McGehan Close in Owairaka , Auckland. He had labelled the street`s residents as a crime-ridden underclass, neglected by Helen Clark`s uncaring government. A few days later the new Prime Minister took a local Maori girl, Aroha Ireland up to the Waitangi Day celebrations. Dudding`s discussion with McGehan Close residents did not evoke fond memories. One described the earlier events as `a load of publicity bullshit`. Another opined that `I guess he can see there are homeless people ,but he’s not helping them`(`Key moments` Sunday star times December 11 A8-9).

For John Key such criticisms were less important than the appearance of concern and good heartedness. This indeed was a hallmark of his Prime Ministership. Fran O`Sullivan refers to `the permanent campaign which Key mounted- at what sometimes must have been an exhausting personal cost,fronting events and meetings around the country as well as fulfilling his beehive duties`. (`Strong economy a major bonus for brand Bill` NZ Herald December 10 pC2 ).

This permanent campaign was a seamless combination : targeted polling , focus group tracking, fawning media coverage , Key`s televisual presence and his genuine affability. He performed as an everyman for every occasion and location; the beach, the barbecue, the rugby  gay and lesbian pride events. The whole operation was unbeatable, three terms comfortably won. Yet, this permanent campaign of appearances sometimes revealed its vacuity in retrospect.

Thus, the Pike River funeral now looks like a staged event which serves to highlight government inaction over management culpability for the disaster. And, John Key`s local, everyman persona was not extended to the bereaved families. Their request for even a limited mine re-entry fell on deaf ears.

The suddenness of Key`s departure from office also raises doubts about his authenticity. Only yesterday, it seems, he was at one with Kaikoura locals after the earthquake. Flying in by helicopter with Gerry Brownlee, Key spoke freely on the enormity of the slips, the likely financial effects on farmers , fishermen, tourist operators and publicly declared his commitment to rebuild infrastuctures. Now…in a puff of smoke he`s gone, not there for the long haul. Meanwhile, clearing the slips has been frustratingly slow and conflicts between the New Zealand Transport Agency and Hurunui local authorities over road access has angered local communities.

If the appearances of a leader are taken on trust by influential commentators and the general populace, then mythology will prevail. History will be fabricated rather than examined. The three widely propagated myths about John Key are; that he was not really ideological, he occupied the political centre and that he left no legacy.

The first two myths can be found in a recent Listener editorial (December 17-23 p3) . John Key is said to be `the most pragmatic, least ideological leader we`ve ever had`. On economic matters his record suggests otherwise.

Key was committed to neoliberal doctrine. In the 2010 budget he reduced the top personal tax rate from 38 to 33 per cent, a gift to the wealthy and upper middle class. The raising of GST from 12.5 to 15 per cent in October of that year disproportionately affected lower income earners. Key actively promoted the privatisation or part privatisation of Meridian Energy, Mighty River Power and Genesis despite clear public opposition (in the 2013 asset sales referendum). The Prime Minister`s enthusiastic endorsement of the TPPA reflects the neoliberal eschewal of economic and national sovereignty arguments. Transnational corporate interests were advanced at the expense of the public interest. The sale of Housing New Zealand stock under Key`s Prime ministership reveals the neoliberal aversion to tax funded public provision.

Key did not declare his ideological convictions in the manner of, say, Roger Douglas, Richard Prebble, Don Brash or Ruth Richardson but that was because he didn`t need to. The neoliberal offensive of the late 1980s and 1990s was completed. Openly revisiting the political controversies of that era was tactically unnecessary. Key`s approach was to give the appearance of social concern, make piecemeal concessions to poorer families and to further advance neoliberalism, this time by stealth.

In this context the refusal to raise the age of superannuation entitlement was a very shrewd move. Keep soft National voters on board while appearing pragmatic and non-ideological. The Listener editorial also claimed that John Key `positioned National in the political centre`. This is a fallacy. Rather, Key performed a sleight of hand whereby his eschewal of moral conservatism and `iwi-Kiwi` racial prejudice obscured the fact that the whole party-political spectrum had shifted rightward on economic matters. John Key normalised this process by not drawing attention to it.

History was for others to fight over.

Mainstream New Zealanders just got on with life.

The third myth can be found in an article by Audrey Young (`No vision and no legacy,yet history will be kind to Key` NZ Herald December 10 A20). From this headline the former claim can be substantiated but not the latter. For Young, `a legacy is an achievement that will endure beyond the next leader and beyond different governments`. Well, if this is the threshold then John Key has bequeathed several legacies, none beneficial to the country. The first of these is neglect of infrastructure and social institutions. Our rivers and waterways have become more polluted and acquafers depleted as intensive dairying proceeds apace. Certain regions have experienced ,or will experience, a drinking water crisis; after Havelock North it will be Canterbury`s turn. The growing number of immigrants moving into Auckland are stressing transport infrastructures , stretching education resources and driving down wages and salaries and worsening homelessness.

The government has not caused these outcomes but it has no demographic plan for sustaining economic development.

The student visa scheme nationwide is a backdoor racket designed to entice and fleece new migrants. In our highschools NCEA is not delivering and the decile system of funding is well past its use by date. State prisons are bursting at the seams as private prison authorities turn a blind eye to open thuggery among inmates. Junior doctors work punishing shifts as non- urgent surgery becomes a near impossibility in public hospitals.

Although John Key is not personally responsible for these problems he never signalled their importance in a joined up way. No strategies were devised, no commissions of inquiry were set up no experts were deputed to examine the malaise. Just piecemeal responses and general neglect all round.

The second legacy will be polarisation of wealth and income.

Once again I`m not attaching all the blame to John Key it’s just that he refused to recognise the manifestations of this tendency.

The problem here is not simply housing supply, for three terms of National government a steadily inflating property price bubble has priced thousands of new Zealanders out of decent housing. There has been no attempt to adress the situation, even in a small way ,say, by removing tax deductibility incentives for property speculators. Such inaction belies John Key`s everyman image.

John Key`s third legacy is , and will be, the weakening of our democratic system. I have discussed this point before but it bears repeating.(see `A critical deconstruction of John Key- whats behind the façade` Daily Blog July 28, 2014). For a neoliberal politician John Key`s advancement of executive state power at the expense of democratic processes has been remarkable. The 2010 dismissal of Environment Canterbury`s 14 elected councillors, the usurpation of Christchurch city council authority after the September 2010 and February 2011 earthquakes, the 2010 rewriting of New Zealand employment laws at the behest of Warner Brothers, the 2013 collusion between the government and Sky City over the building of a convention centre,the introduction of the draconian GCSB Bill and the Telecommunications Interception Bill- all of these initiatives will be hard to roll back.

From the preceding analysis my verdict on John Key is as follows. Tactically, he was the master of appearances who deflected attention from an ideological commitment to neoliberalism and wealth defence. Strategically, there was no specifiable vision for the country beyond a failed flag branding exercise. These were the essences of John Key`s Prime Ministership.