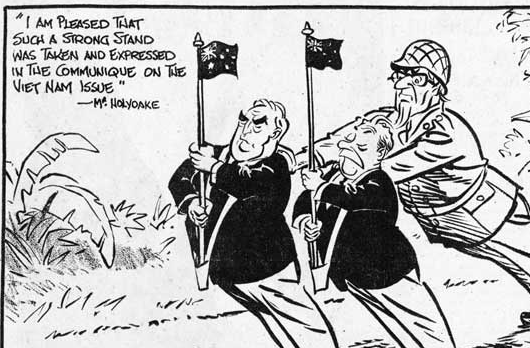 In his recent statement to Parliament, Dear Leader Key made this commitment to the people of New Zealand when announcing that troops would be sent to Iraq;

“The deployment will be reviewed after nine months and will be for a maximum two-year period.”

The question that should be in everyone’s mind is; why should we believe a politician who has repeatedly told lies; gone back on his word; or mis-represented previous situations?

It was only last year, before the September election, that he poo-pooed any suggestion of sending anything but humanitarian aid to Iraq;

But Key said he did not believe it likely New Zealand special forces would be deployed or requested.

“We’re just so far away from probably ever having to make that call.

“But in the end in so much as with any global issue, as things play out New Zealand would always look to the [United Nations] Security Council for its view and its sanction of anything that may happen.

“So you can never say never in a world where the Security Council decides that Iraq needs support of some sort – engineers or whatever it might be. That could always be considered but I think that’s very unlikely.”

Asked if that meant he could rule out New Zealand special forces soldiers being deployed to Iraq, even in an advisory capacity, Key responded; “I would say yes’.

He said the Ministry of Foreign Affairs was working on a proposal for aid and “I don’t think our involvement in Iraq [will be] any greater than that.”

Eight months later – Key is standing in Parliament explaining why NZ troops are being sent to Iraq. Not humanitarian aid, as he promised in June last year.

This is the same man who;

So why should New Zealanders believe any utterances from John Key about limiting New Zealand military involvement in Iraq – when less than a year  ago he had categorically stated there would be no such involvement in the first place?

2. Expect the SAS (or other NZ military forces) to be increasingly involved in military operations in Iraq – known as “mission creep”.

We have no reason to trust him.

NZ Herald: ‘Sending our forces to Iraq is not an easy decision’ – John Key’s full speech

The Mendacities of Mr Key #9: The Sky’s the limit with taxpayer subsidies!