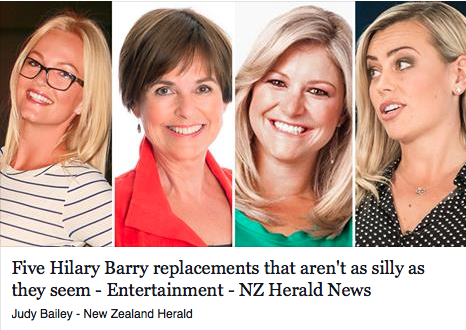 Is the Entertainment section of the NZ Herald locked in some sort of time warp? Apparently there is simply no way a non-white person could even be contemplated to replace Hilary Barry…

Hilary Barry has just four weeks left before she leaves TV3. Who will step in to fill her mighty shoes over her dual roles? Here are five suggestions that might just work.

…so mostly they have to be white, blonde or young. Oh and a contestant on the Batchelor.

That a contestant from the Batchelor would even be considered shows how far we’ve come as a civilisation. Perhaps they could give roses for journalists they really like?

As for turning TV4 into a reality TV station aimed at women, wouldn’t actual reality TV aimed at women have shows where women get paid less, are sexually harassed & treated like second class citizens?