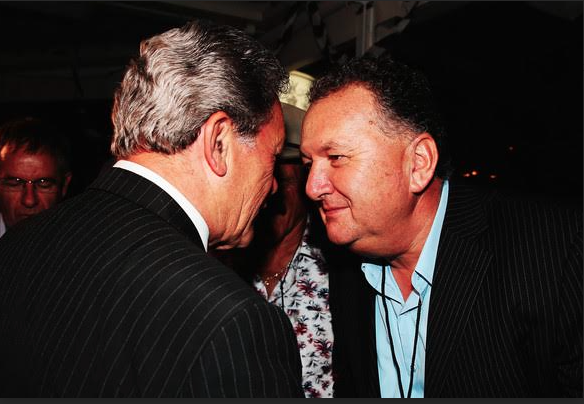 Two years after he quit Parliament to become New Zealand’s “Ambassador for Pacific Economic Development”, Shane Jones is rumoured to be plotting a comeback. This time, as the Member for Whangarei. TDB readers may recall our post in June last year ‘Life After Winston – On The Future Leadership of NZ First’. In it, we cast some light on Shane Jones’ relationship with Winston Peters and NZ First. Now we reveal new information about the back-room political manoeuvring that is going on in Whangarei.

Newshub’s Lloyd Burr broke the Whangarei story on 10 March. The timing could not have been better. Prime Minister John Key and Winston Peters were in town to mark the start of work on the Hundertwasser Art Centre. He ambushed both. Could National lose Whangarei to Shane Jones? “That’s not likely to happen in my view,” Key said tersely. Peters was less direct, though visibly more relaxed: “I’m not able to talk to anybody in the diplomatic core on a political matter.”

Of course the man himself would not comment. So who, or what, is behind the sudden media interest about a Jones candidacy? To the best of our knowledge, Shane Jones is not and has never been a member of New Zealand First. It makes sense, then, that Jones’ biggest supporters are outside of the party.

TDB can reveal that the push for Jones to stand in Whangarei is linked to the “Grow Northland Rail” campaign and members of the Rail and Maritime Transport Union. The alliance between rail interests and NZ First goes back to 2012 and former NZ First MP Brendan Horan, who established a close working relationship with a Whangarei-based RMTU organiser during his campaign to highlight rail safety and advocate for key infrastructural improvements and line reopenings. The same organiser is behind an informal campaign to ‘draft’ Shane Jones and unseat National MP Dr. Shane Reti. Said organizer also sent us the below-reproduced image in the hopes that we’d be able to help the cause by sharing it far and wide. 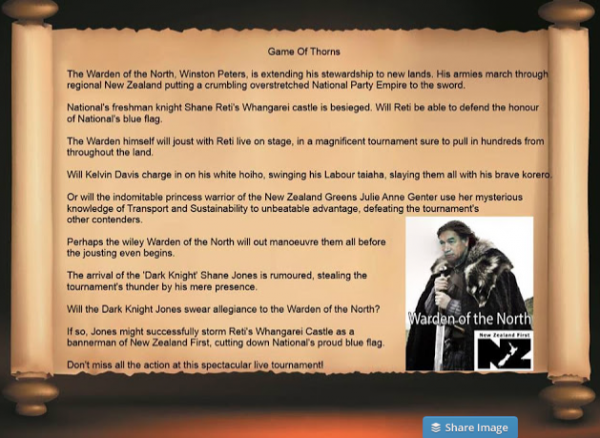 We understand he has even approached figures in NZ First, Labour and the Greens to discuss the possibility of an electoral pact that would give Jones a clear run. This would theoretically involve both Labour and the Greens standing aside in Whangarei with the goal of affording as many of their combined total of ten thousand votes to Jones as possible.

Winston Peters’ ethical opposition to such backroom deals makes it unlikely, however. It nevertheless demonstrates that Jones has an identifiable support base independent of the Party and that his potential candidacy in Whangarei should be taken seriously. But let’s remember that as well as being a friend to the unions, Jones is also a friend to the National Party.

Last year, we received information that a senior National Party operative was openly discussing the implications of a Shane Jones-led NZ First. Jones, they reasoned, would be easier to control than Winston – or Ron Mark, for that matter. He had, after all, already demonstrated a capacious willingness to cripple Labour by abandoning his old party in the run-up to the 2014 Election in exchange for a bespoke-fit personally created sinecure position gifted to him by the National Party. NZ First would therefore potentially be transformed almost overnight into an obsequious Nat coalition partner a la ACT or United Future – devoid of principle, and concerned only with having a “seat at the table” in much the same way as the Maori Party.

In other words, some in National have already made the tangible calculation that those self-same mercenary proclivities they took advantage of with regard to Jones two years ago are still in evidence today – meaning that he could well be bought off (again). Worse, if National – or factions thereof – were to assist Jones in his rise to power in either the Whangarei constituency or New Zealand First’s internal politics, they might well consider Jones to be already ‘bought and paid for’ by the time the presumptive 2020 coalition/confidence & supply negotiations rolled around.

However, if Jones is serious about his leadership aspirations (rather than merely returning from the Pacific as an electorate or list MP in perpetuity), then there is one other crucial group whose opinion must be considered: the NZ First Parliamentary Caucus he’d presumably be climbing over the backs of in pursuit of first the Deputy Leadership, before eventually going for the top job. Despite the potency of a potential Winston endorsement, Jones would still need to command the support of at least a bare majority of his presumptive Parliamentary colleagues if an internal election for the Deputy Leadership and/or Leadership were to be held.

In this, Jones would face something of an uphill fight. Many in NZ First’s Caucus are strongly loyal to current Deputy Leader Ron Mark – as was seen during the ouster of former Deputy Leader Tracey Martin in June of last year.

This makes Martin a potent potential ally for Jones. She has at least one or two supporters left in Caucus who would presumably vote with her if she so requested, as well as other assets to draw upon within the Party and its governing infrastructure more broadly that could be helpful with bringing Jones ‘inside the tent’. She would also have several things to gain from helping Jones, including a potential shot at something she’d have difficulty doing herself – deposing and heading off the leadership ambitions of the man whom she feels “usurped” her Deputy Leadership position; while also affording her a shot at being given back her ‘old job’ as Deputy once Jones took the Leadership.

This logic is sufficiently self-evident that we are given to understand at least one of the camps previously named in this piece has already extended feelers to Martin with a view towards sounding out her potential support for such a maneuver.

As well as Martin, there is another senior party figure in Wellington whom we believe is supportive of Jones. In our June post we reported that Director of Operations Api Dawson had approached Jones about the possibility of defecting to NZ First as early as 2012. Dawson has previously been close to Ron Mark, but is also a pragmatist who has his eye on government.

So, all things considered -while the RMTU’s efforts at liasing with New Zealand First in order to get Northland rail back on track are to be commended … we would warn our comrades up north to think very carefully about what wagons are potentially hitched to that particular engine of change.