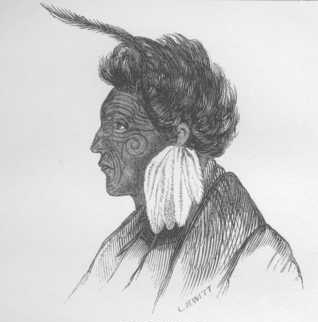 Two books that I read last month were Ray Grover’s magnificent historical narrative, Cork of War (1982), and Margaret McClure’s A Civilised Community (1998). Then I came to realise that the central characters in each book represent, for me at least, the ‘most important’ New Zealanders of the nineteenth and twentieth centuries; namely Ngāti Toa chief, Te Rangihaeata, and our most-loved Australian immigrant, Michael Joseph Savage.

I’ll save my comments about Savage until next time, while noting why Rangihaeata is important to both me and to New Zealand, and indeed noting that this is the week of our Waitangi Day holiday.

Cork of War is a compelling historical narrative – essentially an historically accurate drama of Shakespearian scope and scale, part comedy, part tragedy. ‘Narrated’ in 1861 by John Nicoll, a Scottish-born Kapiti whaler, Paekakariki publican and Waikanae store-keeper who married into Ngāti Toa. His wife was Kahe Te Rau-o-te-rangi (see her biography in Te Ara and The Story of a Woman’s Wonderful Swim in Papers Past). Kahe was one of five woman signatories to the Treaty of Waitangi, and a cousin of Rangihaeata.

The story covers the rise and fall of Ngāti Toa’s 20-year empire, defined geographically by Cook Straight and the South Taranaki Bight, and centred on Kapiti Island and, latterly, Porirua. (I will not discuss here the economic context of empire within Aotearoa, only noting that horticulture [potatoes] and trade made possible by outside contact created economic opportunities hitherto unavailable.)

The story of Rangihaeata is important to me, in part, because these lands associated with him also happen to be my turangawaewae. My maternal grandmother was raised in Te Awahou (Foxton). My paternal grandfather was raised in Apiti. I was born in Otaki, raised in Taitoko (Levin) and Papaeoia (Palmerston North). My summer holidays were spent at Paekakariki, with trips to Te Whanganui-a-Tara (Wellington) through Mana (Porirua), and to Te Uruhi (Paraparaumu). These lands will forever retain the wairua of Rangihaeata (especially), and his kin (Rangi Topeora, sister), Te Rauparaha (uncle), and Waitohi (mother, sister of Rauparaha). It is Kapiti Island, more than anywhere else, which represents Ngāti Toa, and its brief hegemony over central Aotearoa. My great uncle George stayed there, in the 1930s, as caretaker of this island that became a sanctuary.

For New Zealand, and reflecting on the events at Waitangi in early February 1840, the ‘elephant in the tent’ was the New Zealand Company settlement at Wellington, which pre-empted Governor Hobson’s hui at Waitangi. Ngāti Toa, the lords of the Strait, had to negotiate separately with the Company and with the Crown, and to appreciate the difference. They knew what fate had already befallen the aborigines in New South Wales, and they knew that the settlers were different from the whalers and traders who they had profited from. Though the Bay of Islands negotiations were fractious – and important – it was the Wellington outcome that would set the precedent for organised settlement of these lands.

Rangihaeata was fair but intimidating, as warlord, and as landlord to Ngāti Toa’s subject iwi. Rauparaha did more of the talking, but not always to common purpose. Since the 1839 death of Waitohi it was Rangihaeata’s mana that underpinned his tribe’s authority. While Mokau (a name for Rangihaeata used by his kin) understood that the coming of the New Zealand Company (and those to follow) would bring permanent change to Aotearoa, he fought hard to maintain the partnership principles of the Treaty, which he signed (along with his sister [the equally formidable Topeora], his uncle Te Rauparaha, and his cousin Kahe), realising (correctly, at least for a decade and a half) that the government men would consistently show better faith than the untrustworthy men of the Wakefields’ Company.

Unlike many of his compatriots, Rangihaeata looked for the big picture, the long-term forces at play, and acted with all his ability to protect Māori communities and culture, and to ensure that the future partnership would be as equal and respectful as possible. It was through Ngāti Toa’s struggle – and Rangihaeata’s struggle in particular – that the Kīngitanga movement was conceived.

Rangihaeata was a master carver, and a superb military engineer. Unlike most other Māori in close contact with Europeans, he never became a Christian, but was accepting of those who did convert. And he never wore European clothing.

For his pains, Rangihaeata became the most feared man in Wellington. He was even more maligned by the settlers at Nelson who in 1843 unsuccessfully tried to appropriate Ngāti Toa land in the Wairau valley. Following two later incidents in Heretaunga (Hutt valley) – involving both settlers and soldiers – that Wellington settlers assumed were (but almost certainly were not) masterminded by him, Rangihaeata became a fugitive, with the prospect of an undignified end on a Lambton Quay gallows.

Rangihaeata and those ‘rebels’ loyal to him escaped from his Matataua Pā at Pauatahanui, essentially tracing what soon after became the Paekakariki Hill Road. The one major skirmish with Governor Grey’s troops took place at what is now Battle Hill Regional Park. With much help, Rangihaeata escaped to Poroutawhao on the northern outskirts of Levin, where he built his fortress, Purutaua Pā, the ‘Cork [or Plug] of War’. After the escape, however, one man (Whareaitu, ‘Martin Luther’) alleged to have been a follower of Rangihaeata, was summarily court martialled and hanged at Porirua. Settlers’ utu.

When the heat had died down, Governor George Grey ended the pursuit, accepting Rangihaeata’s mana, allowing him free reign on his territory (at least between the rivers Waikanae and Rangitikei) and even became a friend of sorts.

The story of the Wellington and Manawatu regions developed with minimal further conflict. The Wellington colonisation set the stage for both subsequent British settlement and for Māori unity through the Kīngitanga movement (which gathered pace in the 1850s). The New Zealand Wars in the 1860s, which began when some Te Ati Awa (especially Te Rangitake, Wiremu Kingi) – who had been subjects of Ngāti Toa, and had sold Wellington land too readily – mounted their own resistance back in their Taranaki homelands. Sadly, the lessons of Treaty partnership had not been learned. Matters that could have been resolved peacefully with good faith on both sides were not resolved. Ever-more settlers would demand ever-more land.

Rangihaeata had drawn his line in the sand, and had shown a way forward; a way of sharing that could be positive for settlers and for Māori. A man of his time, of the first half of his century, he clearly foresaw the changing times and accepted those changes, while negotiating hard for his people. Himself, he would not be – and did not wish to be – a part of those changes.

While an aristocrat – not a democrat – his style of leadership differed markedly from his better known and more loquacious uncle, Te Rauparaha.

From The Cork of War, p.165:
“The surveyor noticed Rauparaha kept for himself all [the tobacco] he had been given while Rangihaeata divided his amongst his followers, keeping only a small portion for his own use. Any shore party man on the north side of the Strait could have told a similar tale of how each chief liked to share his goods.”

Te Rangihaeata, Ngāti Toa warrior chief, was committed to the principles of public equity. A portion of his wealth was public wealth – Ngāti Toa wealth – and would be apportioned as such, to his people, as of right.