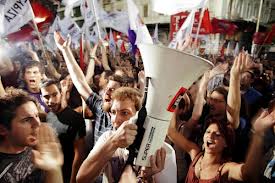 The electoral victory of Syriza is inspiring left and Green parties around the world.

There was already a lot in common ground between the Green and Syriza platforms – including opposition to privatization and corporate domination, drug law reform and anti-militarism.

When it was negotiating entry into Syriza, the Ecologist Greens presented 21 additional policy points, all of which were accepted by Syriza. They included independence from fossil fuels within 20 years, encouraging reafforestation, protection of fisheries, participatory processes in public services, and decentralisation.

Greens around the world, including in New Zealand, have welcomed the Syriza government.

The British Greens have been particularly enthusiastic, given the impact the Syriza victory is having on European politics. Green MP Caroline Lucas tweeted “hope has won” and two British Green members of the European Parliament, Molly Scott Cato and Keith Taylor, said that the “Greens share the view of the new government that austerity is a failed model which has piled misery on the poorest while making the wealthiest even richer.”

The Greens’ opposition to austerity policies of the other British parties has given its membership (and poll rating) a big boost. The Green Party of England and Wales (excluding the independent Green Parties in Scotland and Northern Ireland) now has 46,000 members, more than either the Liberal Democrats or UKIP, and a poll rating of between 9% and 11%.

The growing popularity of the sensible policies of the Green Parties and broad Left formations like Syriza is making it harder for the conservative media to paint them as “extremists”, “cranks”, “far left” or “hard left”. As the Greek elections showed it is the older, more conservative parties, that are not meeting the challenges of today, and are being marginalised. In this year’s Greek elections, the main social democratic party, Pasok, which won a majority of the seats as recently as 2009, took only 4.7% of the vote.