Despite all the filth. Despite all the manipulations. Despite the allegations of bribing an MP to stand down, hacking into Labour’s computer and downloading their database, Secret Intelligence Service briefings, rigging candidate selections, trawling brothels for dirt on journalists and undermining the head of the SFO – DESPITE all that, the right wing mainstream media of NZ are still using Slater as a source and pumping his smears.

This bullshit story on Fairfax media that there is some sort of rift within MANA and that Hone has gone missing is a perfect example of them using Slater’s post as a source. then again, this is the same right wing media organisation who thought doing stories on Key golfing was more important than Dirty Politics the day it broke.

I’ve spoken directly to MANA, Hone is NOT in hiding! Right now he is in Auckland, NOT bloody overseas, he was on Radio Live this morning, on the leaders debate tonight and on The Nation with Laila in the morning! To source Slater and then parrot his bullshit was acceptable practice before Dirty Politics. Journalists like Michael Fox caught doing it now should be shown all the contempt they deserve!

Like wise the attempt now to attack Matt McCarten which has also been seeded on Whaleoil with the claim Matt is also mates with Whaleoil. Despite his public claims, Slater has been threatening to release what he has on Matt – pfft – go ahead you clown, I’ve spoken directly to my sources, and there are no emails, just a handful of calls and a text message that was to do with Cameron’s slagging off of Unite! The absurdity of claiming Matt as a source is ridiculous yet that doesn’t stop the mainstream media trying to make a story out of nothing… 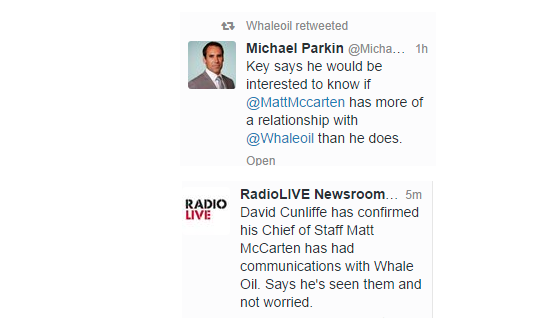 The ‘communication’ between them are banal nothings that amount to jack shit.

The emails that matter right now are the Slater-Ede emails, not these ones.

Slater is a far right hate speech monger who injects hate politics into the body politic. He has been outed as a hypocrite and sleaze merchant of the lowest kind. He manipulates, twists and misrepresents almost everything on his blog and one can never be sure exactly who has written it. He is a deceptive and damaged individual who is the problem, not the solution, that journalists are still using him as a source  is sickening.

As for the mainstream media polls telling us the county still loves National despite all the hate politics he has been caught out doping – I simply don’t believe NZers are this stupid or evil. Both these polls with their tiny samples and land line bias have been woeful in their over support of National and under support of Labour. These right wing media polls are not trying to reflect public opinion, they are trying to manipulate it. Right now, only 2 days in, there has almost been three times the number of early polling than this time last election…

…so to hell with the mainstream media. I’m not letting Fairfax media tell me who will be the leader of this country. These journalists are still using the same discredited players that have been outed by Dirty Politics when really those players should be shunned. Here’s one site demanding David Farrar be stood down from RNZs The Panel. After the disgustingly offensive sexism Jordan Williams  has expressed to Slater, he should be banned as well!

The issue isn’t Hone or Matt, the issue is the stinking corruption this Government is neck deep in! This malevolent and corrupt Party needs to be ended and ended now.

Get up nd vote these evil skunks out!