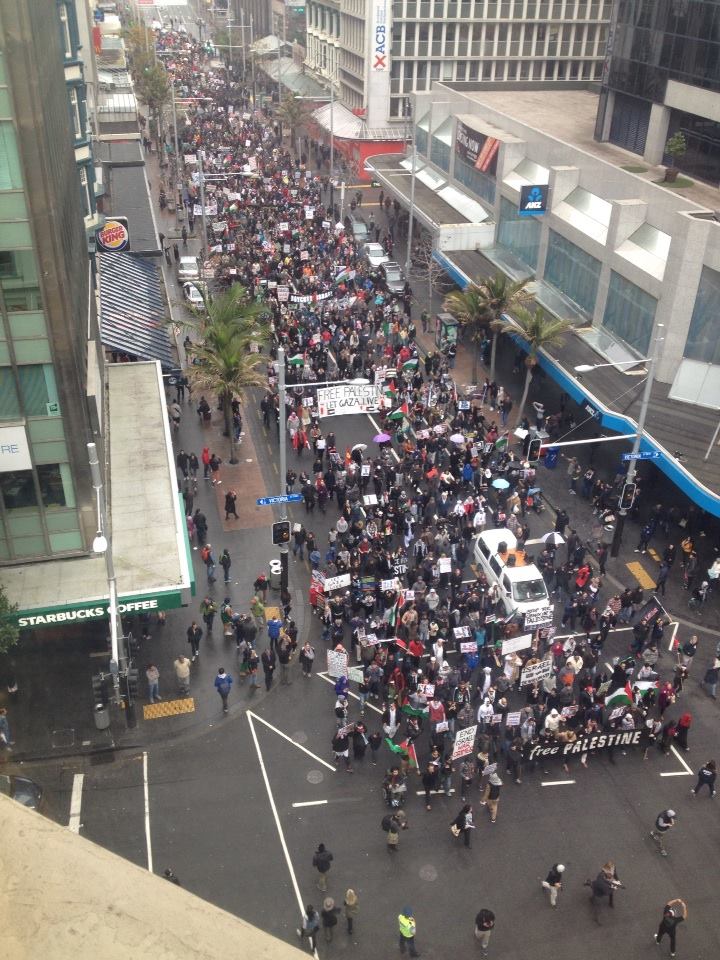 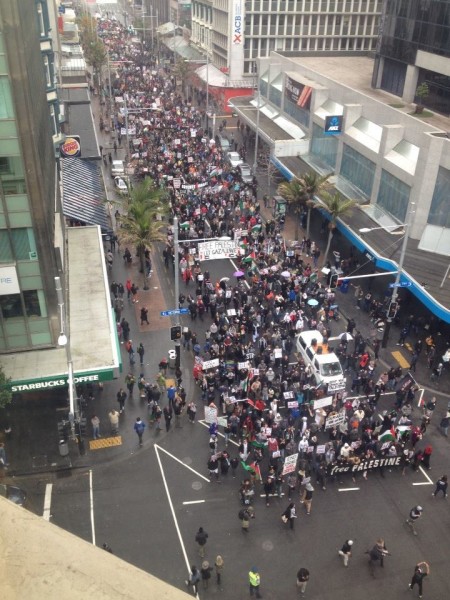 The NZ Herald claims this was ‘hundreds’ not thousands of protesters

It was marvellous to be part of the huge Queen Street Auckland march on Saturday in support of Palestinians in their struggle for justice and human rights.

The march was still leaving Aotea Square when the lead banners were at Victoria Street – a certain sign of a 5,000 plus strong march despite the piddling numbers in the news reports I saw.

It was the biggest march ever held in New Zealand in support of the Palestinian struggle.

Speakers condemned the New Zealand government’s openly one-sided policy of support for Israel while issuing muted criticism of its actions.

“We have an Israeli embassy in Wellington but no Palestinian representation and we put out the welcome mat to young Israelis with a visa-free arrangement for them to come here but nothing similar for Palestinians.

Speaker after speaker called for a strengthening of the campaign to boycott Israel and have made the call for a specific national campaign to force the closure of the Israeli embassy.

New Zealand did this with South Africa and we must do the same with this rogue, racist state of Israel.

Also released today to media is the text of a letter sent by Palestinian support groups to New Zealand’s major news media outlets. The letter speaks for itself:

To the News Editors of:

We are writing to all of you because there are well established patterns of reporting which seem to have been adopted by New Zealand media, and much of the overseas media which gives a biased and unbalanced view of the Middle East for the New Zealand public.

There are three main issues with respect to media reporting we are raising:

2.         The Israeli propaganda war taken up by mainstream media also includes referring to Palestinian deaths as people killed while Israeli deaths are the result of terrorism or murder.

3.         Israeli spokespeople are generally quoted directly in their own words while reporting of Palestinian views is almost always as an afterthought via third hand comment from unnamed spokespeople. We understand the difficulties for media in gaining interviews with Palestinian spokespeople given their targeting for assassination by Israel but there are many credible, well informed Palestinians living in New Zealand and elsewhere who can give accurate commentary for New Zealanders.

Broader reporting of the conflict has been so bad over many decades that a survey of public opinion in the UK a few years back showed the majority of people thought Palestinians were occupying Israeli rather than the reverse. The same could be the case in New Zealand.

On average one Palestinian youngster has been killed every 3 days for the past 13 years and yet you’d have no idea of this from the New Zealand media. One Israeli death and the hostile reaction from Israel which follows gets far greater coverage than hundreds of Palestinian deaths.

People here could also be forgiven for thinking the problem lies with rockets being fired into Israel from Gaza. This is perhaps the greatest falsehood because the problem all along has been Israel’s brutal military occupation of the West Bank; its medieval siege of Gaza; ongoing theft of Palestinian land; detention without trial of thousands of Palestinians and the refusal of Israel to allow the return of Palestinian refugees who were driven from their land and homes when Israel was formed.

We would appreciate if each of the media organisation to whom this letter is addressed could respond to us as soon as possible. Initially please respond to (email deleted)

Students for Justice in Palestine