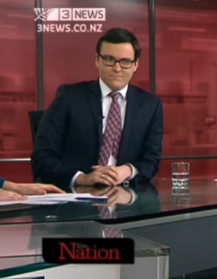 Every so often (quite regularly, in fact), a media personality will say something outrageously offensive, or just plain gormless, that results in an uncontrollable  *facepalm* reaction. On 19 July, on TV3’s “The Nation“, it was Brook Sabin’s turn.

Brook was one of three panellists on “The Nation“;

The discussion centered around coalitions and pre-election deal-making. Colin Craig from the Conservative Party and Jamie Whyte from near-defunct ACT Party, had just been interviewed by a very competant Lisa Owen (unlike the uber differential performance between a very chummy Patrick Gower and NZ First Leader, Winston Peters).

At  1.42 into the panel discussion , there was this extraordinary exchange between Sabin and Wilson;

Sabin: And if John Key says ‘no’ to Colin Craig, he can say why is Labour not saying ‘no’ to doing a deal with Kim Dotcom, and I think that’s quite powerful as well-“

Wilson: Actually, I think that’s, that’s unreasonable. Now, Labour hasn’t done a deal with Kim Dotcom. They are saying maybe they will do some kind of deal after the election, in the same way that National would do a deal with the Conservatives. But right now, Labour’s made it very clear they’re going to do their best to win Te Tai Tokerau. They’re going to do their best to win all the Maori seats. They’re not doing a deal to give Internet-Mana a seat. On the contrary they’re going to fight them. They may need to do a deal later, but it is very different from the Epsom-Ohariu scenario.

Sabin: …And I think he needs to try to close that door a little bit more…

Wilson: …Kelvin Davis has the party support to win that electorate and they’re going to do that.

Where has Brook Sabin been? Holidaying on Pluto?

The last few weeks have been rife with Labour MPs excoriating Mana-Internet. Simon Wilson  was 100% correct that  David Cunliffe has made it abundantly clear that Labour is not prepared to do Epsom-Ohario style deals – as the Labour leader pointedly made explicit on “The Nation“, just the previous week;

Patrick Gower: If Internet-Mana get there and you need their numbers will you use them to form a government or will you rule them out?

David Cunliffe: We’re not doing any pre-election deals with anybody.

[…]
Patrick Gower: But you would perform-

David Cunliffe: Paddy, with this team to win the election, campaigning for the Labour party vote.  After the election we will work with whoever we need to work with to change the Government…

Seems fairly clear to me.
Is it clear to you, the reader?

Evidently it was not clear to Brook Sabin.

Does Sabin not watch his own current affairs show?

The media appears full of political journalists and reporters who simply don’t seem to know what they are talking about and put a ‘spin’ on things that is misleading and damaging to the process of democratic debate. (Note the irony here; even whilst Cunliffe and Labour bend over backwards not to engage in any pre-election deal-making – the media will still portray them as doing precisely that! Labour might as well nut out a full-scale deal with the Greens and Mana-Internet, as media commentators have already convicted them on the charge. All the while, the same media commentators look on in awe at Key’s deft handling of deals with ACT, Peter Dunne, and possibly Colin Craig. My poor little Hypocrisy Meter, which goes *DING!*, has melted down from over-excitement at the double standards of mainstream media commentators.)

If the media cannot be trusted to report what a party leader has said, unequivocally, in black-and-white terms that a five year old can understand – then we are not well served for information.

Brook Sabin tried to ‘lump’ David Cunliffe with John Key when it came to pre-election deal-making. He failed because luckily Simon Wilson was onboard “The Nation’s” panel to correct Sabin’s patently untrue assertions.

Either Sabin was truly ignorant of Labour’s position, or he was indulging in sloppy, lazy “they’re-all-the-same” style of political commentary. If it is the latter, Sabin needs to find a new job.

Are they looking for bar-staff on Pluto?

The Daily Blog: Message to TV3 execs – Is this really acceptable?

Labour’s collapse in the polls – why?

The secret of National’s success – revealed