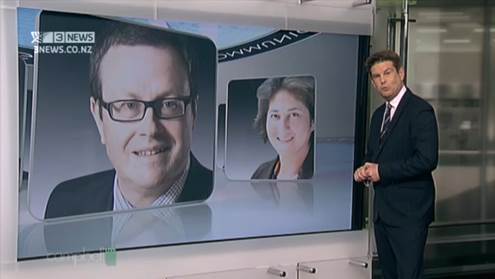 WHILE IT IS ENTIRELY FITTING that we should congratulate TV3 and Campbell Live for the show they broadcast last evening, it is important to also acknowledge that they have gone about as far as they can go. John Campbell and his colleagues are now in the same position as the makers of the 1990 TVNZ documentary, For The Public Good, and they face the same hard choices. The evidence they have assembled is indisputably verysuggestive, but it is not even remotely conclusive.

Back in 1990, the makers of For The Public Good went ahead and drew conclusions anyway – and it cost TVNZ a great deal of money and most of them their jobs. To avoid a similar fate, Campbell and his boss, TV3’s Head of News and Current Affairs, Mark Jennings, had no option but to do exactly what they did last night – end their investigation into John Key, Ian Fletcher and the GCSB inconclusively.

Short of their very own Edward Snowden stepping forward with video, audio and written evidence of every word spoken by the main protagonists, Campbell Live’s investigation can progress no further. Yes, there are many questions that cry out for answers, but those in a position to do so cannot be compelled to testify. And if TV3 attempts to put their “best guess” answers in the mouths of the “Intelligence Community” they will be sued – and they will lose.

That’s why so few in the mainstream news media are prepared to take on these sort of stories. Every aspect of “National Security” stories is so wrapped in secrecy, and that secrecy is so powerfully protected by the Law, that making any kind of headway is extremely difficult. Nicky Hager or Jon Stephenson, remarkably talented and tenacious free-lance investigative journalists, might beg, borrow and steal the resources and time to track down and marshal conclusive evidence, but TVNZ and TV3 – networks with many competing claims on their time and resources – are required to consider the commercial, legal, and, especially on stories like this one, the politicalcost of proceeding. It is a huge tribute to TV3’s journalistic values that it was willing to let Campbell run with a story like this for so long.

Having led us this far, and having painstakingly constructed the time-lines so essential to the process, Campbell Live is leaving the business of speculation to us.