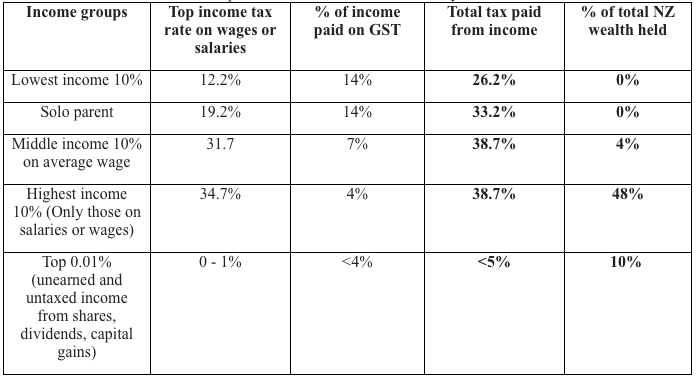 Before the budget disappears from the radar it’s worth considering the debate which has just begun on tax cuts and the inevitable misinformation the government will put out during the election campaign.

Last Saturday on The Nation TV3 reporter Lisa Owen and Finance Minister Bill English played tag on one of the government’s myths.

However even a back-of-an-envelope calculation shows this for the myth it is.

What the table shows is that low and middle income families and beneficiaries are paying a big proportion of their incomes in tax – in fact it’s an almost flat rate of tax from their incomes – while the real bludgers are in the top 10% of income earners. In fact the closer one gets to the top the less tax is paid.

Some reading this will claim that Working for Families and other benefits should be included in a table like this because they argue this reduces the amount of tax families on low incomes pay relative to others but this argument doesn’t hold water. Working for Families is a subsidy on low wages paid by employers and is therefore corporate welfare – not social welfare.

It’s disappointing to see journalists showing such a poor grasp of the basic issues around tax and allowing National to drive a wedge low and middle income families. This has always been an important tactic for the right wing to retain power but their mantra is rubbish. It is low and middle income families which shoulder the bulk of the tax burden while a tiny elite at the top are creaming it at our expense.

“…the rich list represents about 0.01% of households who own 5-10% of all household wealth. This is roughly equivalent to what the bottom 50% of the population own. Yet the bottom 50% are more likely to be paying tax on every dollar they earn while some of our richest individuals are ducking on paying tax.”

“According to information released to us last month by IRD, 50% of the wealthiest kiwis dodge their tax responsibilities.”

“In annual samples of 184 ‘high wealth individuals’ between 2009 and 2011, IRD found that only 49.5% of them reported personal incomes of more than $70,000 (the top tax bracket). This indicates that some of our wealthiest individuals are skirting on their tax contribution.”

Bill Rosenberg said this is a worldwide issue that needs addressing, and the tax changes of 2010 which lowered income tax rates for these wealthy individuals don’t appear to have made any inroads into it. “Governments worldwide lose more than $3.1 trillion in annual revenue because of tax evasion, according to a report published in November last year by the Tax Justice Network. Just a few days ago the same organisation released further research showing that between US$21 trillion and US$32 trillion had been hidden in secret tax havens by the global super-rich.”

Let’s have more honesty and critical thinking on this issue from politicians and journalists (I’m not holding my breath).