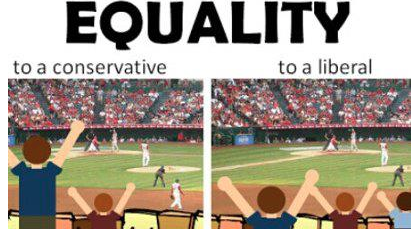 A very insightful piece by Dr Deborah Russell, lecturer in taxation at Massey University, and Labour candidate for Rangitikei, raised  a clear picture of the difference between equality and inequality;

There is little doubt that inequality has increased over the last thirty years. In  February this year, a bungle by Treasury resulted in  child poverty numbers being  underestimated by twenty thousand. Income inequality  was also underestimated.

Part of the reason has been one aspect of the neo-liberal “revolution”: tax cuts and increased user pays.

New Zealanders could do well to reflect that, since 1986, we have had no less than seven tax cuts;

At the same time we have had less revenue from SOEs as they were privatised or partially-sold off.

So it’s little wonder that more and more User Pays has crept into our economy/society, such as $357 million in “voluntary” donations for ‘free’ schooling, that parents have to cough up each year. That’s on top of school uniforms, text books, shoes, personal equipment, etc.

The neo-liberal revolution of the 1980s and 1990s didn’t stop, it just became more covert, with incremental increases, so we barely noticed. And when we did notice – such as the increase of prescriptions from $3 to $5 – public opposition was muted. Yet, once upon a time, prescriptions cost 50 cents each, and before that, were free.

An indicator of growing inequality is the level of home ownership in this country. This is a core statistic that cannot be fudged by National’s spin-doctors and their right-wing, One Percenter wannabes/sycophants.

By 2013, according to last year’s census, the figures had changed radically;

As the Census 2006 Housing in New Zealand report stated,

“Over the 2001 to 2006 period the incomes of the majority of private-renter households have for the first time since 1986 increased more quickly than owner-occupier households. This supports the contention that an increasing number of working households on what would previously be considered ‘reasonable’ incomes can no longer access home ownership.

The upshot is that whilst home ownership rates are in free-fall –  unsurprisingly renting is steadily increasing.

National’s response to address our critical housing? To reduce demand – not by building more houses – but  by restricting first home owners with a 20% Loan To Value Ratio (LVR). This measure forced a sizeable chunk of house-buyers from the market, whilst local and offshore speculators were allowed free reign.

This is most definitely not what was promised to this nation in the late 1980s, when “trickle down” was supposed to increase our wealth. To the contrary, as the decades slide by, it is more and more apparent that we’ve been cruelly hoaxed.

I am reminded of something John Key said in a speech, when he  scathingly condemned the previous Labour government in an election speech on 29 January 2008;

“Well, I’ve got a challenge for the Prime Minister. Before she asks for another three years, why doesn’t she answer the questions Kiwis are really asking, like: […] Why can’t our hardworking kids afford to buy their own house?”

Postscript – A tale of denial

NZ Herald: Deborah Russell: We all deserve to get a fair go

TV3: Key ‘out of touch’ over housing crisis

Scoop media: You’re wrong John, there is a housing crisis in NZ