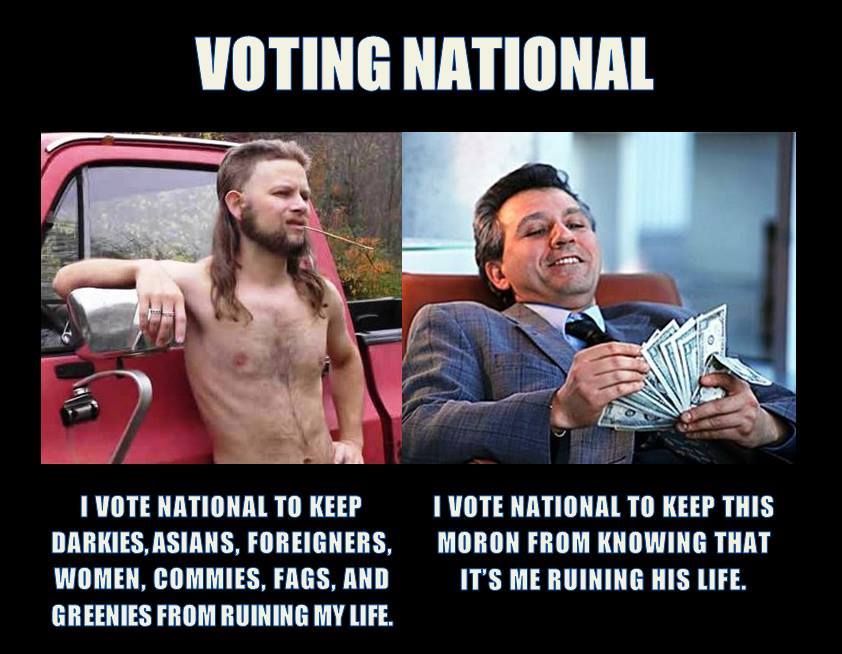 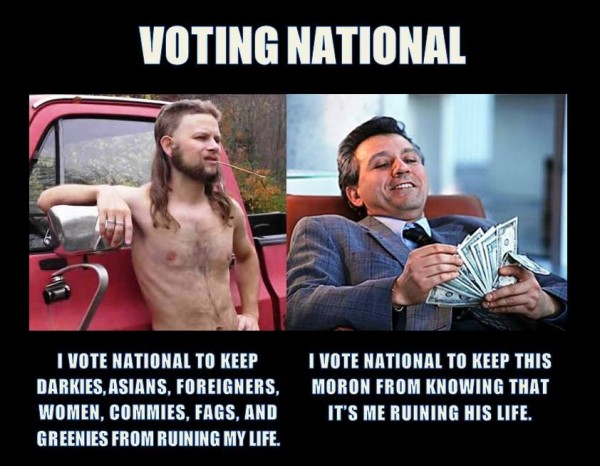 Tax cuts for the rich. A growing deficit. GCSB spying and infiltrating civil society. Denied rights to have a say on activities in the EEZ. Deep sea oil and sea bed mining in precious habitats. Removal of (already limited) environmental protection under the RMA. Destruction of the Department of Conservation. Subsidised irrigation schemes leading to dammed, damned, and polluted rivers. Environmental abuses. Selling out workers’ rights to Warner Brothers and selling off gambling laws to Sky City. No accountability for bosses who oversee deaths of workers, whether it be in forestry, mining, or truck driving. The 90 day fire at will law, and undermining organised labour and the right to strike and join a union. Selling assets generations have built and paid for at less than real value and still failing to ‘balance the books’. The rebuild of Christchurch slow in the hands of monopolists. Appalling child poverty. A growing gulf between the rich and poor. A veto of extended paid parental leave. Cuts to community education. Charter schools. Private prisons pocketing proceeds of crime. Trade deals negotiated in secret binding the nation, sacrificing sovereignty in pursuit of the mighty dollar and cheap and nasty junk. Transport budgets concentrated on mega motorway projects that don’t stack up on benefit:cost analysis and which suck funds from local roads, public transport, walking and cycling. Resistance to Auckland’s City Rail Link. The ‘supercity’. CCOs which disempower the public and put decisions into the hands of the non-elected. Closure of the Dunedin Hillside railway workshops and outsourcing ‘Kiwi’ rail construction overseas with costly effects….

The list of legacies from the National Government go on.

Are you angry yet? Disappointed? Disgusted in this Government and what it’s doing to GodZone?

Even though the Government has the flimsiest of majorities, it supports an unmitigated fast tracked erosion of Kiwi values. Never before have we had so many submissions to write and protests to attend with so little effect. There are an almost overwhelming number of issues of concern for all New Zealanders, which affect our way of life, our quality of life, our societal values and order, and our sense of nationhood. Threats to all that is great and good about New Zealand.

Many of these policy trends reflect what’s also happening in other parts of the developed world. Because they express a corporate agenda, some of the forces are beyond one government’s control. But I do know we have to change this one. Huge damage has already been done.

The National Government legacy is a call to action. To fail to act, to fail to take all measures to change this government, would be to abrogate a duty not only to past nation building, but also to current generations and the future of our country. We have to talk to our neighbours, our kids, our workmates. We have to get people to vote, left.