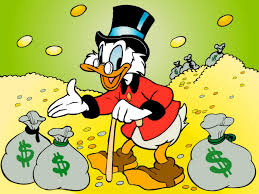 The race is on, the competition is heating up and excitement is mounting.

It’s capitalism’s great race – the quest to grab as much as you can while you live. The winner is the person who dies with the most money.

The latest progress update has just come through (courtesy of Forbes magazine) and it shows just what a stunner of a race this is. Drama at the front as the lead has changed again.

Four years ago Mexican telecommunications mogul Slim Helu powered ahead of Microsoft’s Bill Gates to take the yellow jersey. However the US colossus hasn’t stopped in the rest area as many expected. He’s carefully plotted his comeback and has surprised us all. He’s surged to the head of the leading bunch after a spectacular year ripping the rest of us off.

Such excitement. Such a towering figure of human achievement. How does he get away with it?

Gates is now worth US$76 billion – pause for prolonged applause – while Helu is now a full US$4 billion behind in second place.

There are more contenders entering the event each year however so we shouldn’t rush to judgement.

The world’s billionaires increased in number from 1,426 to 1,645 and their net wealth increased to $6.4 trillion (thousand million) from $5.4 trillion. These people are serious competitors so Gates and Selu can’t rest. We know they’ll be cracking the whip on their employees for bigger profits this coming year.

Here in New Zealand our only serious contender so far is Graeme Hart who on the face of it holds a mere US$7 billion (NZ$8.36 billion) in wealth. This puts him well behind the leading bunch but he has some advantage in youth over many of the older pack leaders. He’ll be able to keep on racing after they pass on – as 16 billionaires did last year. (Good on them – they didn’t win but at least they were in there trying)

Remember the aim is to die with the most money and this year Hart showed we can’t write him off yet. He increased his wealth by – wait for it – $2 billion since the last update. That’s almost a 25% increase in just a single year. That’s unmatched by anyone in the top group. Let’s face it – this kiwi is hot.

We may have hundreds of thousands of kids growing up in poverty whose parents and caregivers work for peanuts in the likes of Hart’s companies but let’s not be spoilsports. Thousands of kids going to school hungry every day is a small price to pay for us having a kiwi up there giving it his best shot – for himself.

Meanwhile Prime Minister John Key, bless his heart, is doing his best to make it easier for other kiwis to enter the great race – just a select few of course. It’s very generous of Key to give up his place as a competitor when he reached $50 million to become a race steward instead. As Prime Minister and New Zealand’s main race official his job is to take away the barriers and smooth the course so the leading contenders can have an easier go of it.

So he’s been working hard to deregulate the economy and drop taxes for the wealthiest New Zealanders to give them their best chance to get into the race seriously. He’s also working tirelessly to transfer democratic power from citizens to the leading international corporates and biggest shareholders so they can get a fairer go too. And why not? The rest of us aren’t serious competitors anyway. Most New Zealanders own just an old second hand car and a few household appliances. Not much wealth there so no point wasting money on them when we can give a few more people a serious chance in the big event.

And wherever possible John Key gives them a refresher during the race – just like the water stand at a marathon. Tens of millions to the wealthiest shareholders in the likes of Rio Tinto and Warner Brothers whenever they ask and plenty more to others who use New Zealand as a tax haven.

Isn’t it great to see a kiwi out there doing his best to help his wealthy mates and make this race more competitive?

If you get offered a miserable pay increase this year don’t complain.

After all that’s what capitalism’s all about.