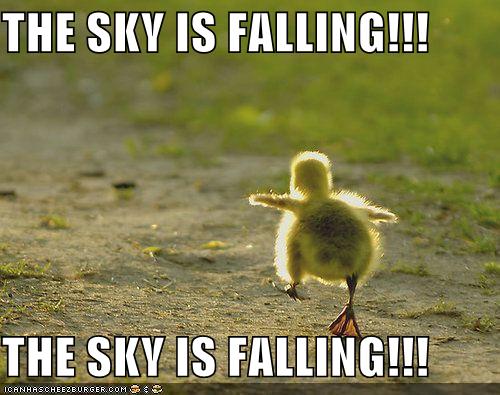 As the rightwing and their business foot-soldiers are continuing their mad panic (or more accurately, their mad attempts to panic the public) over the Labour-Green proposal for a single electricity buyer-desk, aka, NZ Power – the public have moved on.

Not that the right wing have noticed. Their fear-campaign is still cranking out all manner of garbage to strike the Fear Of Mammon into the hearts and minds of the Great Unwashed Masses.

After only the first paragraph, O’Reilly launches into a list of dire sky-is-falling list of Doomsday scenarios;

O’Reilly left out terrorist attacks, alien invasion, and God striking us down with thunderbolts.

Some of his rhetoric is so bizarre that you have to wonder if O’Reilly actually believes his own BS. Take for example this remark,

“Electricity prices rise because a growing population and growing economy bring growing demand for power, and growth in demand requires investment in new generation plant, which is large-scale, long-lived and expensive to build.”

O’Reilly then goes on to claim,

“Much of the 64 per cent price rise under Labour resulted from interventionist policies.”

So if I have this straight; according to Mr O’Reilly, “Much of the 64 per cent price rise under Labour” is due to “a growing population and growing economy bring growing demand for power”?!

Because that’s what he is implying;  growing population + economy = 64% in electricity price rises.

As for suggesting that New Zealand’s economy grew by 64% during Labour’s term in office – as much as every left-winger  would love to acknowledge that – no. There has never been that degree of growth in New Zealand between 2000/08 or even 2000/13. Or any other decades;

After all the fear-mongering and name-calling, the only word left to describe O’Reilly’s piece is; laughable. His assertions are derisable; his “facts” are dubious and unsupported by evidence (ie; he’s made it up); and his fear-threat of more expensive mortages is  bogey-man stuff.

It may come as a shock to Mr O’Reilly – but whilst some of the public can be gullible, we are not that thick.

Nor do we willingly believe absurd claims like this,

“Electricity prices must take into account the cost of building new generators – if they didn’t, we’d find the lights would go out the moment we exceeded our capacity.”

Yes, we have had power cuts in the past. Usually due to low water storage in the dams; transmission line failure; or other equipment break-downs or shut-down for maintenance.

But let’s not forget the our entire past electricity generation infra-structure, such as Manapouri, Benmore,  Clyde Dam, etc,  were the  result of State  interventionist investment in energy infra-structure.

None of it was built by private enterprise in response to “consumer demand”. Private investment has been a relatively recent advent, such as Contact Energy’s Te Mihi development – a project, by the way that was under-taken during  Labour’s administration. (See: Te Mihi Power Station)

New Zealand has built up it’s energy infra-structure. We can do it again, when required. We most certainly did not rely on private enterprise.

But these are all “inconvenient facts” that the Right refuse to deal with – or even acknowledge. Right wingers like O’Reilly tend to re-write history in an Orwellian fashion, to suit their neo-liberal agenda.

The associated poll with O’Reilly’s op-ed piece is hardly scientific, but as an indicator, it shows that people are waking up to the biggest con of the last thirty years of New Right “reforms”,

Nearly two-thirds think that cheaper electricity is “about time”.

Just over a third want to “stick to what we’ve got”. Bloody National supporters – thick as two planks.

Well, I have a perfect solution to the demands for both groups;

Both groups are catered for.

Those who want it, will get cheaper power.

National supporters (and we know who you are, you very thilly, thilly people) can keep getting gouged.

Choice for everyone, eh?