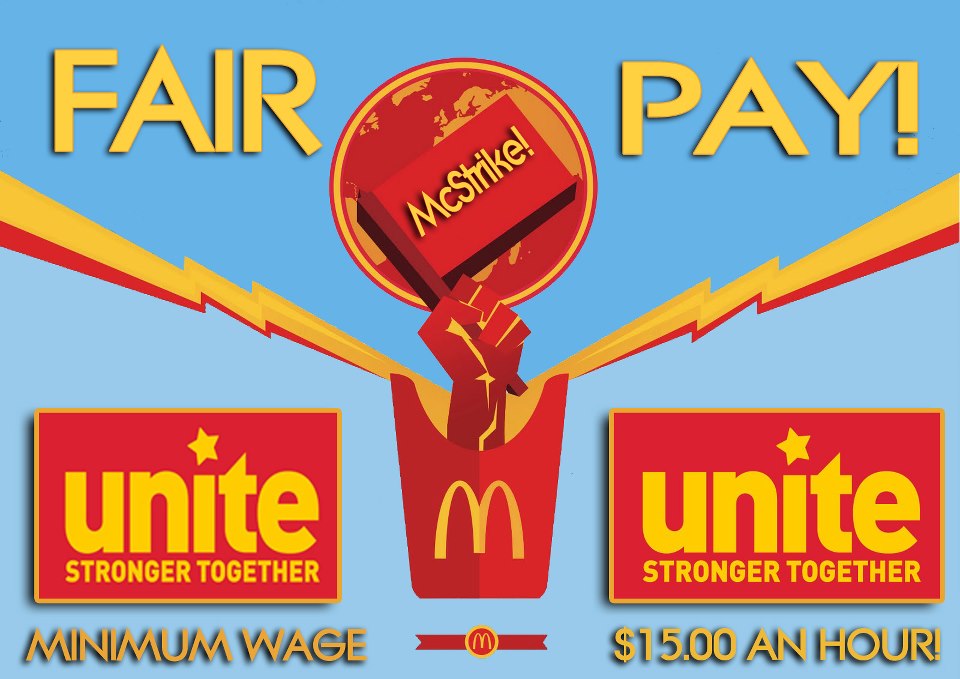 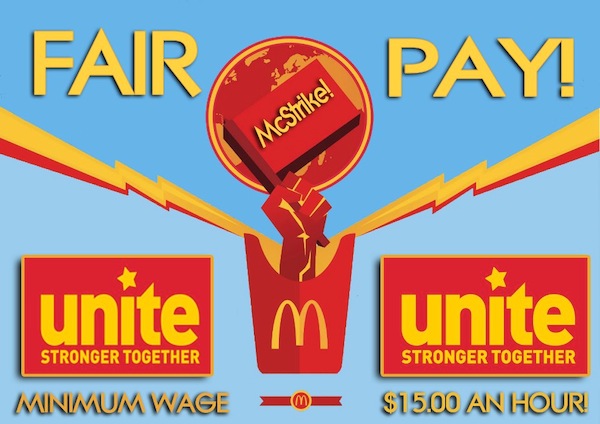 On May Day this year McDonalds workers in Auckland took action to support an improved offer from the company in their negotiations for a new collective agreement. A lively picket was established outside the flagship Queen Street store in central Auckland City.

McD’s called the cops to be their private security for the night and they kindly obliged by sending two paddy wagons loaded with a couple of dozen of the boys (and girls) in blue to shove the picket a few meters further away from the store entrance. They remained there for the next hour or so until the picket ended – clearly nothing much else for them to do in Auckland.

Ironically the McD’s workers are fighting for things won by the generation of workers that started May Day as a day of international workers action in Chicago 127 years ago.

On Saturday, May 1, 1886—a work day—35,000 Chicago workers walked off their jobs, demanding the eight-hour day for 10 hours’ pay. Strikes for the eight-hour day continued throughout the city, police rioted, and four workers who had led demonstrations (three of them German-born immigrants) were hanged. A international socialist congress in 1889 adopted May Day a day for strikes and demonstrations in every country for the 8 hour day.

Workers in many countries – including New Zealand – went on to win an 8-hour working day and a 40-hour working week. “Penal rates” on time and a half or double time were established for working in excess of these hours – sometimes backed up by law. This was true in New Zealand until the anti-worker laws adopted by a National government in the 1990s saw nearly all legal protections stripped away.

Workers like those at McDonald’s became “casualised” with no guaranteed hours in any day, or week. There are technically no full-time workers at McDonald’s outside of management. Every crew member has to just wait and see each week what his or her roster is for the following week and what days or hours they will be working. Usually they will only get 20-30 hours but it can go up and down significantly.

Inevitably this is ripe territory for favouritism, bullying, discrimination. Workers discover that is they stand up for their rights or simply fall out of favour for whatever reason then they will have their hours cut the next week. Hours are cut as punishment for small infractions like lateness without proper processes.

On the other side of the issue we have workers in industries like security who are on near minimum wages and have to work 60-70 hours a week to make ends meet – but there are no overtime rates for them.

The 8-hour working day has been lost at both ends.

Unite has been slowly trying to get some of the rights that were lost back into the collective agreements we are negotiating. We began with clauses in the contracts saying no new workers should be hired until existing staff are given all the hours they want. But often the bosses simply ignore even their legal obligations. This has been true throughout the fast food industries as they try to run the stores with the least labour they can get away with.

We have made the most progress at Restaurant Brands – which owns KFC, Pizza Hut, Starbucks and some Carls Jr stores. We have a strong clauses around security of hours and a strict breaks schedule. We have overtime rates after 8 hours a day. Workers get off the minimum wage by around a $1 an hour after about six months on the job. There are fee meals on shift. We also have a collective agreement allowance of $4 a week per member paid to a union trust fund to purchase benefits for union members that can’t be passed on to non members.

McDonald’s workers are determined to at least equal Restaurant Brands this year. But this won’t be only an industrial campaign. We know that our original success in getting collective agreements in this industry in the 2006-7 “Supersizemypay” campaign was as much about public support as workers actions. The companies were concerned as much about their brand image as the action being taken by their workers.

Again this year we want that public support for the pickets and protests that will be occurring. We want community groups, parties, unions to consider “adopting” a McD’s store to picket on a regular basis while this campaign continues.

Together we can win.