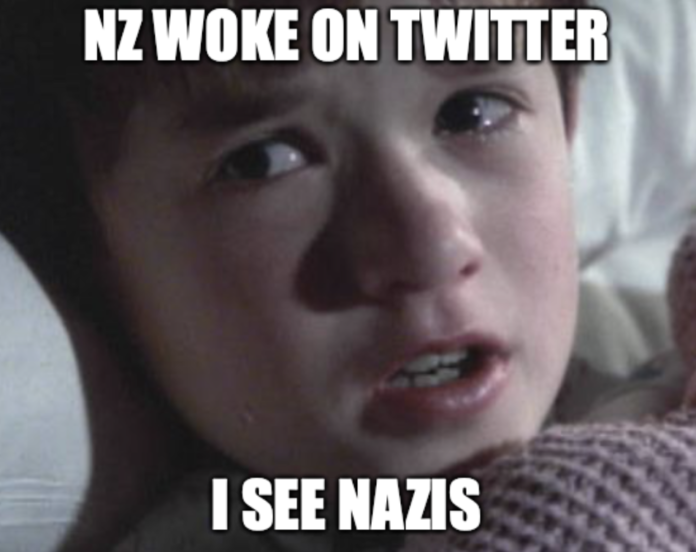 I tend not to listen to RNZ, if I wanted to be talked down to in a condescendingly smug manner, I’d just fly direct to Wellington! But it’s important now and then to dip ones toe into the rarified air of the plush velvet studios that is the elitist of elite identity politics opinion to see how the big events are being rounded down for cosmopolitan dinner party virtue signals.

The Neale Jones smack down on Nine to Noon was glorious.

It’s almost 30 minutes of Kathryn and Brigitte highlighting the lethal arrogance of Neale and by extension the entire Woke Left Twitter argument that everyone protesting at Parliament is a Nazi.

The Woke must paint out any disagreement as persecution and the winner of Woke Olympics is the one who can be the most offended by the worst monster.

Neale’s argument was, “Nazi’s threatening to kill politicians and health officials are the worst monster! I win”.

Unfortunately for Neale and the Wellington woke, Bridgette and Kathryn were having none of that. The RNZ highest of the highs are intersecctionist enough to know their privilege is a problem when covering the protests and so demanded how de-escalation occurs for working class protestors who fall foul of middle class dinner party etiquette.

Neale only had ‘but they are Nazis’ as an argument which of course justifies why the Police need to be sent in swinging batons.

A revolution came to Parliament but it was middle class woke activists like Neale who were revolted!

The modern left are middle class, they have benefitted from work from home because they have nice homes. The perverse outcome of Government Covid support has made the rich far far far richer while those on Parliament’s lawns have suffered.

This spectrum of working class dispossessed, the ones who have borne the harshest yoke of vaccine mandates economically and socially, they have had their misery harvested by Far Right Steve Bannon inspired propaganda and Qanon mysticism, of that there can be no doubt.

While their pain may be self inflicted and emotionally manipulated by the Far Right, it is the reality that they have been left behind economically, Bernard fucking Hickey pointed this out!

The middle class woke like Neale who have benefited from this refuse point blank to legitimise those working class pains on Parliament’s lawns because it challenges their own privilege.

It is only these protestors lack of education that isn’t connecting the facts of Bernard Hickey to the pain they are bearing. Once that happens, expect tens of thousands more to join. Bridgette and Kathryn understood that threat in their ivory tower broadcasting booth, Neale not so much.
“Let the ruling classes tremble at Communistic revolution. The proletarians have nothing to lose but their chains. They have a world to win. Workers of all countries, unite! Except in Wellington. Those Lumpenproletariat Nazis can go fuck themselves”