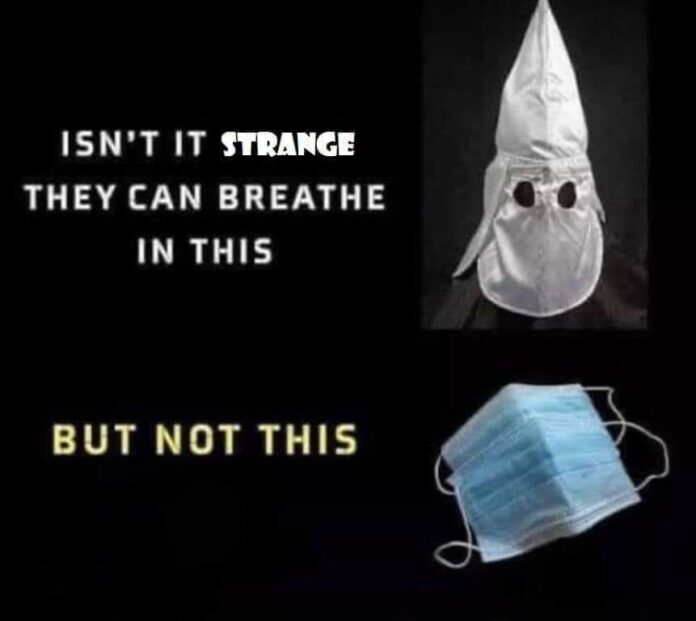 You know who I’m talking about.  There is nothing like a pandemic to bring the far right out onto the streets.  Especially in Christchurch, where we are blessed with plenty of them. Whether they are spitting at security guards in supermarkets or congregating under the Bridge of Remembrance to protest lockdown, we are stuck with them.

They are idiots and sometimes worse (much worse). Their lives are built on hate.  They hate the government, any government.  They hate Muslims and Indians and all Asians and are so angry New Zealand has become multicultural.  They want a white New Zealand or, in the case of Billy Te Kahika and his colleagues, a ‘free’ New Zealand.

The live in a vicious cycle of the hate, conspiracy theories, internet memes, protests and defining themselves in opposition to the world.  They are mostly men, but some women are involved too. They do not have a high opinion of women generally.  Siouxsie Wiles, with her pink hair and endless knowledge and wisdom, really sets them off.  If they see her having breakfast in a Wellington hotel, they feel the need to SHOUT IN HER FACE and send her death threats for dessert.

So angry. Death threats. Invoking fear.  They are all over the internet, trying to ensure that their voice has some parity with all other voices.  Yes, we have seen them on TBD, of course we have.

They are not very good at communicating their views persuasively to others, and this makes them angry (everything makes them angry). Spitting is sometimes the best they can do.

But what do we want for them?  My readers know that I have strong views about the sheer waste and ineffectiveness of the institutions of justice.  This weekend, one of our habitual right-wing protestors, Kyle Chapman, is spending a leisurely weekend in custody, whether in the police cells or out in the prison.

Perhaps he needs to be quarantined for his own good and the good of the rest of us.  He was determined to breach the level 4 lockdown and is paying the price.  But it doesn’t solve anything, does it? His views won’t change.  He’ll be back out next week disobeying the law, because that’s what you do if you are him.

Or perhaps he will stay inside and right-wingers will have a ‘free Kyle Chapman’ march through the streets next week, leading inevitably to further arrests.

What to do with them, the little creeps.  They have the right to hold their views but not to act on them in ways that hinder or endanger others. But acting and endangering is exactly their plan. They are like the early Christians (and later Christians), needing to proselytise, persuade and convert us all to their (frankly) flawed thinking.

It is important to remember that this group is not just a rag-tag bunch of incel misfits, although there are those among them.  We know there are some people of intelligence because of the Plan B crowd and the doctors against vaccination lot.

The ‘Plan B’ lot were back in action this week, saying that if only we had allowed herd immunity from the start, then we would not be in this situation now.  These people would have welcomed a small culling of the weak and vulnerable (I am not making this up – one of them said it this week).

The thing is, Covid isn’t something you get once and it is over.  You can get it twice, it is mutating fast, there are the worrying ‘long Covid’ variants and, oh yes, those weak and vulnerable are someone’s loved family members and friends. So the Plan B lot are defeated by the very nature of the beast they want to proliferate in the community, that slippery Covid virus.

So let’s not imprison them. Re-educating them seems impossible.  Not only are they not on the same train as the vast majority of us, but they also aren’t even at the same station.  As a socialist and a feminist, I have known what it is like to have minority views, and to argue to deaf ears over my views.  And such arguing has never changed my views, and it won’t change those of the little Trumpian army that is in our midst.

We can (and should) arrest them for endangering the rest of us.  A nice hefty fine, well-enforced, should ‘make them pay’ for attempting to cause harm in the community.  Where they are promoting small genocides of the old and vulnerable, all in the name of the science of herd immunity, they need to be challenged but not criminalised (unless they advocate the death of named people, of course).

I am of two minds about harassment.  I think there are lines that must not be crossed. I am reminded of the terror felt by one of the young women in my recent sexual harassment research when a guy on a bike pursued her along a main road screaming “I am going to rape you”.  This feels like a line to me. Annoying Siouxsie at breakfast is one thing; threats to her over the scrambled eggs are another.

I quite like the idea of naming and shaming on the internet. The natural consequence of your bad behaviour is that it can be replayed over and over on YouTube. But there is not much in our law to protect people against false accusations. Ideally, the use of phone videos can allow people to self-incriminate, and I have no problems with that.  But it is hard to get good footage when one is being pursued by a madman on a bike.

And that’s as far as I can get at this stage. I haven’t even covered the question of spreading misinformation into vulnerable communities -perhaps next week? The aliens causing Covid – perhaps September.

Stay at home and keep safe, my friends.