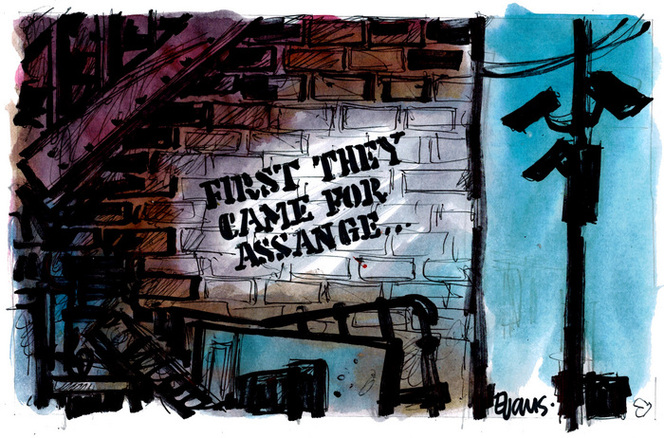 No one can be watching the Free Speech vs Hate Speech culture war and not be scared shitless by the most recent woke lynching of Rachel Stewart.

Award winning Herald columnist, avid falconer, hunter, climate crisis activist, well known lesbian, staunchly feminist, firearms safety advocate, policy researcher, then treasurer, then president of the Whanganui chapter of Federated Farmers – THAT Rachel Stewart had the cops bust into her house and seize her guns because of this supposed threat to kill some white male who was lecturing her on feminism… 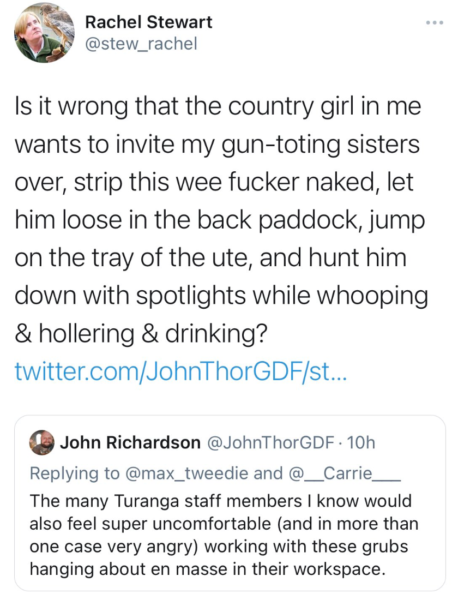 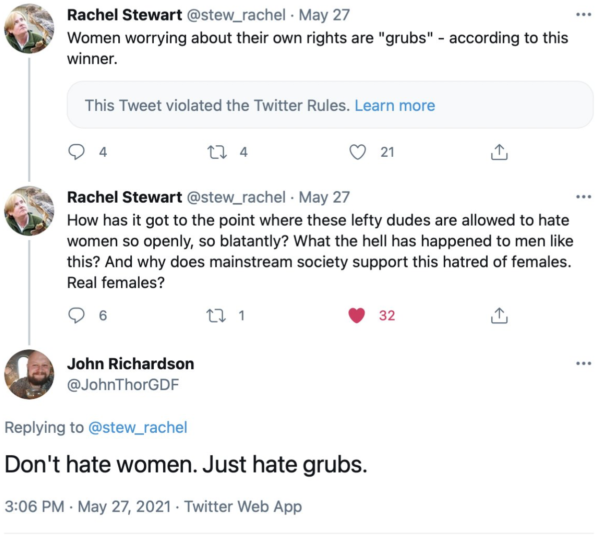 …THAT tweet which has not been removed by Twitter (the tweet from the white male referring to women as grubs hilariously WAS taken down by Twitter) was justification enough for the woke to lay a complaint about Stewart claiming that as a Terf she was a threat to transsexuals and as such she must lose access to her guns.

Note the police did not look into Award winning Herald columnist, avid falconer, hunter, climate crisis activist, well known lesbian, staunchly feminist, firearms safety advocate, policy researcher, then treasurer, then president of the Whanganui chapter of Federated Farmers Rachel Stewart’s background and see that this was a malicious complaint, nor did they err on the side of caution and send over an older wiser Police Officer to ascertain Rachel’s threat level, oh no, the Police chose to defame Rachel by claiming she was a physical danger to the transsexual community and seize her guns.

The Free Speech Union must urgently step in and take a case of discrimination through the Human Rights Commission because the Police have breached Rachel’s Civil Rights which state she shouldn’t face wrongful search or seizure by the State who have clearly discriminated against Rachel for having a political opinion!

Rachel was obviously joking in her tweet and clearly poses no physical threat to the Trans community, pretending otherwise is disingenuous at best, lynch mob rule at worst.

If this is what the Twitter woke will do under existing laws, what do you think they will do with the new Hate Speech laws?

Rachel is but the first victim of their cancellation list. This is going to get very, very ugly and the middle will look at these examples and the bloodlust of the woke and they will stop fearing minorities facing hate speech and will start to fear that they will be accused of hate speech!

Turning and turning in the widening gyre
The falcon cannot hear the falconer;
Things fall apart; the centre cannot hold;
Mere anarchy is loosed upon the world,
The blood-dimmed tide is loosed, and everywhere
The ceremony of innocence is drowned;
The best lack all conviction, while the worst
Are full of passionate intensity.

Surely some revelation is at hand;
Surely the Second Coming is at hand.
The Second Coming! Hardly are those words out
When a vast image out of Spiritus Mundi
Troubles my sight: somewhere in sands of the desert
A shape with lion body and the head of a man,
A gaze blank and pitiless as the sun,
Is moving its slow thighs, while all about it
Reel shadows of the indignant desert birds.
The darkness drops again; but now I know
That twenty centuries of stony sleep
Were vexed to nightmare by a rocking cradle,
And what rough beast, its hour come round at last,
Slouches towards Bethlehem to be born?

What rough beast indeed, this madness is going to hurt the Left badly.

The same woke rolling their eyes at free speech concerns are the same woke who will be calling Police to claim hate speech once it passes.

The spittle of anticipation from their fangs for a purge is woke fascism!

Mark my words, if this Hate Speech madness passes it will unleash a tsunami of Police complaints as schisms turn on schisms and social media will erupt with roaming lynch mobs seeking justice for a thousand sleights.