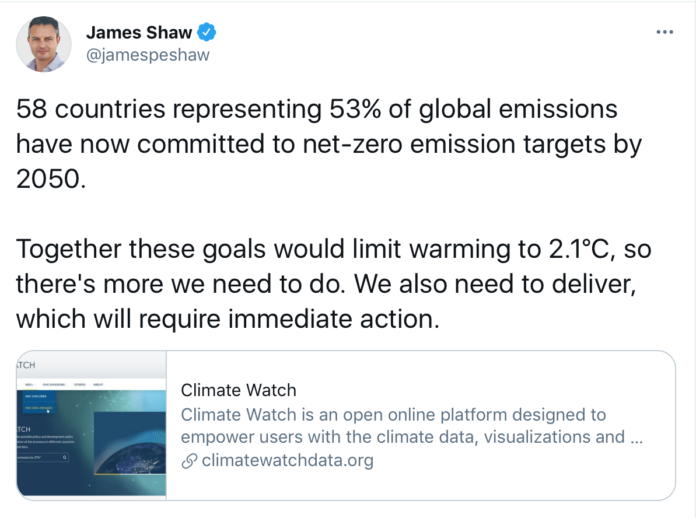 Even if 53% of polluters  all cut our Carbon down to neutral by 2050, that would lock in 2.1degree temperature rise which according to NASA would see vast parts of the planet biosphere collapsing…

At 1.5 degrees Celsius warming, the report projects that climate-related risks to human health, livelihoods, food security, human security, water supply and economic growth will all increase, and will increase even more at 2 degrees warming. Disadvantaged and vulnerable populations, some indigenous peoples and communities with livelihoods based on agriculture or coastal resources will be at the highest risk. Regions at highest risk include Arctic ecosystems, dryland regions, small-island developing states and the least developed countries. Some populations will see increased poverty and disadvantages. Limiting warming to 1.5 degrees Celsius could reduce the number of people susceptible to climate-related poverty risks by as much as several hundred million by 2050.

Heat-Related Illness and Mortality – The risk of heat-related illness and death will be lower at 1.5 degrees Celsius warming than at 2 degrees, finds the report. Cities will experience the worst impacts of heatwaves due to the urban heat island effect, which keeps them warmer than surrounding rural areas.

The elderly, children, women, those with chronic diseases and people taking certain medications will be at highest risk.

Vector-Borne Diseases — More people will die from vector-borne diseases like malaria and dengue fever, with risks increasing more at 2 degrees warming, according to the report.

Food Security — Food security is expected to be reduced at 2 degrees Celsius warming compared to 1.5 degrees, say the report authors, with the largest risks emerging in the African Sahel, the Mediterranean, Central Europe, the Amazon, and Western and Southern Africa.

Economic Impacts — Risks to global economic growth from climate change impacts will be lower at 1.5 degrees Celsius than at 2 degrees by 2100, with the biggest impacts expected in the tropics and Southern Hemisphere subtropics, according to the report. In the United States, economic damages from climate change are projected to be large, with one 2017 study concluding the United States could lose 2.3 percent of its Gross Domestic Product for each degree Celsius increase in global warming. To put that into perspective, that would amount to more than $446 billion based on U.S. Gross Domestic Product of $19.39 trillion in 2017.

Small Islands and Coastal and Low-lying Areas – The report says these areas will see multiple climate-related risks at 1.5 degrees Celsius warming, with these risks increasing further at 2 degrees warming.

…as TDB has been pointing out since 2017. being carbon neutral in 30 years does sweet bugger all in terms of preparing NZ for the radical adaptation it requires.

Being Carbon neutral in 30 years is not a solution to the climate crisis, and if you think it is, then you are part of the problem!