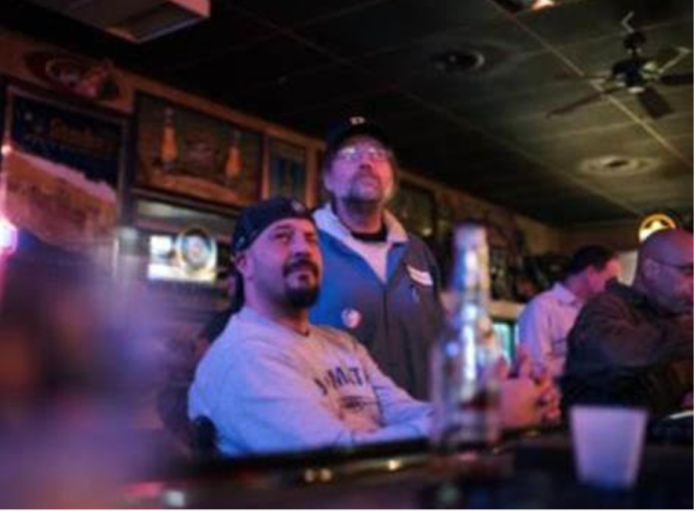 “Don’t you touch that remote, barman! Me and my friends are enjoying watching the President beat the living crap out of Sleepy Joe Biden, senile old bastard.”

Jerry sizes-up the huge man in front of him. The bulging biceps, the impressive amount of ink, the MAGA cap on his head, and nods.

“Sorry, Carl”, he says, moving down the bar and pouring his old friend a free glass beer by way of apology.

“No, no, it’s alright, Jerry. I shouldn’t have asked you to deny your patrons their gladiatorial sport.”

“Gladiatorial? Doesn’t that imply two evenly matched fighters? Not much evidence of equality in this contest. More like a face-off between a Christian and a lion.”

“What does it say about this country, Jerry, that this is the choice we’ve been given? Between a septuagenarian grifter and a septuagenarian dotard. Three hundred and thirty million Americans and the best candidates we can come up with for President of these United States are Donald Trump and Joe Biden!”

“What it says, Carl, is that the people of this country are hoping that a Democrat Dad or a Republican Pop will sort everything out. Not themselves, they don’t really trust themselves. And certainly not their kids. The younger generation are a complete mystery to them. They’re reaching back to those times in their lives when they turned to Mom and Dad for help. When their first marriage crashed and burned. When their second business failed. When their eldest daughter got pregnant to that drug dealer. When the factory closed and they lost their job. Those moments when they were at a loss. When they were scared. When they needed help.”

Carl throws back his beer and brings the glass down on the bar with a crack.

A great cheer goes up from the MAGA men. Carl looks up at the big screen and turns away quickly from the bewildered expression on Sleepy Joe’s face.

“Poor old bastard really is getting a shellacking – as Obama used to say. And all those guys in the caps: why in God’s name are they cheering-on a New York billionaire who pays $750 a year in taxes? Jeez, that’s less than half what those guys pay the IRS. Dammit! They’re all working stiffs, just like you and me. Why can’t they see that Trump is not their friend?”

“Oh, come on, Carl, you know that ain’t true. He’s been a better friend to them than Hilary Clinton would ever have been. He gets them, Carl. He knows them. They’re the guys he used to josh around with on his daddy’s building sites when he was a teenager. Remember Nixon’s Hard Hats from the 1970s? The guys who beat the living shit out of those anti-war hippies outside the New York Stock Exchange. Trump’s always known that the American working-class ain’t exactly full of liberals.”

“And I’ll tell you something else. At some place, deep, deep down, they get him, too. They know that only Fat Cats can get Fat Cats. Guys like them, working stiffs, as you call them, they worked out long ago exactly how much power they don’t have. The guys who worked for Trump senior, their unions were all run by the Mob. Look the wrong way at those wise-guys – let alone stand against one of them for the presidency of the union – and likely as not you’d end up in the foundations of one of old man Trump’s tenement buildings.”

“Wasn’t it? What was Franklin Delano Roosevelt, if not a Fat Cat from upstate New York? What else was Jack Kennedy? Jesus Christ, Carl, the guy went to Choate and Harvard! You know what his daddy told him, Carl? As he was preparing to send his little boy to the White House? He said, ‘Son, to become President of the United States you only need three things. The first is, money. The second is, money. And the third is, money.’ And, guess what, Joe Kennedy had plenty of all three!”

“Yeah, well, Clinton wasn’t from a rich family, and neither was Obama.”

“And didn’t it show, Carl? Didn’t it show! They couldn’t do enough for the big boys on Wall Street. Look at Obama, when he summoned the big bankers to the White House. Man, they were quaking in their boots. They thought Obama was going to go after them with an axe. Did he? Like hell he did! He told them not to worry. He bailed out their banks. He rescued Wall Street. What about Main Street? Fuck Main Street! Ordinary folks – like those guys in the caps – they have never been too big to fail.”

“Oh my God! Did I just hear Trump tell the Proud Boys to ‘stand back and stand by’?”

“Judging by the cheers and the fist-pumping, Carl, I think that’s exactly what you heard.”

“Jesus Christ! What they hell is it with this guy? Does he really want a civil war?”

“Actually, Carl, it is that bad. This country’s tired, bone-tired, of pretending to be something it’s not. It’s tired of trying to live up to Lincoln’s “better angels”. Everybody knows that the stories America tells herself are the worst kind of lies. We’re a vicious, rapacious people: always have been, always will be. How does Bob Dylan put it in his song, Blind Willy McTell? ‘Well, God is in his heaven, and we all want what’s his. But, power and greed, and corruptible seed, seem to be all that there is.’”

“Carl, I’m just getting started. You know I love to read history.”

“Oh yeah. We all know about you and your history books, Jerry.”

“Well, let me tell you something about the Roman Republic. It was brought down by wealthy men. Not aristocrats, mind you, but plutocrats. And do you know how these Fat Cat Romans, brought it down? By siding with the plebs against the aristocrats. By promising to look after them – and keeping their promise. By pledging to expand the Empire – and making Rome great again. By sharing with the plebs the wealth which the Senate and People of Rome plundered from the tribes and cities they conquered. I tell you, Carl, the American republic is going to end exactly the same way. It’s going to be brought down by an unholy alliance of the very rich and the very poor. It’s going to be destroyed by an American Caesar.”

Carl’s response is drowned out by the guys at the end of the bar breaking into a chant: