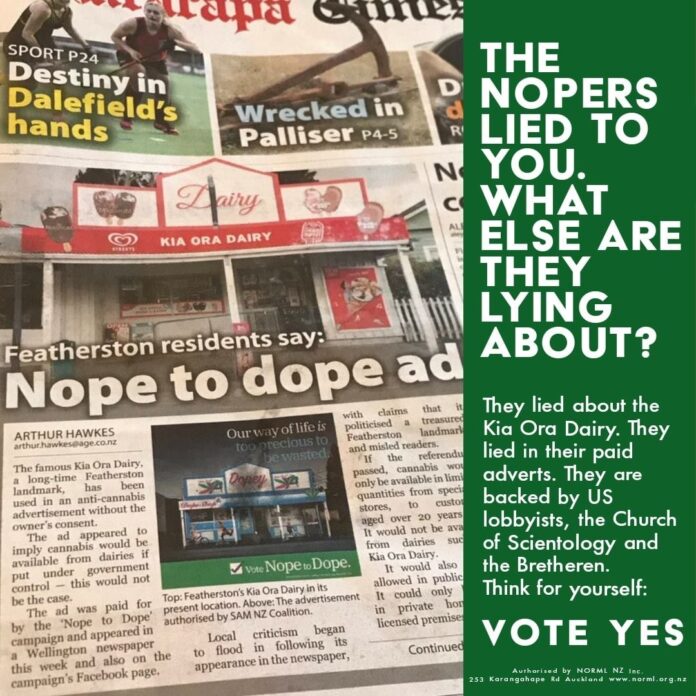 The cannabis referendum campaign has become a battle of truth versus lies – and the facts are losing.

While the various Yes campaigns focus on sharing facts and building points of agreement, the modus operandi of the Nopers is to spread fear, misunderstanding and distrust.

While some recent polls have shown Yes and No tied in a dead heat, or too close to call, the latest TVNZ Colmar Brunton poll of intending voters shows Hope trailing Nope by 35% to 53%.

That poll should throw all supporters of truth and justice into a sweaty panic!

The battle is far from lost; the worst we can do now is give up or opt-out because it’s too hard or “they’ll never do it anyway“. That sort of despondent, confused, thinking is exactly what the Nopers are hoping for.

Cannabis has a unique ability to inspire people to vote. It raises turnout everywhere cannabis ballots have been held. Cannabis ballots may even have helped elect Obama to his second term as US President, by bringing out more progressive voters.

But in order to overcome the Noper’s tactics of fear and division, we first need to understand them.

We perhaps also shouldn’t give them too much credit: Covid-19 is the number one issue this year, and everything else has taken a back seat.

With so much fear, anxiety and worry already floating about it’s no wonder the Nopers have been able to play on that with their huge budget for fearmongering.

A battle of good vs evil, and facts vs bullshit

Alex Braae at The Spinoff has written about how Bob McCroskie and Family First run their Nope campaign. It is clear they are a well-resourced and formidable campaign machine.

The Nopers are holding meetings at churches and community halls, using slick presentations that sound truthy-enough to stoke fear and apprehension.

Funding for the Nope campaign comes from religious conservatives and wowsers, such as the Church of Scientology.

Their advice comes from US lobbyists such as SAM USA, and drug testing firms who stand to make lots of money if prohibition is retained.

Their tactics are to drown out the truth in a barrage of fake news, false information, and outright lies.

They do this safe in the knowledge that their pockets are deep, that the Advertising Standards Authority almost always rules on the side of advertisers – or won’t even consider it – and any ruling would come after the referendum and wouldn’t stop any ad.

So they just keep pumping out their false narrative, designed to stoke fear and apprehension among voters.

Their doctored image of Featherston’s Kia Ora Dairy, which Say Nope To Dope paid to run in newspapers nationwide, was wrong in almost every aspect and backfired by outraging residents of the Wairarapa town.

However, it had the intended effect of getting nationwide coverage based on fear.

While pumping out a fire hose of disinformation, the Nopers also encourage their supporters to lay false complaints against those who push the truth about cannabis and its associated laws; the good folk supporting the Yes campaign.

The NZ Drug Foundation won a previous ruling against a false complaint about their ads. Last week Make It Legal fought off another spurious complaint. Both were laid with the ASA about demonstrably true claims that voting Yes would make medicinal access easier and cheaper.

I’ve been saying the same thing all along – and I also say that as the CEO of a licensed medicinal cannabis company. The truth is, medicinal access even under our new rules is still far too difficult and too expensive for most people.

Access to medicinal cannabis comes down to personal income. Those who can afford it get access, while everyone else must remain in the illicit market.

Voting Yes would allow patients to grow their own, or go to a shop and buy low-dose products over the counter. It’s pretty hard to deny that that wouldn’t make access “easier and cheaper” – but facts have never stopped the Nopers.

Thankfully, the industry-led ASA ruled that Make It Legal’s claims were fair enough.

Yes campaign plays nice while Nopers get away with murder

This could be seen on TVNZ’s Q&A with Jack Tame which had a cannabis referendum debate, featuring Green MP Chloe Swarbrick and AUT professor Khylee Quince presenting the case for Yes, and the NZ Medical Association’s Dr Kate Braddock and National MP Nick Smith arguing for No.

The two guests who supported Yes were respectful, didn’t interrupt and tried to discuss the matter at hand.

The Nopers, true to form, interrupted with false claims and distractions, or mouthed truthy-sounding platitudes designed to stoke fear and worry about what might happen.

Chloe made a big mistake at the outset of the debate. In hindsight, our campaign has been making the same mistake over and over again. We build agreement and display our reasonableness by opening with a statement that we all agree cannabis causes harm, but we question how society can best deal with it.

Rather than building agreement so we can all move forward, that position actually cedes ground to the Nopers, and frames the discussion as “cannabis is harmful”. It implies that all use is harmful, and that strong intervention by state agencies is justified and desirable.

Yet the truth is that the vast majority of cannabis use is not harmful, and no intervention is justified. The Otago and Christchurch longitudinal studies, for example, found that up to 80% of New Zealanders have tried cannabis (so it is normal), but only around 10 per cent or so experience harms from their use.

The researchers of both those studies, Prof Joe Boden and Prof Ritchie Poulson, notably support a Yes vote.

Facts don’t seem to matter to National MP Nick Smith, a prominent campaigner for Nope. He’s a good debater who could argue either side, and I suspect he’s just doing his job to get National elected. I mean, he couldn’t possibly believe the stuff he’s saying, could he? On Q&A Nick Smith claimed:

1. “This is not about medicinal cannabis.” Actually patients and doctors are supporting Yes because existing scheme is too hard and too expensive. In fact, the only increase in cannabis use seen in US states that have legalised has been older folk obtaining over-the-counter “adult use” cannabis for their aches and pains.

2 “Legalisation will increase cannabis use and harm… it is called dope for good reason.” In fact, underage use in Canada dropped by half in just one year after legalisation. The road carnage Smith shouts about is based on flawed data: ESR included drivers with any trace of cannabinoids, which can linger for months, but only included drunk drivers who were over the legal limit (to be consistent, they should also have included anyone who drank any alcohol in recent months).

3 “Legalisation will not eliminate the black market and gang harm”. Smith is actually confirming prohibition does not work and has created a lucrative illicit market that supports organised crime. Legalisation may not “eliminate” it completely, but that’s better than supporting the status quo which created that market in the first place.

4 “A billion dollar dope industry with 420 stores around NZ ( concentrated in our most vulnerable communities) whose motive will be to push this drug and sell more.” In fact, that billion dollar cannabis industry already exists, with hundreds of tinny shops already in vulnerable communities. Cannabis won’t be invented by the referendum, but it could be brought under control and out from the shadows. The model proposed by the referendum would generate $675 million for local health and education, plus $200 million in income tax, plus GST, plus savings from ineffective and counterproductive law enforcement.

5 “Timing could not be worse for combo of dole and dope.” In fact, making cannabis legal could help New Zealand’s economy by generating 5000 legitimate and taxpaying jobs (according to BERL), with more vocational pathways and increased regional economic opportunities.

Meanwhile on TV3’s Paddy Gower on Weed, the host had a blast catching up with various potheads and growers (I had my own catch up with Paddy on 95bfm’s Marijuana Media – listen to the podcast here).

The king of “gotcha journalism” had been commissioned to produce a follow up to last year’s 2-part series on medicinal cannabis. Those two shows had a ground shifting effect on the public’s perception of medicinal cannabis patients and providers.

Where previously there had been some hesitation, this had changed to full support. People saw on mainstream television the way prohibition had denied safe and affordable access to patients struggling with debilitating and painful conditions. They saw how medicinal cannabis helped them. They saw they sky did not fall, and they were reassured.

So we had high hopes for this week’s referendum-themed follow up. It was certainly filled with cannabis eye-candy. There were lots of scenes of consumption and flowering plants, from illegal grows hidden in cupboards and basements to high-tech licensed grows for medicinal production.

If anything, the show proved cannabis use is widespread and entrenched in New Zealand. It isn’t going away.

Hopefully the primetime mainstream media slot for the show provoked some good discussions among the families watching it. Hopefully they learned something. Hopefully they’re now a bit less likely to accept the lies and fear served up by the Nopers.

Because the truth about cannabis, if people knew it, would literally set them free.