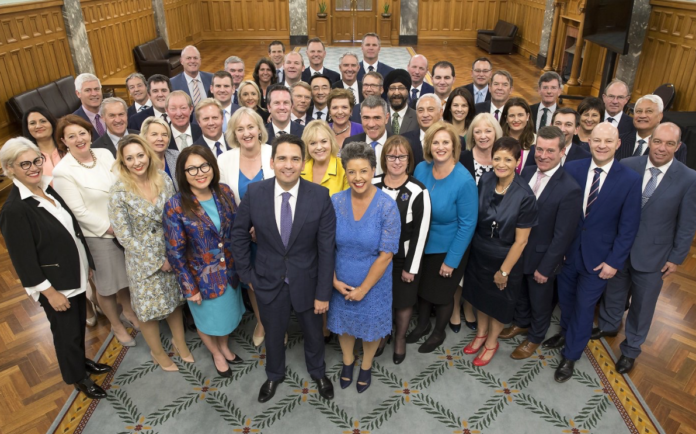 I ended the week feeling sorry for Simon Bridges. By all accounts he is a decent person but being leader of the Opposition was always going to be tough. Against Jacinda Ardern whose communication skills are legion, and whose confidence in front of the media gives her a strong lead on any competition, Bridges looked fumbling and inadequate. The polled public, his party and the media apparently thought so too.

As news of the National Party leadership coup broke this week, we saw photos of Nikki Kaye and Todd Muller besieged by the press. The media had a new set of targets. Here’s Nikki Kaye getting into a taxi, here’s Todd Muller walking down a hallway with his wife. Here are a dozen cameras in Muller’s path. Here’s Simon Bridges walking into judgement, and subsequently, Paula Bennett and Simon trying to hold face in front of that same ruthless media lens.

In modern day politics, media confidence is everything. You can be a great guy, with huge principles and a proven compassionate track record, like David Shearer or Andrew Little, but if you can’t hold your own in the press, you’re toast. Poor Simon even bumbled his way through his final press conference yesterday as he conceded public defeat to an almost complete unknown contender.

Muller’s first speech as National Party leader, in contrast, was confident and measured, he barely fumbled. He touched off all the segments of the constituency who might have been economically affected by Covid-19 –that’s everybody- and in doing so kept the focus on Labour’s portrayed weakness, the economy.  “This election will be about the economy. The economy in your community” he said, “your job, your main street, your marae, your tourism business, your local rugby league club, your local butcher, your kura, your netball courts, your farms, your shops and your families.” There was a nice bit of appeal to local loyalties, the iconic sports communities of interest, the local butcher (suicidal, possibly bankrupt, destroyed by lockdown and supermarket competition?), some tokenism to Maori votes (“your marae and kura”), your farms (National’s core constituency). But these are real people and real issues so ticking them off will push buttons for voters. Muller seems to have a better speech writer than Simon Bridges, even if he’s just out of the same old privileged white male mould.

The appointment of this new National Party leader hasn’t had the same dignity and dynamism as when Andrew Little resigned to allow Jacinda’s ascension. But it has taken the spotlight off Jacinda and Covid-19, so already – even if as a distraction- is having a positive effect for National.

National Party voters who give credit to Jacinda’s Covid-19 management will see their conservative social and economic views reflected in Muller’s opposition to abortion, cannabis and euthanasia, even though Simon Bridges was conservative too. And after Simon Bridges’ bumbling through Covid-19, for some voters leaning toward Labour in recent polls, having a leader who isn’t Bridges, may be enough to pull them back. Strategically, Muller is smart enough also to know that oftentimes the election is so close that it’s Winston Peters, not the voters who determines who forms a Government, and so has not yet ruled him out as a future Coalition ally. Indeed, Tracey Martin today warned that Labour shouldn’t take New Zealand First support for granted.

West Coast MP Maureen Pugh who Simon Bridges famously dismissed in a taped phone call to Jamie-Lee Ross as “fxxken useless”, said she’s pleased to see Todd Muller as leader. She thinks it will be good for the West Coast, with mining and hydro-schemes likely to gain his support unlike under Labour and the Greens. The National Party’s conservative, economy-first policy platform -and workers and environment second- is likely to be consolidated in response to Covid-19, so we should expect renewed positioning in favour of big business and extractive industries from Muller. It may also result in Labour’s conservative guard doubling down on their own positions, and see Damian O’Connor continuing to court rural and remote voters. It’s a constituency that New Zealand First also curries favour with (especially with the Provincial Growth Fund) so there may well be a tight contest for the rural-centre ground.

Meanwhile, on the left, commentators have been dissatisfied with the Budget’s failure to deal with a list of pre-Covid-19 problems made worse by its economic effects. The perceived failures include welfare reform; an absence of a universal basic income and a universal basic services safety net; for dealing with business relief not people; for feeding hungry kids, but doing little for their hungry parents; for abandoning migrant workers; and for failing to have a vision for sustainable post-Covid-19 tourism. There was no empowerment of Maori to foster tino rangatiratanga or kawanatanga, and no prison or welfare reform. The consensus is that while the Budget was sound public administration for the times, in which New Zealand has been fiscally well placed to withstand and respond, it’s a management Budget, not one of leadership, despite the leadership we know Jacinda can show in a crisis.

The Labour Government has had to respond to huge challenges with the coronavirus crisis – but there’s a failure to implement their own plans, and a failure to articulate a ‘big post-Covid-19’ vision. There was no vision for tourism, sustainable transport or regenerative agriculture in face of Covid-19 and climate change.

It’s not a reform Budget. It’s not a transformation or a revolution despite the potential and the promises. Chris Trotter and others say that would be too much to expect – real reform would raise the ire of right wing commentators, and middle ground voters and destroy Labour’s support. But Labour’s election was built on the promise of better, of transformation, of courage – and despite the mandate for change in both popular support and the crisis at hand, it’s an opportunity squandered. This was a budget that deals with economics more than socio-economics. A budget that deals with economics as usual more than political-economic reform. Sadly, it’s not even a well-being budget. In fact well-being is likely to have declined due to Covid-19, and a focus on its equitable attainment is more important than ever. That, seems like a dream of more innocent times.

Todd Muller’s criticism of a lack of skill and depth in Labour’s Cabinet, “Labour’s 17 empty chairs” will resonate with many on the right, and some on the left. And while Jacinda’s visit to empty tourism venues in Rotorua at the end of the week in some ways addresses Kelvin Davis’ weakness and tourism calls for her to become the sector’s Minister, despite her superpowers, she can’t be Minister of Everything.

Grant Robertson delivered his Budget speech with observations on experiencing the economic carnage during the 1980s and ‘90s. A period of economic suffering and ruthless government that many of us recall. However, those who don’t learn from history are doomed to repeat it. Without a big plan to deal with the destabilising effects of existing and increasing inequality and poverty, and the unsustainable impacts of environmental destruction – including biodiversity loss and climate change, whether it’s a Labour or National led Government elected in September, it seems we’re doomed to more of the same. Those who don’t change where they’re heading, end up where they going. Both Labour and National will be concentrating on the economy. But there’s not enough evidence of the investment and the change we need to avoid more poverty, suicide, inequality and social and economic pain.