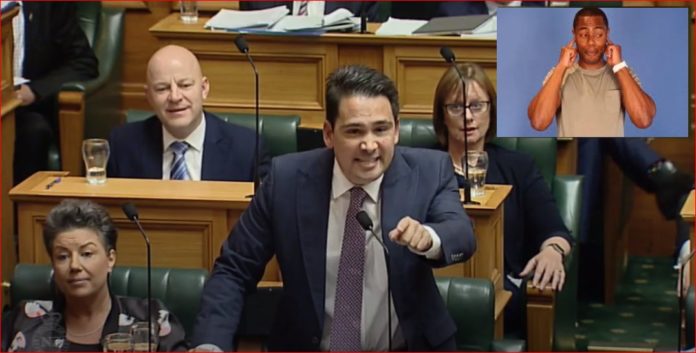 There is tone deaf and then there is Simon Bridges.

National struggled when this pandemic erupted globally. The week before the drastic decision to lockdown the country, Simon and his Finance Spokesperson Paul Goldsmith were holding press conferences bragging about how they were going to set alight a bonfire of red tape.

It went down about as well as Donald Trump at a feminist folk festival.

New Zealander’s were desperately  turning to the State for protection while Simon and his grinning mate were promising to burn the very regulations those panicked Kiwis were trying to shelter under.

National’s small Government mantra was the last thing any Kiwi wanted to hear as they huddled in fear.

This grotesque misreading of the nations mood quickly changed as Simon understood the magnitude of what was happening. From that point on he started playing the role of Opposition Leader responsibly and effectively, he managed to pull out from the purposely obtuse Ministry of Health during the Epidemic Response Committee he chaired that our track-trace-quarantine infrastructure was a farce (sure it was decades of National Party underfunding that ran the Ministry into the ground, but thats a story for another day).

The criticism thrown at him for commuting to Wellington was needless, tribal and spiteful and until yesterday, he was looking responsible and a genuine check and balance to what is effectively a Police State.

National leader Simon Bridges badly misjudged in his response to the lockdown decision, accusing the Government of holding back the country in its testing and tracing failures.

The concerns he raised are legitimate; less so is his desire to lay it at the feet of the current administration and wail as if we were spending another month in solitary confinement.

His pining for an approach closer to that of Australia also rang false, given many experts have said the two countries are more similar than they are different at present (even though you can get a haircut across the ditch).

Bridges would have expected criticism from the Twitterati – but even he may have been taken aback by the torrent of negative remarks on his Facebook page, while not all in his caucus seemed happy with his approach.

…Twitter & the Woke Twitterati don’t mean anything to public opinion (in fact what they are for the rest of NZ is generally aghast at), but Facebook sure as hell does represent middle NZ and the backlash on his page was a fair representation of where the electorate is right now.

Despite the criticisms of the Plan B Death Cult Capitalists, the vast majority of New Zealander’s accept and understand Jacinda’s decision and they are grateful for her leadership. They collectively feel she has led us through this pandemic with grace and real courage, they watch in horror the incompetence of America and the UK and are thankful for her.

We have all just experienced a unique shared sacrifice, Simon’s terribly misjudged criticisms made New Zealander’s feel like he was shitting on their shared sacrifice which is electoral suicide.

He may as well have pissed on an ANZAC grave while screaming ‘war criminals’.

He has misjudged the shared sense of experience in favour of parroting Death Cult Capitalist talking points and in doing so alienated a huge chunk of the voting public who wanted their shared sacrifice to be acknowledged, not written off.

He zigged when he really should have zagged.

Simon has become as welcome as Boris Johnson at a Public Health Conference.