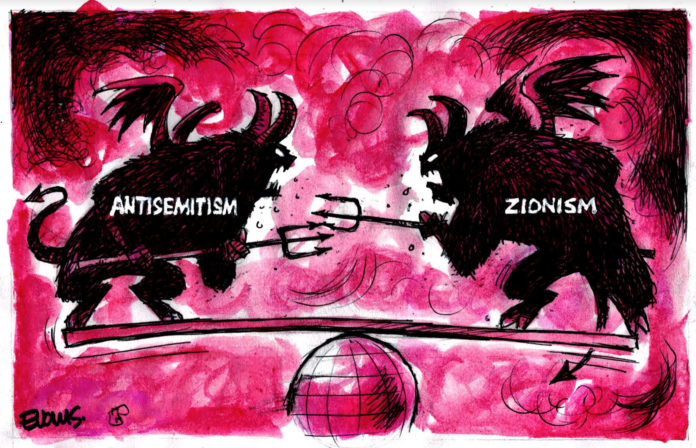 On Saturday the Palestine Solidarity Network Aotearoa wrote to the Wellington City mayor and councillors urging them to withdraw a proposed resolution on anti-semitism which is scheduled to be discussed and voted on at this Wednesday’s council meeting.

This resolution is based on the hugely controversial International Holocaust Remembrance Alliance working definition of anti-semitism.

This definition is being used in many US states, US university campuses and some European countries to attack Palestinian human rights groups and condemn their actions as anti-semitic.

Even the main drafter of the original definition, Kenneth Stern, has said the definition is being misused around the world. He says it was intended as a guideline for researchers and its use in resolutions or legislation – such as the proposed Wellington City resolution – would “…restrict academic freedom and punish political speech”.

It’s clear the mayor and councillors had no idea the history or controversy around this issue. They should have been alerted by council staff but weren’t.

The promotors of this resolution were no doubt hoping it would slip through under the radar but we found out about it hopefully in time to stop its passage.

We want the resolution withdrawn and replaced by a comprehensive resolution which condemns anti-semitism as well as Islamophobia and white supremacism.

It would be far better for Wellington City to pass a comprehensive anti-racism resolution rather than have a divided vote on the proposed “anti-semitism” resolution.

We would welcome the opportunity to work with the New Zealand Jewish Council, Islamic associations and other minority groups to draft such a comprehensive resolution.

The letter we sent to the mayor and councillors is reproduced below.

Re: Proposed resolution on antisemitism

I’m writing on behalf of the Palestine Solidarity Network Aotearoa which advocates for Palestinian human rights and which is also strongly opposed to racism in all its forms – including anti-semitism.

Our members have protested against racist spray-painting attacks on Jewish graves and synagogues just as we have marched in support of the Islamic community after the horrific events of March 15 last year.

However, there are serious problems with the proposed resolution and we are asking that it be withdrawn from the council agenda and replaced by a resolution which condemns all racism such as islamophobia and white supremacism as well as anti-semitism.

The problem with the International Holocaust Remembrance Alliance definition of anti-semitism, which is the focus of the proposed resolution, is its use in many US states and some European countries to claim Palestinian human rights activists are anti-semitic when they call for action against Israel until it complies with international law and United Nations resolutions. It is being used as a weapon to deny free speech and freedom of political action to those standing up for the victims of Israel’s brutal military occupation of Palestine and ongoing theft of Palestinian land.

The IHRA definition was always intended as a guideline for researchers, not as a prescription for a resolution or legislation. The main drafter of the resolution, Kenneth Stern, has cautioned against its use in resolutions or legislation and is quite emphatic that it must not be misused as is proposed in the Wellington City Council resolution.

Here is what he has to say on the IHRA Wikipedia page:

“The main drafter of the working definition and its examples, Kenneth S. Stern, cautioned against the free speech implications of its use as a legal tool.[26] He has opposed efforts to enshrine it in legislation[98] and wrote a letter to members of the US Congress warning that giving the definition legal status would be “unconstitutional and unwise” in December 2016.[99] In 2011, he co-authored an article about how the ‘Working Definition’ was being abused in Title VI cases, because it was being employed in an attempt to “restrict academic freedom and punish political speech.” In November 2017, Stern explained to the US House of Representatives that the definition has been abused on various US university campuses. He warned that it could “restrict academic freedom and punish political speech” and questioned whether definitions created by minority groups should be legislatively enshrined, giving as one of several examples.[26]

“Imagine a definition designed for Palestinians. If “Denying the Jewish people their right to self-determination, and denying Israel the right to exist” is antisemitism, then shouldn’t “Denying the Palestinian people their right to self-determination, and denying Palestine the right to exist” be anti-Palestinianism? Would they then ask administrators to police and possibly punish campus events by pro-Israel groups who oppose the two state solution, or claim the Palestinian people are a myth?”[26]

He states that the definition was created “as a tool for data collectors in European countries to identify what to include and exclude from their reports about antisemitism, and to have a common frame of reference so that data might be compared across borders.”[98] He “encouraged the Department of State’s first Special Envoy for Antisemitism to promote the definition as an important tool.” He used it effectively as the framework for a report on global antisemitism. He added: “approaches to antisemitism that endorse and promote academic freedom are more likely to work, in part because they underscore the academy’s goal of increasing knowledge and promoting critical thinking…. approaches that explain academic freedom away or harm it will not only fail, they make the problem worse.”[26]

We do not want the council to “make the problem worse” and pass a resolution which will be used to attack and demonise those who stand up for international law and United Nations resolutions and work hard for Palestinian human rights.

For example the City Council in Munich, Germany, has used the IHRA definition of anti-semitism to condemn Palestinian activists calling for BDS (Boycott, Divestment and Sanctions) against Israel and have denied the use of city council facilities to Palestinian human rights organisations.

Palestinian activists here in Wellington have already faced attempts by pro-Israeli groups to deny them access to facilities for meetings and events and last year a local school faced a determined attempt to stop me speaking after I had been invited to do so with students at a lunchtime meeting using baseless claims that I was anti-semitic.

These pressures will increase dramatically if this resolution is passed as it is.

Meanwhile Jewish groups in New Zealand and around the world have spoken out strongly against the misuse of the IHRA definition and in 2018 over 40 Jewish groups expressed their support for BDS and attacked attempts to equate calls for boycotts of Israel with anti-semitism.

An open letter from these Jewish groups said in part:

“As social justice organizations from around the world, we write this letter with growing alarm regarding the targeting of organizations that support Palestinian rights in general and the nonviolent Boycott, Divestment and Sanctions (BDS) movement, in particular. These attacks too often take the form of cynical and false accusations of antisemitism that dangerously conflate anti-Jewish racism with opposition to Israel’s policies and system of occupation and apartheid”

Similar sentiments have come from Nobel Peace Prize winner and South African Archbishop Desmond Tutu who says the world should call out Israeli policies towards Palestinians as “apartheid” and implement a boycott of Israel. New Zealand has a proud history of standing up in support of the struggle against South African apartheid and we must do the same against Israeli apartheid.

It is surprising that none of this deep concern and controversy about the misuse of the IHRA definition of anti-semitism was included in the council’s background paper on this resolution. It should have been.

It would be tragic if, on the back of the horrific events of March 15 last year, a resolution was passed by Wellington City Council which will be used to deny freedom of speech to members of the Islamic community in Wellington and New Zealand, some of whom are Palestinians, when they speak out against Israeli apartheid.

It would be a dark day for democracy, free speech and human rights if the resolution is passed as it currently stands. It would put the council on the wrong side of history.

We therefore respectfully request that the resolution be withdrawn.

We would be very happy to work with the Jewish Council, the Islamic community and other minority groups on a resolution which condemns the poison of racism in all its forms and calls for community solidarity as the best way to protect all of us.

In solidarity against racism.