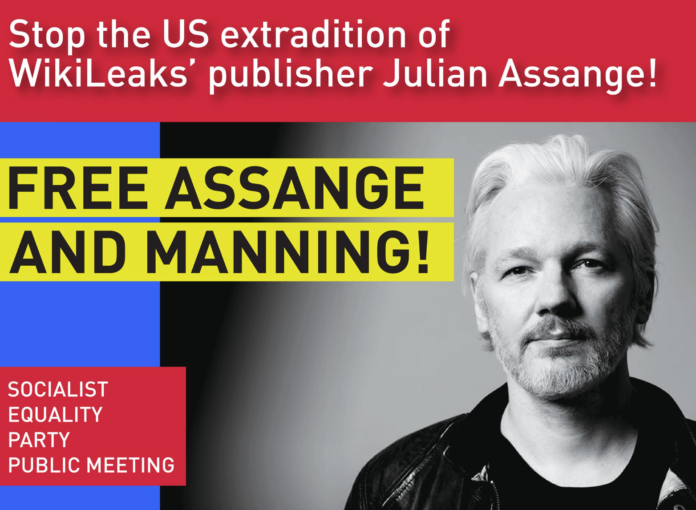 The Trump administration is seeking to extradite Julian Assange, an award-winning Australian journalist and citizen, and put him on trial on multiple charges of espionage. His only alleged crime? In 2010, WikiLeaks published documents leaked by Chelsea Manning that exposed US imperialist war crimes and diplomatic intrigues.

Since being arrested in London in April, Assange has been confined to the maximum-security Belmarsh prison in London ahead of the first extradition hearing on February 25, 2020. He is enduring solitary confinement and harsh conditions. His family and friends fear for his physical and mental health, and even his life.

The American ruling class and its allies are determined to condemn Assange to life imprisonment or worse, in order to terrorise all honest journalists and would-be whistleblowers. For nine years, the US, British and Australian governments, with the shameless support of the media and the establishment political parties and trade unions, have presided over a relentless campaign of persecution. This has involved fabricated allegations of sexual assault and personal slander, conspiracy and spying, and attempts to silence and isolate all those who defend him.

The Socialist Equality Group, the International Youth and Students for Social Equality (IYSSE) and the World Socialist Web Site (WSWS) have sponsored a series of rallies and public meetings to demand that the Australian government uphold its responsibility to one of its citizens. It must use its undeniable diplomatic and legal power to secure Assange’s unconditional freedom and right to return to Australia, with guaranteed protection against any extradition to the US.

The campaign in defence of Assange and Manning has revealed a growing opposition among ordinary people to the treatment of these class war prisoners.

The meeting in Wellington will review the political lessons that must be drawn from the campaign in defence of Assange over the past nine years. The aim of the meetings is to prepare for the political action that must be organised internationally against the legal travesty that is underway in the British courts.

Time is running out! If Assange is extradited to the United States he will face a kangaroo court and incarceration for 175 years. There is no possibility that he will receive a fair trial.

We call on all those who defend democratic rights to take a stand and join the struggle to stop the US extradition of Julian Assange.