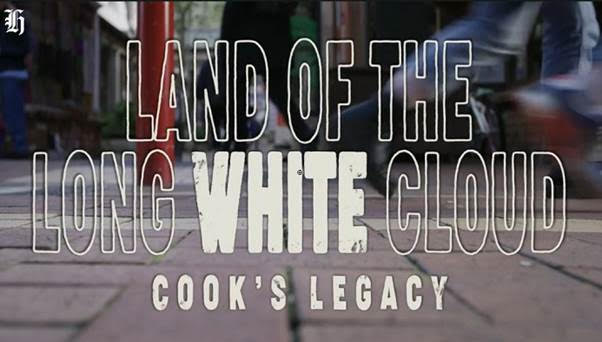 PERHAPS THE BEST WAY to assess the quality of the NZ Herald’s “Land of the Long White Cloud” is by studying Tom Clarke’s characterisation of James Cook. Clarke begins by making Cook a member of the British aristocracy. He gives him the accent of Hugh Laurie’s Bertie Wooster, along with most of his mannerisms. Clarke then proceeds to deliver a false description of Cook’s mission – complete with jokes about planting flags and claiming countries. All done with a smile, of course, in the interests of lightening what the series’ creators clearly believe to be a very serious matter. Even so, if you’re trying to dispel some of the myths surrounding New Zealand’s origins, then falsifying the historical record would seem to be a very peculiar way of going about it.

Because James Cook was not a member of the British aristocracy, he was a plain- speaking Yorkshireman of humble origin. Tom Clarke should, therefore, have based his accent more on the characters of Heartbeat and Last of the Summer Wine than on Jeeves & Wooster. Indeed, had Clarke bothered to read anything written by a reputable historian concerning Cook’s voyage of 1769 (Anne Salmond’s springs to mind) he would have encountered a clever, considered and compassionate man of (for his time) unusually enlightened opinions. Trouble is, satirising that sort of Englishmen would have required more of the actor than he was either able, or permitted, to give.

Clarke’s representation of Cook does, however, speak directly to the profound intellectual weakness at the heart of this so-called documentary about “white guilt”. The expression “begging the question” is often used erroneously to indicate a failure to raise the obvious and most important question/s about an issue. While LOTLWC certainly fits this description, it also conforms to the expression’s classical meaning. LOTLWC begs the question because the conclusion arrived at by the series’ makers – that “whites” are guilty – is derived entirely from their original premise – that “white guilt” exists.

It certainly explains why the makers selected the eight individuals whose opinions constitute the series’ content. Originally pitched to NZ On Air (the series’ principal funder) under the working title “After White Guilt”, the first of the six recorded episodes contains not the slightest hint that attaching the word “guilt” to New Zealanders of European origin might be in any way problematic.

LOTLWC simply assumes that the Pakeha settlement of New Zealand was a crime. (Why else use the word “guilt”?) Accordingly, New Zealand’s colonial history is presented as the work of murderers and plunderers. The descendants of these criminals – the Pakeha New Zealanders of 2019 – find themselves cast in the role of people living off the proceeds of crime: receivers of stolen goods. The suggestion, so far unspoken, but lurking just beneath the surface of the participants’ remarks, is that these crimes must be acknowledged and atoned for, and the stolen property returned to its rightful owners.

One must assume that the participants in and the creators of LOTLWC really are as naïve and innocent of political reality as they appear. To assume otherwise casts them in the role of conscious and deliberate inciters of hatred and division between Pakeha and Maori – to the point of risking full-scale civil war. Nothing in the history of the human species suggests that people can be persuaded to part with their property, or their autonomy, without a fight. Nor does the historical record attest that such wholesale dispossession can be accomplished except in the aftermath of their complete and unalterable defeat.

“But that is exactly what we are saying!”, one can imagine LOTLWC participants expostulating. “That is what our ancestors are guilty of – and we are the beneficiaries of their crimes!”

Except, when viewed in its entirety, the history of human occupation in these islands suggests that what happened between Maori and Pakeha in the middle of the nineteenth century was far from exceptional. For the best part of 500 years, the killing of human-beings and the appropriation of the survivors’ property and autonomy, had been the norm. All the Europeans brought to the game were more effective weapons and superior tools – both of which the Maori acquired and mastered in a very short space of time.

Indeed, what distinguished the 70 years between the arrival of Cook in 1769 and the signing of the Treaty of Waitangi in 1840, was an astonishing escalation in warfare, killing, dispossession and dislocation – not at the hands of the Europeans, but by the indigenous people. When Cook arrived, New Zealand boasted approximately 100,000 inhabitants. By the end of the Musket Wars, in the mid-1830s, between 20,000 to 30,000 Maori had disappeared. The Europeans were impressed, but not surprised, they’d been doing the same things to one another for the best part of 3,000 years!

When the Pakeha settlers finally launched their own war of conquest in the Waikato in 1863, not only could they rely upon the 12,000 soldiers sent from Britain to support the colonial government, but also on the military support of Maori tribes unwilling to turn the clock back to the time before Cook’s arrival. They wagered on their people being strong enough to survive te riri Pakeha, the white man’s anger, and his greed, and they were right. Two-hundred-and-fifty years after Cook’s arrival, the Maori population of New Zealand is five times what it was in 1769. That is not a claim which many of the planet’s indigenous peoples can make – especially those inhabiting its temperate zones.

The brute facts of New Zealand history suggest that if its blame Maori and Pakeha are looking for, then there’s plenty to go around. Rather than apportion guilt, would it not be wiser to accept that the Pakeha of 2019 are not – and never will be – “Europeans”? Just as contemporary Maori are not – and can never be again – the Maori who inhabited these islands before Cook’s arrival. Would it not, therefore, be wiser to accept, finally, that both peoples are victims of historical forces too vast for blame, too permanent for guilt?

Which immediately raises another interesting question: Why NZ On Air felt moved to promise the makers of LOTLWC (aka “After White Guilt”) close to $140,000 of public funding? As already noted, the series is not an exploration of the way in which Pakeha have responded to a dramatic expansion in the range and depth of historical understanding in New Zealand – that would have been a very useful exercise to have supported. It is, instead, the result of taxpayers coughing-up a lot of cash for eight individuals, all subscribing to an extreme and highly tendentious interpretation of New Zealand history, to lecture them on what awful people their ancestors were, and what they should be doing to assuage their “guilt” and off-load their “privilege”.

That $140,000 question deserves an answer, especially given the fact that LOTLWC’s sponsoring institution, the New Zealand Herald, was founded in December 1863, five months after the invasion of the Waikato, for the express purpose of ensuring that the colonial government (also based in Auckland) did everything possible to extinguish the “native rebellion” and seize the “rebels’” lands. In the light of that little snippet of New Zealand history, would it not have been more appropriate for NZME to assuage its “Pakeha Guilt” out of its own pocket?