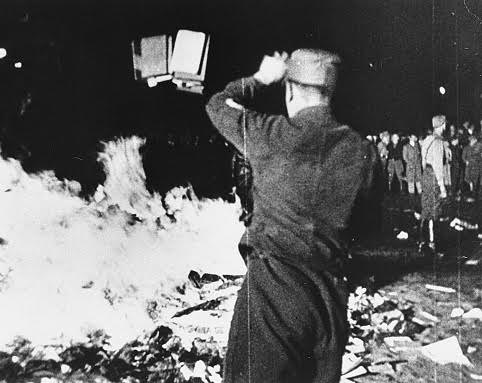 A MURDEROUS, ANTISEMITIC, terrorist attack, live-streamed, in chilling imitation of the Christchurch Massacres, has shocked and dismayed the German nation. Proof, if any was needed, that strict legal prohibitions against the iconography and language of far-right extremism confers no special protection against the deadly designs of its adherents. No country is more assiduous in banning hate speech and Nazi paraphernalia than the German Republic, and yet, the impulse to murder Jews and Muslims has not been thwarted.

Sadly, that is not the lesson which the Censorious Left has been inclined to draw from this latest tragedy. Almost immediately, sophomoric statements appeared on social-media deploying the horror of the attack against the defenders of free speech. These latter were accused of supporting the right of homicidal Nazis to debate their views in the marketplace of ideas. Perhaps intuiting that this accusation was unlikely to be taken seriously, the Censorious Left opted to advance the (marginally) more moderate suggestion that while the philosophies of the Right may not in-and-of-themselves be objectionable, exposing vulnerable individuals to their malign influence under the rubric of free speech would only end with homicidal Nazis shooting up synagogues and mosques.

But, this line of argument leaves the Left as exposed to censorship as the Right. If granting right-wingers a platform is a bad idea because giving free rein to right-wing ideas will only end in murder, massacre and genocide, then granting platforms to the Left must also be forbidden. If the logical terminus of right-wing thought is Auschwitz, then the logical terminus of left-wing thought must be the Gulag. For every Babi Yar advanced by the anti-Nazis, the anti-Communists can produce a Katyn Forest. Clearly, the only sensible solution, if society is to be kept safe from all forms of ideological extremism, is to stop talking about politics altogether!

Except, of course, the Censorious Left has no intention of allowing itself to be silenced. That much was made clear by the 1,300 academic staff and students of the University of Auckland who signed the Open Letter condemning their own Vice-Chancellor’s defence of free speech on campus. As the anonymous author/s of the letter put it:

“If these posters [pasted-up by the ‘radical nationalist’ group calling itself Action Zealandia] constitute ‘free speech’, the same can be said of the actions of individuals who remove those that they encounter.”

Clearly, the person/s who wrote those words is no historian. No one having the slightest acquaintance with modern history would have exposed themselves so completely to the obvious rejoinder that their definition of free speech, if accepted, must render its extinction inevitable. Was it not the very Nazis the Censorious Left purports to condemn who bequeathed the world what is surely the most compelling depiction of intolerance, intellectual aggression and censorship ever recorded on film?

The Säuberung (cleansing by fire) was the work of the German Student Union which, on 10 May 1933, under the watchful eye of the Reichminister for Propaganda, Joseph Goebbels, consigned 25,000 books to the flames in a ritual exorcism of “un-German thought”. Into the bonfire illuminating the square in front of the Berlin Opera House, hundreds of radical nationalist students hurled the works of Jewish, Socialist and Communist authors. As the burning books cast their grotesque shadows over the crowd, horrified foreign journalists recalled the words of the nineteenth century German poet, Heinrich Heine: “Where they burn books, they will too in the end burn people.”

Not that the Censorious Left possesses the slightest grounds for objecting to this infamous historical spectacle. After all, those German students were simply behaving in the way recommended by the author/s of the Open Letter to Vice-Chancellor McCutcheon 86 years later. What else was the Säuberungbut the ritual obliteration of material considered by the staff and students of Germany’s universities to be offensive and harmful to the wellbeing of the German volk? In confronting this “hate speech”, they were guilty of nothing more than exercising – exuberantly and dramatically – their right of free speech!

Perhaps if the Censorious Left knew a little bit more about the tactics of the historical movement they so loudly condemn they would be less inclined to imitate it. Those so outraged by the presence in Auckland of right-wing provocateurs Cheryl Southern and Stefan Molyneux that they were willing to frighten the owners of prospective venues for their public lecture into refusing them access, were clearly ignorant of the fate of the classic anti-war film, All Quiet on the Western Front.

At the film’s Berlin premiere in December 1930, Nazi stormtroopers harangued and jostled the audience as they entered the cinema, released stink-bombs in the auditorium and called-in real bomb threats. Goebbels pledged to do the same in cinemas all over Germany if the film – which the Nazis declared anti-German and offensive to all Great War veterans – was not withdrawn immediately. Terrified cinema-owners, fearful that people and property would be harmed, mostly succumbed to the “thug’s veto”. All Quiet on the Western Front was not scheduled again for general release in Germany until after World War II.

This is how Nazis exercise their freedom of speech.

Perhaps the Censorious Left should heed the advice given by the German philosopher Friedrich Nietzsche:

“He who fights with monsters should look to it that he himself does not become a monster. And if you gaze long into an abyss, the abyss also gazes into you.”