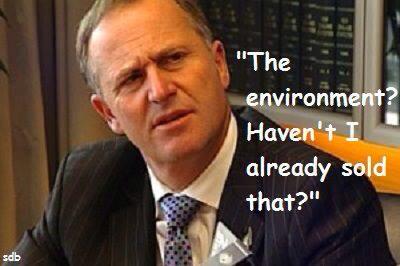 The tribunal released a landmark report tonight into National Freshwater and Geothermal Resources that highlights a series of failures in the Resource Management Act.

“The RMA has allowed a serious degradation of water quality to occur in many ancestral water bodies, which are now in a highly vulnerable state,” he said.

He also said the Act did not provide adequately for the tino rangatiratanga and the kaitiakitanga of iwi and hapū over their freshwater tāonga.

The tribunal is calling for sweeping changes, including recognising Māori proprietary rights.

A lot of confusion and anger about the Waitangi Tribunal on Māori water rights, so let’s just get some clarity on the issue.

2 – Maori had the water appropriated by Pakeha.

3 – Pakeha promptly polluted much of the fresh water for dairy and industrial use.

5 – Privatising and abusing an appropriated public resource means Maori have every right to demand their share.

The myth that no one owns the water was one pushed by National so that their privatisation of hydro could occur when Key was busy selling assets and it also allowed the continued abuse by Dairy to continue.

While China looms as a threat by taking the bottled fresh water that the Dairy Industry doesn’t pollute, it’s time for Pakeha to appreciate that the Treaty of Waitangi actually defends our rights from a rapacious free market that commodifies all our natural resources.

The protection of Māori water rights are a win for every New Zealander.