National MP Matt King has shared the belief that climate change “is natural” after posting a rant, taken from a US far-right source, to his Facebook page on Saturday.

The National MP for Northland attributed his rant to “some words taken from NZCPR website”. The article ‘Setting New Zealand Up to Fail’ was uploaded to the New Zealand Centre for Political Research website last Sunday. It includes an adapted script taken from a 2012 video by Free Market America – but swaps out ‘America’ for New Zealand.

…this is climate denial madness from National… 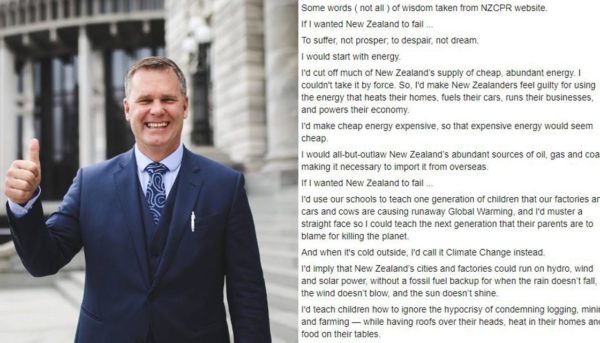 You would’ve thought after the UN conspiracy theory that inspired a white supremacist terrorist, National would shy away from this sort of crank alt-right stuff.

Why rely on overseas crank science when Matt could just invent it himself? Matt doesn’t seem to understand climate science in any way shape or form, and I imagine he gets frightened by eclipses and reading silently without moving his lips.

How does Matt King feel about chemtrails, flat earth and voter fraud?

What he is posting here is real crank science up there with anti fluoridation and anti vaccination stuff. He’s one dinosaur with a saddle away from claiming God made the earth in 6 days.

National have to get much tighter on their MPs social media feeds leading into the election, sure National are a climate denying political party, but you have to pretend to believe the science or else it becomes too obvious to the voting public that you are just paid mouthpieces for big oil and the Dairy industry.

Come on National, pretend better than this.