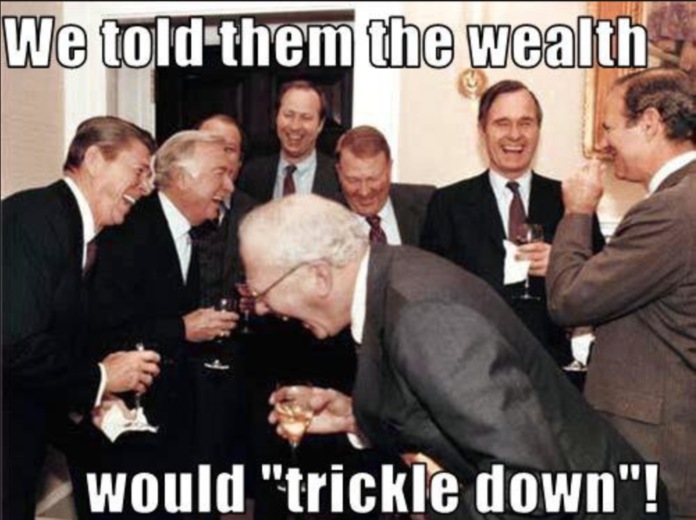 In 1984 when the 4th Labour Government led by David Lange and Finance Minister Roger Douglas came to power and introduced neoliberal economics to our country, I was a teacher.

That’s just one real life measure of what neoliberalism has done to make our lives worse, not better as former Labour finance minister Douglas promised.

Here another. When I was a teacher my salary was roughly equivalent to that of a backbencher. Today backbenchers earn roughly twice as much as a degreed teacher. So they are now up in the top 10% of wage earners and withe xpenses they are doing just fine .

Last week National MP Nathan Guy announced he would retire from politics. He’ll be comfortably off. Apart from his generous parliamentary superannuation The Parliamentary Register of Pecuniary interests shows that he has seven real property interests, and interests in 15 other commercial properties.

He is one of many National MPs who have substantial interests in property
Amy Adams, MP for Selwyn and National’s finance spokesperson, owns three residential properties in Cromwell, West Melton and Wellington, has another two in Templeton and Temuka and owns two areas of bare land in Darfield and Te Kauwhata, as well as a farm property in Aylesbury.

All but 5 of our 120 MPs own property. So there is a broad vested interest in not taxing wealth creation out of property ownership which is why we are not seeing it on the neoliberal agenda of the current government .

Labour will also be aware that National is on 45% in the polls and they are on 44%.

A one percent difference isn’t much, especially when there is not much difference in their economic austerity policies. But what those figures tell you is that the party that owns the most property is still very popular.

The poll figures also tell you that the housing crisis isn’t going to be solved anytime soon as long as property remains the No1 way of accumulating wealth in our country and land prices continue to be pushed up.

The poll figures also explain why Labour is not going to do what is morally right- namely . to distribute the wealth of the nation for the benefit of the many and not the few .

Those who say the current government is more caring than the last I say look beyond the warm fuzzy rhetoric . The low income inmates of our economic prison may have been given slightly softer mattresses to lie on but they are not going to escape economic bondage to own their own shelter anytime soon.

Because, at the risk again of repeating myself, you cannot fund the politics of well-being with the economics of selfishness.