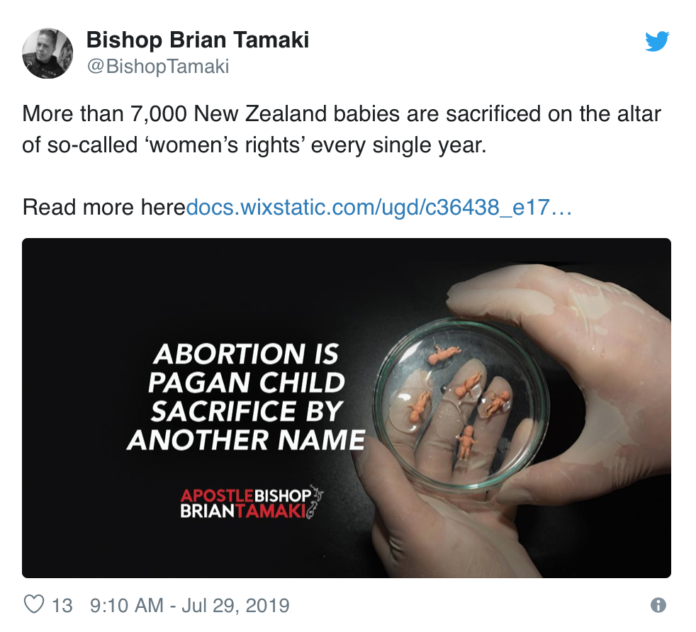 Brian Tamaki, whose wife Hannah is running for Parliament, has blamed abortion on “demonic forces”, calling the medical procedure “Satan’s attempt to kill God in effigy” and “premeditated murder”.

In a statement posted to his official Twitter account, the head of Destiny Church compared it to the Holocaust, in which around 6 million Jewish people were systematically slaughtered by the Nazis.

“Abortion is none other than the savage pagan practises of baby sacrifice described in [the Bible],” the self-appointed ‘Apostle’ wrote.

“This is human sacrifice to demons… a demonic genocide. It is an act of child sacrifice to the postmodern radical left’s demons of convenience”.

…the hot mess that is Brian Bishop’s attempt at cultural relevance by launching a political party continues to get hotter and messier.

Brothers and sisters, I’m pretty old fashioned when it comes to abortion rights. Would I, as a male, accept some bullshit grovelling process where I have to beg 2 doctors to give me a medical procedure because I’m mentally frail?

No. No I would not accept that ridiculous process. If I want/need a medical procedure, GIVE ME THAT MEDICAL PROCEDURE. End. Of. Story.

If a woman, after consulting with her Dr, decides that she wants an abortion – she should be allowed to get that damned abortion with none of this moralistic shaming crap and certainly at no cost to her.

Blah blah blah – it’s a human life – blah blah blah, no it’s not. It is about as much a human life as sperm in my balls or an egg in the ovaries, while the fertilisation process has occurred, this is all proto-life, not a human being, so let’s all hop off the moral high horse now shall we?

I’m very liberal on this folks. Forget the need being rape or incest or some genetic deformity, those are mercy decisions as far as I’m concerned, if a woman simply decides she doesn’t want it, that’s a good enough threshold for me.

So enter stage right the Bish with his description of abortion as a Pagan child sacrifice.

Ok, if the Bish wants to make this a weird religious thing, let’s dance. Wasn’t the Bish only recently defending Folau’s right to offend everyone with his ridiculous list of people destined for damnation on the grounds of religious freedoms?

Well, as a Pagan (I’ve just converted for the purpose of this blog), my religious rights to sacrifice proto-childs should be guaranteed under law!

Don’t discriminate against my religion please Bishop Tamaki, if, as a Pagan, I wish to sacrifice proto-children then I should be allowed to!

You preach your truth, I’ll stick to mine thanks Bish.

Pagan child sacrifice indeed. If the Coalition Party get over 1% in the Polls on election day it will be a sad indictment on the public education system of this country.