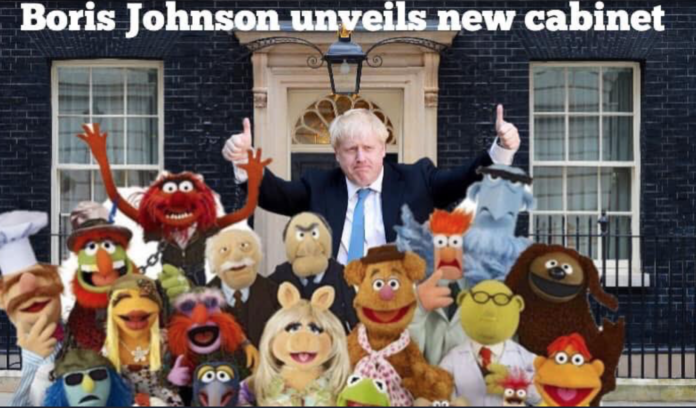 Went through thousands of configurations of TRUMP and BORIS until I found this anagram, which seems appropriate as a description of the style of both these awful men – MOP up the messes (largely by shoving them under the carpet), RUB errr… ladies and STIR everything to the max.

The elevation of Boris de buffoon to the Prime Ministership of the United Kingdom was not a surprise, but nevertheless is pretty hard to swallow. I was on a conference call with people from both the affected countries the other day, both begging me to lend them Jacinda to sort out their problems. And I must say that I would rather be us than them.

Neo-liberal policies brought these men to their positions, which brings its own issues. I am not sure if they are both in the top 1% globally income-wise, but they are certainly FOR that group which, as we know, owns more than half the world’s wealth and is getting madly richer by the day.

The outcome of the outrageous profit-taking is of course massive disruption of lives and poverty in affected regions, leading to huge numbers of refugees and regional diaspora.  The second leg of global neo-liberalism is therefore to prevent displaced persons from reaching anywhere where they might once again take a share of the world’s wealth. This explains why Brexit and wall-building are the primo policies of the two yellow-headed monsters.

Another aspect of neo-liberal formations is hierarchy.  You need disciplined hierarchies to ensure order. These hierarchies are both patriarchal (by this I mean generally in favour of men as leaders and women as followers – such positions can be articulated by women as well as men) and also, certainly in terms of the UK, colonialist.

Thus, it was not surprising to hear Boris wanting to put the ‘Great’ in Great Britain once again, meaning wealth, of course, and the quickest way to wealth is through the old colonial structures, where it is easy to expropriate resources in the name of the Queen.

But the second form of patriarchy is the subjugation of women. There is nothing new about this, nor the establishment’s willingness to disbelieve women.  It is not a neo-liberal disease, but a kind of holy writ where these men “grab pussy” (in Trump’s immortal words) at will and get away with it. So we are left with the irony of the rise of the Me Too movement simultaneously with the leadership of leaders who treat women dreadfully.

So welcome to an increasingly fractious present.  I think it is now obvious that Trump is not just a blip on the horizon, but he and his kind are one part of the future.  And the implication of this is that we need to look at our foreign policy with new eyes. We are not just to be tolerating these people until they are replaced by les autres, but we need to deal with them as they are.

And they are awful and have brought awful people in with them.  Trump’s replacing of the whole Washington establishment with men of terrible beliefs (dreadful people, extremely right wing, extremely misogynist) is now matched by Boris elevating people like Rees-Mogg, and the rest of his right wing cabinet, to power. He not only wants his commas in the right place (not before and, of course) but is against abortion even after rape.  Oh, we are headed for terrible, terrible times.

I am going over to England for a conference in a couple of weeks. I have my “WHAT HAVE YOU DONE?” T-Shirts ready to wear, not to mention ‘WOMEN AGAINST THEM” and “BAD TIMES ARE HERE”.  You know, nice subtle messages. I am thinking of printing THAT photo of Jacinda (looking like a saint) on a shirt with a pithy message (I can’t decide between “she’s ours – you can’t have her” and “good PM available to borrow for those with strong need”).

Because things are a mess.  Trump does enable white supremacist/ eugenics thinking. Women will have to carefully articulate their fight for equality.  And all of us will have to remember our wealth is being sucked out into the portfolios of the very rich. The bottom 90% of New Zealanders are worse off than 30 years ago.  Only the top 1% are actually better off. New Zealand needs to protect itself against the ongoing ravages of the neo-lib world.

There is still hope. Boris may fail to get a Brexit people can live with and may have to go to the polls and the socialist Jeremy Corbyn may be elected by October (see, no commas before ands). And Trump may be a one-term wonder, to be replaced by someone of integrity and good values. Hope is a great human thing (actually, all animals have built in hope machines). There is still hope….