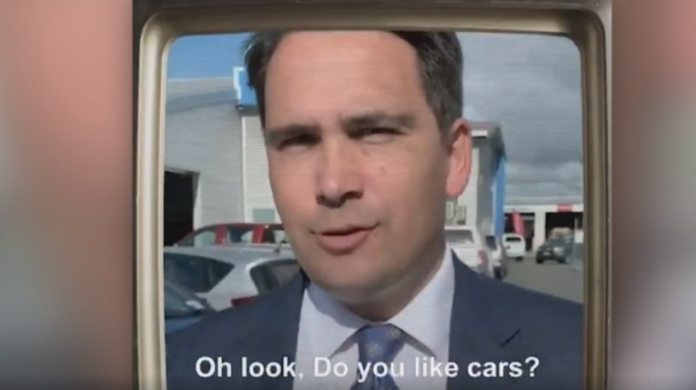 “CLASSIST BULLSHIT!”, was the tweeted response of one Green Party supporter. It was a sentiment shared by enough of the Greens’ electoral base to convince James Shaw to act. Within hours of the Green Party’s anti-National attack ad going up, it was taken down. Mocking the Leader of the Opposition’s broad Kiwi accent was unacceptable – even in the cause of fighting Climate Change.

On the face of it, the reaction of the Greens’ support base is a welcome confirmation that it still believes the Greens should keep well away from “dirty politics”. Attack advertising, according to these principled folk, is a foul form of political communication, best left to the hack parties of the centre-left and right.

From those who decried the ad, the challenge is as brutal as it is simple: Would the Greens’ campaign team have produced an attack ad making fun of a National Party MP from China or India who spoke English with a pronounced accent?

We all know the answer to that. To even suggest releasing an ad built around such an obvious racial slur would be a sacking offence in the 2019 Green Party apparatus. But, if using race in your party’s propaganda is utterly verboten, why is it permissible to use class? What does it say about the people who produced and approved the offending Green Party ad, that the decision to satirise Simon Bridges’ working-class accent set off no alarm-bells?

Is it because making fun of the cultural markers of working-class people is still not seen as an act of unforgiveable prejudice? And, if that is true, then why is it true? Drawing attention to the cultural markers of non-white ethnicity – especially for the purposes of ridicule – was long ago, and quite correctly, deemed racist. Why aren’t the injuries of class similarly condemned?

Answering that question leads us straight down a very deep, and very strange, rabbit-hole.

Twenty-first century New Zealanders are constantly reassuring themselves that their society is a meritocracy. If they apply themselves and acquire the right skills, then there is nothing to prevent them from rising to the very top of the social totem pole. By the same token: if they refuse to work hard and improve themselves, then they cannot expect to rise very high at all. Indeed, laziness and a lack of self-discipline can cause a person to fall deeper and deeper into material and moral poverty. The logic of meritocracy is unforgiving. If you have risen high in society, it’s because you have merit. If you have failed to rise, or, worse still, fallen, it’s because you lack merit. In a meritocracy, success and failure are both self-inflicted conditions.

Small wonder that meritocracy and neoliberalism have become inseparable. If people’s misfortunes are self-inflicted, then the state’s only responsibility towards the poor and marginalised is to provide them with the minimum sustenance required to prevent them from disturbing the peace (and/or threatening the property) of their more diligent neighbours. That word “minimum” is important. If the state were to become excessively generous, then meritorious behaviour would cease to be its own reward, and meritocracy, as a system for rewarding human striving, would collapse.

Accent, as the playwright George Bernard Shaw pointed out, plays a crucial role in identifying merit. In the words of Professor Higgins in Pygmalion:

“The English have no respect for their language, and will not teach their children to speak it. They cannot spell it because they have nothing to spell it with but an old foreign alphabet of which only the consonants – and not all of them – have any agreed speech value. Consequently no man can teach himself what it should sound like from reading it; and it is impossible for an Englishman to open his mouth without making some other Englishman despise him.”

In twenty-first century politics, accent has become an indispensable marker of merit. Far more than was the case in the nineteenth and twentieth centuries, how we speak confers upon us the right to speak. In the early decades of the democratic age, the humbug of meritocracy was not yet in evidence. (Although its religious progenitor, Protestantism, certainly played an analogous role in justifying the ways of the rich to the poor.) The poor, themselves, were in no doubt as to why they lived such harsh lives. It was because the rich forced them to. In the heroic phase of democracy, it was certainly no disgrace for a working-class politician to address his followers in the accents of their common condition.

In democracy’s decadent phase, however, these class markers serve a less positive function. A working-class person who has succeeded in the fields of entertainment, sport and (certain types of) business may retain his or her accent without incurring too much social disdain. But a politician who refuses to speak in the accents of someone deserving of respect, should not expect to get very much of it. It is no accident that the two most successful populists of the English-speaking world, Donald Trump and Boris Johnson, both speak in the accents of the ruling-class. How they speak to their followers tells them as much about their heroes as what they say – perhaps more.

In the crudest possible terms: losers do not want to be wooed by losers; they want to be seduced by someone in the accents of a winner.

That’s why so many middle-class people are happy to make fun of Simon Bridges accent. His failure to teach himself how to speak “properly” is seen as a failure to appreciate what is required of someone aspiring to the office of prime minister. Someone born in China or India who has, nevertheless, mastered the language of their adopted country is, by contrast, seen as a person to be admired. Making fun of their accent represents a failure to recognise their true merit. It is the behaviour of someone who does not understand how twenty-first century meritocracy works; someone still mired in the nineteenth and twentieth century fallacy that ethnicity, in and of itself, confers merit. Yesterday’s ideology, for yesterday’s failures.

While capitalism endures, it will always be open season on the working class – even its accent. “Classist bullshit” it may be – but it works.