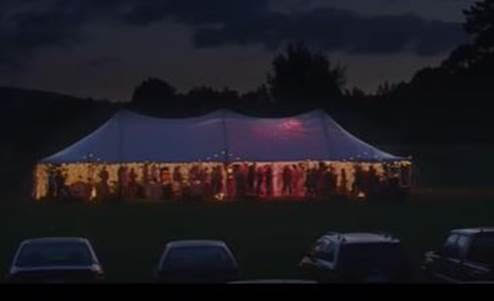 “CITY AIR MAKES you free.” Or, in the original German, Stadtluft macht frei, refers to the early-medieval Germanic tradition that a serf who escaped his feudal master, took refuge in town or city, and manged to live there unclaimed for a year-and-a-day, became a free man. While this arrangement obviously suited the serf in question, it was also, arguably, a boon for the Lord of the Manor. After all, the sort of man (there is no tradition of women being included in this arrangement) bold enough to make his escape from lord, family and friends, and seek his fortune within the walls of town or city, was likely not the sort of troublemaker a medieval potentate would want in his village, filling the heads of his dependents with the dangerous notion of personal liberty. All-in-all, it is possible to represent this tradition as being beneficial to both town and country.

The notion that cities are inherently more likely to produce socially tolerant and politically energetic citizens is not only an old one, it’s a true one. It is certainly the case that, ever since the industrial revolution of the late-eighteenth century, the great manufacturing hubs of Europe and North America have proved fertile breeding-grounds for all manner of liberal and left-wing ideologies. Indeed, without the growth of the urban proletariat, so beloved of Frederich Engels and Karl Marx, socialism would have had nothing to work with.

By the same token, country dwellers, and the small towns that gathered-in their produce and catered to their needs, have always been represented as bastions of tradition and seedbeds of political conservatism. It was here, in the “shires” of England, that “Toryism” sank down its deepest roots. Ditto, the Republican Party of the United States: quintessentially the party of that part of rural and small town America located north of the Mason-Dixon Line. Unsurprisingly, these parties, dedicated to the preservation of traditional hierarchies and the nurturing of established institutions, have tended to be the ones which their state’s electoral systems strongly favoured.

The First-Past-The-Post electoral system (FPP) was particularly notorious for advantaging the rural and small-town electorates over those of the major cities. Urban electorates might rack-up massive majorities for the candidates of the Left, but, in the countryside, with its sprawling electoral boundaries and considerably fewer concentrations of urban voters, it was a very different story. The Right typically won these “marginal” seats with smaller majorities than their left-wing rivals in the big cities, but in numbers often wildly disproportionate to their party’s overall share of the popular vote. Thanks to FPP, a right-wing party’s two-fifths of the votes cast could easily be transmuted into three-fifths of the parliamentary seats.

New Zealand’s political tradition in relation to urban voters is very different from that of the medieval German serf. In this country, city air was not deemed to make you free; it was said to make you bad. Though a clear majority of New Zealanders have lived in towns and cities for most of the nation’s brief history, the governing elites – both rural and urban – have tended to locate virtue in its rural population, and vice in the teeming streets of its unruly cities.

This ‘rural virtue/urban vice’ dichotomy persists – even to the present day. Speights Breweries (owned by the Japanese) has led the way in this regard: contrasting the stoical and reliable inhabitants of rural New Zealand – “Southern Man” – with the superficial and acquisitive inhabitants of the big cities – especially Auckland. The latest Speights ad, in which a bunch of rugged rural workers teach their awkward mate to dance like the big city-slickers is a bona-fide classic of the genre.

This myth of the “real” New Zealand being something inherently and mysteriously rural explains a lot more than the enduring popularity of “Country Calendar”. In its political guise it is actually extremely damaging to the interests of the urban poor. New Zealand’s urban geography ruthlessly separates the virtuous middle-classes in their “leafy” – i.e. fake rural – suburbs, from the vice-ridden and environmentally blighted neighbourhoods of the dangerous underclasses. In effect, the rural/urban divide, with all its prejudices and adverse moral judgements, has been symbolically replicatedwithin the urban boundary.

It is this withering political alchemy which explains why even the demise of the FPP electoral system, and its replacement with proportional representation, has failed to break the peculiar hold which traditional and deeply conservative ideas continue to exert over very close to half the voting public.

It also explains much of the hostility towards fundamentally important urban issues such as public transport, which is represented by the Mike Hoskings and John Roughans of this world as a form of socialist constriction. What’s needed are roads and motorways, so that the virtuous citizen, free to roam in his car, can locate himself as far from the cities’ morally-suspect lower orders as possible.

The pervasiveness of the rural virtue/urban vice myth similarly explains the widespread refusal of the Right to accept the reality and urgency of climate change. The countryside cannot be disentangled from the extractive and environmentally unsustainable industries it supports. But, accepting this fact means casting rural New Zealand in the role of ecological villain, rather than economic and cultural hero. Unacceptable.

We should not be surprised. Stadtluft macht frei, itself, came to an abrupt end in the thirteenth century when the feudal lords decided that too many of their serfs were seeking, and receiving, freedom in the independent cities of the Holy Roman Empire (Germany). According to the honestly-titled “Statute In Favour of the Princes” of 1232, “cities under royal jurisdiction were forbidden to protect serfs originally owned by the regional princes or their vassals”.

Eight centuries may separate the rulers of New Zealand from those favoured German princes, but the threat which cities pose to the “natural” order of things remains clear. Energetic, diverse, innovative, and creative: the city, in whose absence the word “civilisation” loses all meaning, has, throughout history, refashioned human-beings into something new; something dangerous; something free.

Which, for the powerful, rural and urban, can only ever mean – something bad.