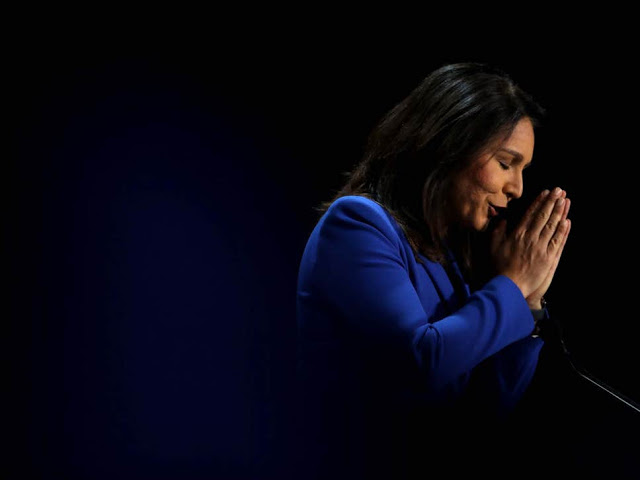 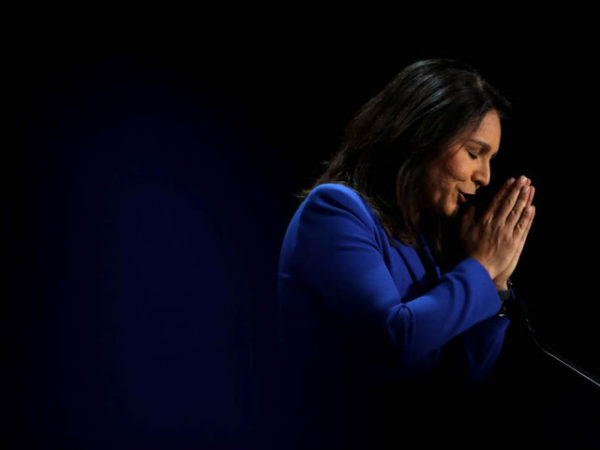 It has been said by political minds far more astute than my own [read: pretty much every candidate going into today’s 1st Democratic Primary debate] that a ‘win’ here is securing ‘cut-through’. Standing out from amidst the crowded, twenty-candidate field and managing to reach out through the television-camera’s silvery lense to make that all-important connection with the ordinary American voter on the other side of the screen.

Now, before this debate had even begun, there were several clear ‘favourites’ amidst the DNC’s 2019 stable; figures who were supposed to make that all-important salience. And, due to a microphone-gaffe part-way through, it now seems like the DNC is once more prepared to help ‘guide’ attention towards their ‘designated winners’. Nothing new there, then.

But here’s the thing. Even though the questions, the moderation, and the overarching tactical terrain were arrayed against her from well before the start … Tulsi Gabbard looks like she’s managed to make a positive impact, a splash. Below, we’ve got search analytics data for the Congresswoman both during and after the debate. I’ve also seen immediate post-match polling which has Gabbard a clear ‘winner’ – in fact, the clear Winner – edging out even predicted ‘people’s-choice-but-establishment-bete-noir’ Elizabeth Warren.

What’s even more interesting – to me, anyway – is the seeming dysjunction between some of the immediate reception which Gabbard and her points received in the room itself versus out there in broader America. I mean, apart from a few loud positive responses from some in the physical audience, her military background and her opposition to continued American imperialist adventurism … did not find fecund soil with those in attendance. At one point, the moderators deliberately attempted to stop Gabbard from speaking about Saudi Arabia and its role in financing terrorism.

Yet out there in ‘broader America’ beyond the room, which is not so easily impressed by a field of candidates falling over each other to push forward a ‘united front’ of ‘Democratic National Consensus’ on various policy positions, or compete over who can gesticulate the loudest about this or that minority demographic, Gabbard’s views and background appear to have found considerable purchase. Turning her, in the span of a few hours, from somebody who’s been almost deliberately ignored in just about any mainstream media reporting of the Democratic Primary – through to a figure of emerging prominence.

She may not – not yet, anyway – be quite a “household name”; but it seems like a lot of households are, indeed, googling her. 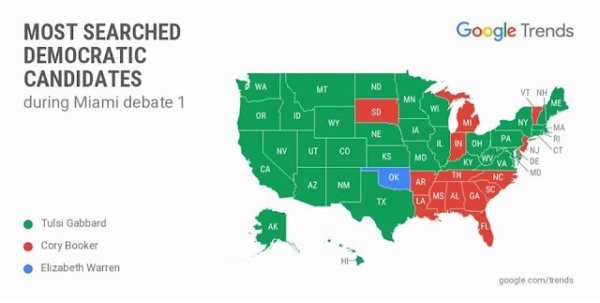 The importance of this also lies in Gabbard’s ability to ‘reach across the aisle’, out beyond the Democrats’ preferred ‘safe’ voter-base, to those who are leery of the party and may even have voted for Trump at the last Election. Not by engaging in some sort of social-media slanging-match race to the bottom in the manner that Trump successfully trounced the 2016 Republican Primary field .. but by resonating with the strong regard that many middle-of-the-road American voters have for authenticity, military service, and anti-interventionist foreign policy (particularly when said ‘Adventurism’ just means more body-bags and far less federal spending turning up in their local community, in service of some fundamentally nasty foreign regimes who don’t seem to wish America anything but ill).

As a brief aside, I am genuinely of the opinion that it was Trump’s perceived anti-interventionist stance which won him the 2016 Presidential Election – flipping key counties in Ohio, and winning over thousands of voters in the communities that have borne the [domestic] human cost of the previous decade and a half worth of Neocon-ism-in-overdrive via being major military recruitment hotspots etc.

Hence the significant importance of Gabbard’s stances – but also personal record of service, which gives her vitally needed credibility when speaking against ongoing military quagmire-ism – in these areas; especially when held up against a Democratic ‘establishment plus’ field which looks increasingly interested in navel-gazing and ‘turning inward’ to focus on shoring up its own base against any potential ‘contagion’ of ‘further-left’ sentiment a la Sanders 2015-16, or AoC et co last year.

Now, it’s true that this debate was not an ideal performance from Gabbard. She displayed hints of anxiety, and more worryingly, in the first half of proceedings was far too ‘polite’ I suppose you might say – not creating the opportunities for herself by shouldering aside others, and instead waiting to be called upon to speak. That’s courteous, and it’s no doubt borne out of an underlying attitude towards others, even adversaries, which is built upon the principle of respect … but this is politics, and up against a potentially rigged system with pre-picked ‘favourites’ who’re designated to get more of the air-time and less-trappy questions, such considerations must by necessity fall by the wayside.

Fortunately, Gabbard improved on these scores over the course of proceedings; and I have every confidence that she’ll continue to grow and shine more with further experience, practice, and exposure.

As applies the ‘anxiety’ dimension … this is actually not nearly as hazardous as it might first appear. Various politico-psychological analyses have demonstrated time and time again that ordinary American voters like seeing something of themselves in their presumptive representatives. Hence, when George W. Bush botched his lines and came across as less sophisticated, less intelligent … less know-it-all and slickly “polished”, you might say … than Al Gore in 2000, a lot of Americans actually decided they liked him more as a consequent result!

Coming across as more ‘human’, as displaying shades of some authentically real traits which we can empathize with, makes us more likely to both subconsciously and intentionally choose to support a leader.

So in other words, especially considering her continued blossoming through the course of this debate, even one of her more noticeable ‘weaknesses’ is actually a reasonable potential strength.

Going into this debate, myself, I had relatively low expectations for Gabbard’s positive outcomes. I figured she might manage to get in a few good hits on her core campaign theme, maybe boost her polling up to the high-end of the single figures, and breath some much-needed ‘life’ into her ongoing prospects for the next phases of the race.

‘Breathe life’, she has indeed managed to do! In point of fact, I’m pretty blown away by the actual immediate outcomes of this debate. Fighting in decidedly unfriendly terrain, she’s managed to get a sweeping salient of that absolutely vital ‘momentum’ going. People excitedly talking about her, looking into her, and then going back to talk about her some more armed with fresh insight and information into who she is and how she measures up as compared to the rest of the Democratic field.

The Media and no doubt the DNC shall continue to try to find ways to do so, no doubt – but for the American voter [although this is not necessarily the same species in all particulars as the [Democratic] Primary voter], it shall be increasingly hard to overlook, much less outright ignore Tulsi Gabbard from here on in!

HAVE WE STARTED THE HAVAN?