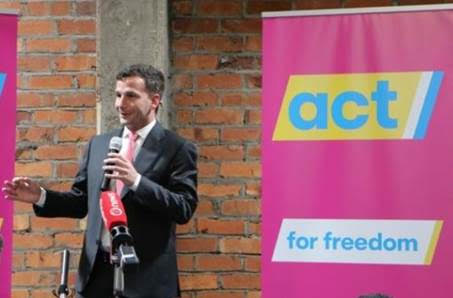 ACT, AND DAVID SEYMOUR, have foolishly mismanaged what could have been a highly effective party re-launch. I say “foolishly”, but that may be unfair. Act’s members and supporters are so fixated on the party’s low-tax, deregulatory, and anti-collectivist mission that the possibilities of the present political moment appear to have passed them by.

Yes, they appear to have grasped the potency of the Freedom of Expression issue; but their politically ham-fisted policies – scrapping the Human Rights Commission – have gifted their electoral enemies with an unmissable target. It is passing strange that the people who beamed in the increasingly frail Richard Prebble to open the “Re-Act” conference, proceeded to ignore his lessons on how to make a party like Act electable.

When Roger Douglas and Derek Quigley launched the ACT Party in 1994, they were convinced that if the New Zealand voters were given the chance to hear about its policies from the horse’s mouth, then they would embrace the party wholeheartedly and it would very quickly make it the dominant force in New Zealand politics. To this end, Douglas called in his IOU’s from New Zealand’s big business-owners and got permission to address their employees directly.

Up and down the country went Douglas and Quigley, addressing large gatherings of both white and blue-collar workers. Underwritten by millionaire businessman, Craig Heatley, they ran dozens of newspaper ads and distributed hundreds-of-thousands of expensively produced pamphlets. All to no avail. Douglas and Quigley were peddling a political product that almost nobody wanted to buy. In spite of the more than one million dollars spent on introducing ACT to the New Zealand electorate, its support never climbed much above 1 percent in the polls.

Enter, Richard Prebble. If Roger Douglas was the “Rogernomics Revolution’s” Lenin, then Richard Prebble was its Stalin. He understood, as Douglas did not, that ACT’s ideas needed to be brought into the New Zealand political landscape heavily disguised in the vestments of right-wing populism. Neoliberalism would have to be smuggled into the country in the same way that Springfield rifles were smuggled into the territory of the Cheyenne, Lakota and Arapaho: in the false bottom of a snake-oil salesman’s wagon, tricked-out with all manner of diversionary patent remedies and magic elixirs.

If the punters were unwilling to endorse lowering the wealthy’s taxes, then offer them the chance to get rid of the Treaty of Waitangi. Why bore them with lectures about the perils of heavy-handed regulation, when you could arouse their bloodlust with all manner of tales about out-of-control criminals and prisons run like holiday homes? How many laughs are there in policies designed to eliminate the welfare state? Nowhere near as many as there are in pillorying politically correct feminists and putting the boot into tree-hugging conservationists.

In 1996, with Prebble in charge, ACT easily cleared the 5 percent MMP threshold. Six years later, in the 2002 general election, the party peaked, with  7.1 percent of the Party Vote and 9 parliamentary seats. Then, in 2004, for reasons that have never been satisfactorily explained, ACT lost Prebble and began its long, slow, slide towards electoral extinction. Rodney Hide fought a gallant rear-guard action until he, too, was eased out of the leadership. After that ACT was transformed into a National Party plaything; gifted the seat of Epsom in the vain expectation that, one day, it might return something more than John Key’s original investment.

But, what goes around comes around. As the current ACT leader, David Seymour, has observed – albeit rather indistinctly – there is a growing market for a distinctly twenty-first century variety of right-wing populism. Could it be time to refurbish the wagon of Dr Prebble’s Travelling Medicine Show?

That’s a very dangerous question. As right-wing populist varieties go, this latest one is particularly toxic. Premised on the racial superiority of the European peoples, it is determined to drive from their midst the non-European immigrant communities it blames for the socio-economic decline of formerly dominant ethno-cultural groups – especially white males.

In order to proselytise effectively, this ideological concoction, essentially indistinguishable from fascism, relies for its protection on the principle of freedom of expression. Seymour gets this. He sees the “new intolerant left” gearing up to fight the latest iteration of the old fascist foe, and the classical liberal in him is, at once, appalled and intrigued by the possibilities which such a feral ideological encounter might throw up. Naturally, he and ACT are foreswearing fascism in favour of freedom. But, for this new breed of right-wing populist, Seymour’s party must, surely, realise that, with “race enemies” to be fought, these two “F-Words” have a way of bleeding into one another.

But, if Seymour and his colleagues have (perhaps unconsciously) grasped the multiple political implications of declaring ACT to be “The Freedom Party”, they have clearly not grasped the fundamental incompatibility of neoliberalism with the populist zeitgeist they are so clearly hoping to exploit.

Building mass support in 2019-20 is all about pitting oneself and one’s party against the “elites” and the impermeable “Establishment” those elites are pledged to defend. Seymour appears to believe that he can offer the right-wing populists the protection they need from New Left “intolerance” while, in the same breath, promising “the big end of town” the gift of tax cuts and a permanent deregulatory crusade.

That simply will not fly. Neither will the spectacle of a populist “freedom party”, campaigning against the corrupt political compromises of the centre-left and the centre-right, relying for its parliamentary survival upon the grace-and-favour of the very elites it purports to condemn. Right-wing populists may be deplorable, but they are plenty smart enough to spot a phony when they see one.

Twerking looks sexy when Miley Cyrus does it. Not so much when the twerker is David Seymour. If the ACT leader intends to learn the moves of a right-wing populist, then he  had better dismiss his National Party dance-instructors.

If you are hoping to win the right-wing populist vote, David, then you’re going to have to reach out to new – and much less forgiving – teachers.