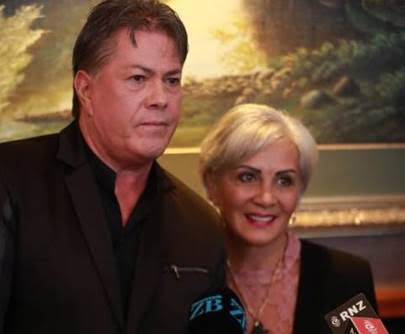 WHAT ARE THE TAMAKIS trying to do? Is the “Coalition Party” a serious political project? Or, is it merely another example of the flim-flam for which religious hucksters the world over are notorious? Certainly, Brian and Hannah Tamaki would not be the first evangelical religious pairing to enlist the aid of politics when too many of the seats in their expensive megachurches remain unoccupied.

Even the new party’s name – The Coalition Party – has a flim-flammy ring to it. Coalition of what? Coalition with whom? Nothing we have heard from Brian or Hannah has been helpful in this respect. All we have been told is that the people of New Zealand have had enough. That the political status quo is no longer to their taste. That they are ready for someone to acknowledge their gutsfullness and offer them a heapin’ helpin’ of politics the way they want it.

But what do they want? That’s the question that the Coalition Party has yet to answer.

For a couple of days it looked as though Hannah Tamaki was preparing to place herself at the head of the movement against abortion law reform. Given the deeply conservative social character of Brian Tamaki’s “Dominionist” theology, opposing the Coalition Government’s moves towards decriminalising and (hopefully) liberalising New Zealand’s abortion laws would make perfect sense. And yet, in spite of Hannah’s early reference to “they” wanting to legalise “late-term” abortions, the issue was allowed to slip quietly off the Coalition Party’s agenda.

What about LGBTQI+ rights? For many years, Brian Tamaki has been an outspoken critic of rainbow politics – even, on one memorable occasion, characterising the Christchurch Earthquake as the earth “groaning” under the weight of the LGBTQI+ community’s unrepentant sinfulness. Here, surely, was a constellation of social issues ripe for the Coalition Party’s political exploitation?

But that was when everything turned decidedly strange. Rather than renew his condemnations of LGBTQI+ sinfulness, Brian reached out to the rainbow community. They were invited to join him and the other members of the Destiny Church in a service of mutual forgiveness and reconciliation.

Understandably, a great many members of the rainbow community were unconvinced. Some, suspecting they were being roped into a political stunt, urged a boycott. Could a preacher as historically hostile to non-cis lifestyles as Brian Tamaki: a veritable leopard in the long grass of social intolerance; really change his spots? Most of those gathered under the rainbow’s arc thought not. Even after the Brylcreemed Bishop delivered what sounded like an apology for his previous anti-LGBTQI+ outbursts, their scepticism remained strong. The handful of rainbow activists who had accepted Tamaki’s invitation were subjected to fierce criticism. The fruits of Brian’s outreach appeared to be rancour and division across the rainbow community.

Perhaps that was its purpose?

Whatever Brian was trying to achieve, his wife, Hannah, as leader pro-tempore of the Coalition Party, was still no nearer to defining its mission. This lack of clarity; absence of purpose; cannot continue for too much longer. To launch a new political party is no easy matter. If it is to have the slightest chance of success, such a party must impress upon the nation’s consciousness a very clear idea of what it stands for, and what it proposes to do. Failure to make this impression can only result in even potentially supportive voters turning away in confusion and disappointment. Hannah should know that time is running out.

Her task is made no easier by the signal failure of the Coalition Party’s predecessor, Destiny NZ. Founded by Brian Tamaki in 2003, the party left nothing more than the tiniest of ripples on the surface of New Zealand’s electoral pond. It received just 14,210 votes (0.62 percent) in the 2005 General Election. This lack of voter interest must have come as a crushing blow to Tamaki who, right up until election day, believed that the Lord would deliver dominion into his hand. He disbanded the party in 2007.

Perhaps it was this experience that lay behind Brian’s clumsy attempt to relaunch his “brand” by reaching out to those he had so trenchantly attacked in the past. If so, then his strategy is fatally flawed. A leopard is a leopard: red in tooth and claw; so any attempt to pass it off as a pussy-cat is doomed to fail.

A much more effective strategy would be for the Tamakis to make a virtue of their leopardness. To declare unequivocally that a leopard, red in tooth and claw, is exactly what this country needs to vanquish the regime of sin that is fast driving New Zealand to destruction.

In other words, Brian and Hannah should go full “Handmaid’s Tale”, and forget all about trying to be “Modern Family”.

Such a stance would at least reflect the Tamakis’ authentic theological convictions. They are believers in Dominionism, which Wikipedia defines as: “[A] group of Christian political ideologies that seek to institute a nation governed by Christians based on their personal understandings of biblical law. Extents of rule and ways of achieving governing authority are varied.”

Unvarying, however, is the Dominionists’ utter rejection of the longstanding secular principle that matters of religion and politics should be kept separate. As in Gilead, Brian and Hannah would seek to establish a righteous nation, ruled by the godly, whose first duties must be the extirpation of sin and the redemption of sinners.

Achieving that “governing authority” by means of the ballot-box – which is clearly the Tamakis’ preference – requires a political platform with more to offer than covered heads and modest attire. As Poland’s “Law & Justice Party”, and Hungary’s “Fidesz” (both frighteningly successful electoral vehicles) have demonstrated, social conservatism, garnished with fundamentalist Christianity, is not enough. Populist Christian conservatism only succeeds when it is associated with an unwavering commitment to the institutions of the welfare state and unwavering support for the values and living-standards of a beleaguered working-class.

Are Brian and Hannah Tamaki up for that? If they are, then they’d better get their skates on.